The Georgia Association of Educators named Gov. Brian Kemp, a number of other top officials in the state, and Paulding County in the suit. 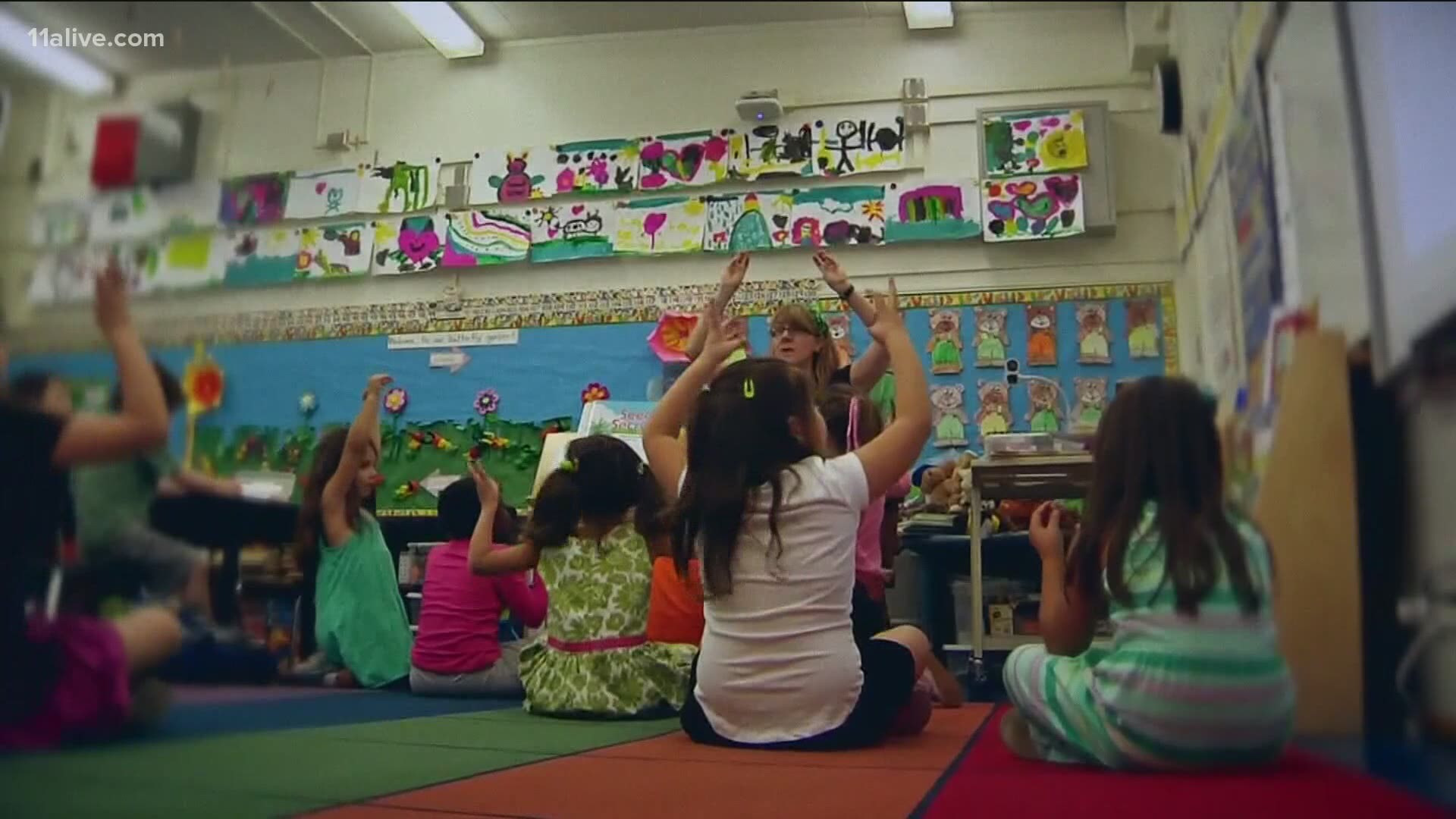 ATLANTA — Georgia's largest teachers' association on Thursday announced it was filing suit against the state over policies it argues "have put the health and safety of Georgia's 1.8 million public school students at risk."

The Georgia Association of Educators named Gov. Brian Kemp, a number of other top officials in the state, and Paulding County in the suit, which was filed in Fulton County Superior Court.

The organization is suing to get the state to establish binding statewide standards for school reopenings, which so far Gov. Kemp has not done, leaving it to local districts to determine how best to proceed.

It asks that those standards be "reasonably calculated to ensure that schools operate safely in the midst of the COVID-19 pandemic and consistent with the guidelines issued by recognized public health authorities such as the CDC."

State School Superintendent Richard Woods said in a statement that, "at the end of the day, the Georgia Constitution provides for the local control of public schools."

He said there was a "misconception that the State School Superintendent has unilateral authority over all operations of public schools" and that the suit "is asking the Georgia Department of Education to exercise authority we do not have."

In her own statement, GAE President Lisa Morgan said in part, "Decisions by some of our leaders have led to classroom and school environments that endanger our children. As an organization of educators, that goes against the very nature of who we are and what we do for our students every day. That is why today GAE, along with other plaintiffs, saw the need to file suit.”

The GAE also made special note of a situation from the first week of Paulding's reopening back in early August, when a photo of a packed high school hallway went viral nationally.

Reports from the Georgia Department of Public Health have shown that new COVID-19 outbreaks in the state have increasingly come from schools. The state definition for an outbreak, however, is a limited one ("laboratory-confirmed COVID-19 in two or more people (students or staff) with symptom onset/collection dates within a 14 day period who are epidemiologically linked, do not share a household, and were not identified as close contacts of each other in another setting during standard case investigation or contact tracing.") and it's not clear how many total cases have stemmed from schools.

Generally, cases have trended downward in Georgia since peaks in July and August, even with the opening of schools. Cherokee County, for instance, reported 100+ cases in the school district the first two weeks after opening in August after opening for in-person classes, and only 20 in its latest update.

But many Georgia counties still do not come very close to meeting CDC guidelines that establish the lowest risk of transmission in schools as fewer than five new COVID-19 cases per 100,000 residents over a two-week span.

According to the Department of Public Health, in Paulding County, one of the subjects of the suit, cases per 100,000 residents over the last two weeks stands at 68.

None of metro Atlanta's "core four" counties - Fulton, Gwinnett, DeKalb and Cobb - are below 96, though some in-person instruction has already begun in Gwinnett, Fulton and Cobb counties. Some students in the Atlanta Public Schools system will return later this month, too, and DeKalb could soon follow suit.

“Educators fully understand the preferred option of in-person instruction,” Morgan said in her statement. “We want to be in our classrooms interacting with our students and providing them the instructional experiences we know provide them the best learning opportunities. However, our overriding concern is the welfare and safety of our students. It would be absolutely devastating to the school community to know that one of our students became seriously ill or worse simply because in-person instruction was mandated over virtual.”

At a press conference this week, the governor said he felt local teachers, administrators and school boards had done a "great job" dealing with the balancing act of reopening in the pandemic.

"This is not something new to them, obviously COVID-19’s new to them, but dealing with viruses - whether it be a flu virus, a stomach virus, what have you - our educators and administrators have had to deal with this kind of thing before and we'll continue to help them along the way and work with them," Kemp said.

Woods, in his statement, said the state Department of Education had issued guidelines for districts in partnership with the Department of Public Health, and that "unlike several states, Georgia schools retain the authority to remain fully virtual instead of being required to offer in-person instruction."

"Respectfully, if GAE had reached out to me to sit down and seek solutions to common challenges, I would have done so – just as I have always done so – but they did not," Woods said. "I have spent the first months of the school year visiting schools all over the state and speaking directly with teachers on the frontlines. I am always open to the feedback of our teachers and education organizations, but those conversations can’t take place if the first time I hear of a concern is in the pages of a lawsuit."

He added he was "hopeful this complaint can be resolved in a manner that is in the best interests of all teachers and students in our state.”