With the capacity to test up to 5,000 people per day, demand so far at Georgia's largest testing site near Hartsfield-Jackson airport has been lower than expected. 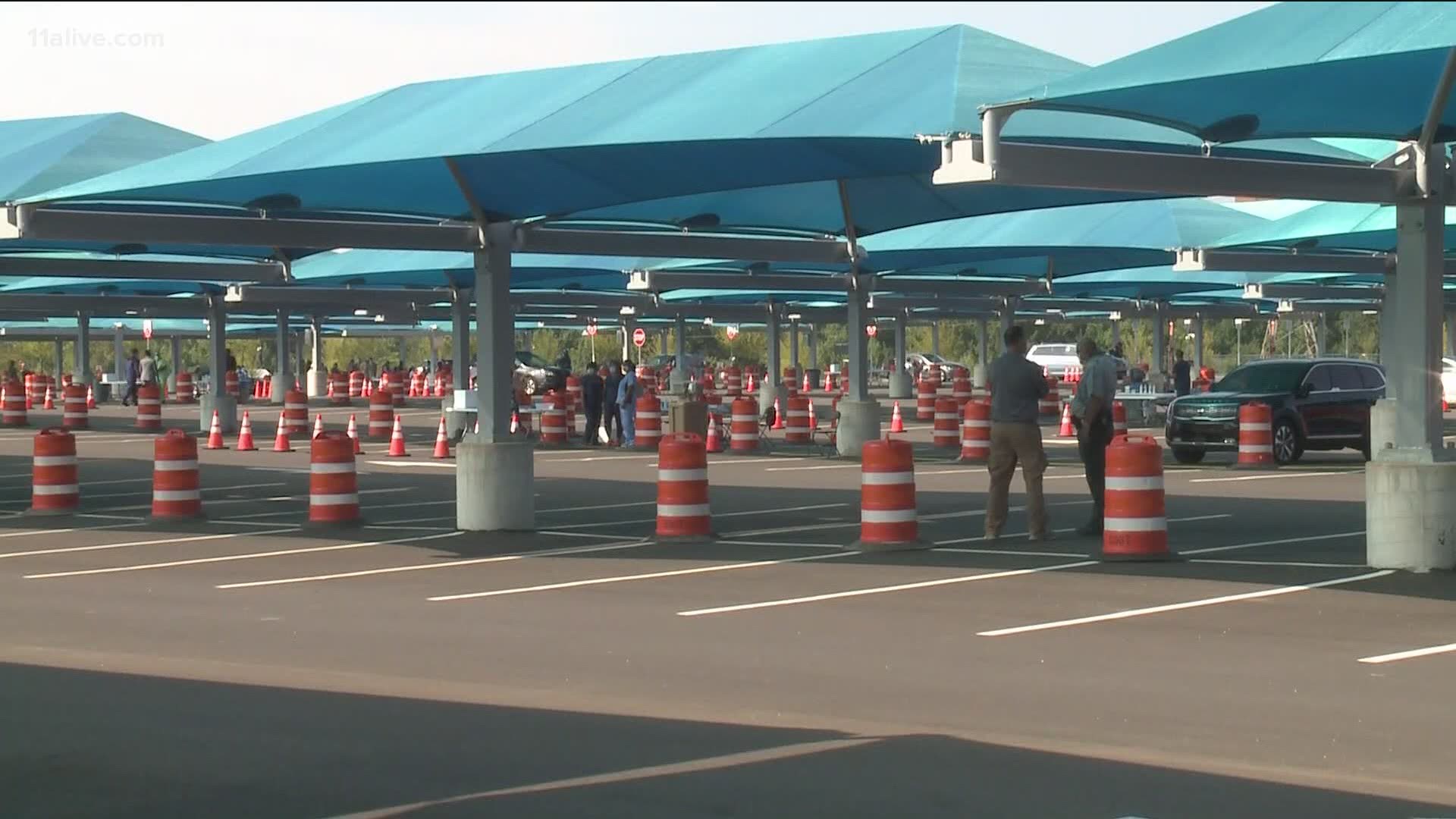 ATLANTA — Data from the state health department shows what has been called Georgia's 'mega-testing' site has been using less than a third of its daily testing capacity.

On the site's opening day one week ago, 11Alive News talked with U.S. Surgeon General Jerome Adams, who joined Governor Brian Kemp for a press conference to announce the opening of the site.

"This site is all about volume making sure we can get as many people tested in a surge capacity as we can over 12 days,"  Adams said in an interview with 11Alive.

Located in a parking lot near Hartsfield-Jackson Atlanta International Airport, the site officially opened through a partnership between state and federal health officials.

Monday, Aug. 10 was the site's soft opening and despite setting an initial cap on testing at 500 people, 695 were tested.

Numbers from the Georgia Department of Public Health show only a fraction of the site's capacity has been used since Monday.

From Tuesday through Friday, the site had the capacity to conduct 20,000 tests. Only 29 percent of that capacity was used according to the GaDPH data.

The testing location in Clayton County is closed on weekends, and, as of this morning, 1,440 people were pre-registered to be tested today.

"Fifteen hundred more people being tested per day is good, but it is a drop in the bucket. We need to be testing far more than that," said Shah who is an epidemiologist and associate professor at Emory.

Shah has been involved with testing efforts in Fulton County since the beginning of the pandemic.

"Testing in Georgia has been improving, but it is far behind where it needs to be," she said. "There are targets that are set based on a number of epidemiological parameters and we are still well below where we need to be."

Shah believes surge testing sites are needed and the location near Hartsfield-Jackson should remain open for more than its scheduled 12 days.

Currently, it is scheduled to close on August 26, but it could be extended according to federal and state officials.

"We need to be surging and providing that ramped up test capacity for the next 6 to 12 months. This epidemic is going to be with us and it's not going away anytime soon."

In addition to increased testing options, Shah said more still needs to be done to cut down test results wait times, with instant results being ideal, but said that one day wait times is a good goal.

"We need that test turn around time to be as short as possible so people can notify their contacts and those people can take the steps they need to isolate themselves and get tested immediately so we can stop the cycle of transmission," Shah said.

State officials quote turn around time at the 'mega-testing' site as 48-72 hours.

The site running below capacity could be due to various reasons. Shah said it can take time for people to learn of new testing sites and turnout could increase in the coming days.

When asked about turnout numbers at the mega testing site, GaDPH spokeswoman Nancy Nydam by e-mail wrote, "Testing demand has been down overall the past couple of weeks – it’s a trend we’re seeing around the country, too."

"The site has provided testing for thousands of Georgians in the first four days of operation," Nydam wrote in a separate statement. "That is success in and of itself given many of those people might not have gotten tested if this site was not operational. Testing is crucial to contact tracing and preventing further spread of COVID-19. We have the capacity to test as many as 5,000 individuals a day at the site, and we continue to encourage Georgians to take advantage of this location and get tested."

A federal official tells 11Alive that states can request extensions of testing sites that are run through a partnership with Health and Human Services. Nydam confirmed there have been conversations about an extension, but no decisions have been made so far.

Testing is available to all Georgians regardless of symptoms, according to a press release from GaDPH.