In guidelines from the White House, states are directed to begin reopening after their number of COVID-19 cases have trended downward within a 14-day period. 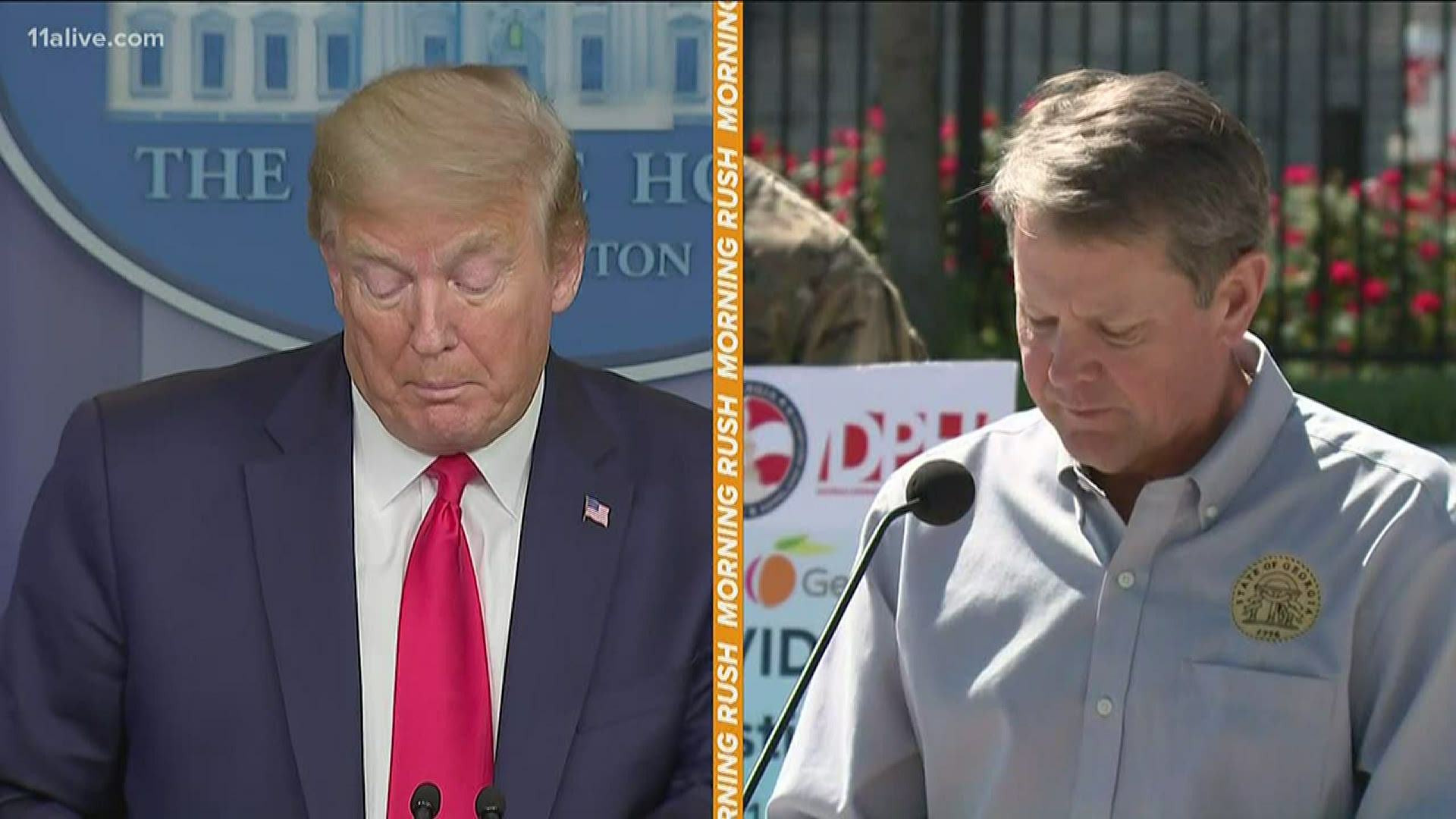 ATLANTA — Governor Brian Kemp's decision to allow certain businesses in Georgia to reopen as early as Friday has been met with both relief and criticism.

Kemp has previously stated he believes data shows daily COVID-19 cases have declined over a 14 day period, but part of the criticism is based on an opposing belief that case numbers haven't declined over that same period.

A 14-day downward trajectory of documented COVID-19 cases is listed as a guideline from the White House, to be met before states begin to reopen.

"What I think we are seeing is there continue to be cases in Georgia," Dr. Carlos del Rio, infectious disease expert from Emory University said. "What we have seen is a slowing in the number of cases and the progression. We have seen an increase in the doubling time in Georgia and those are important things. But we aren't yet seeing a decline in the number of cases."

del Rio said as he looks at data for COVID-19 in Georgia, he doesn't see how the state is meeting the White House guidelines as of Thursday.

"Told the Governor of Georgia Brian Kemp that I disagree strongly with his decision to open certain facilities, which are in violation of the phase one guidelines," Trump said.

On Wednesday, during a live interview on 11Alive News, Gov. Kemp was asked about the decision to allow select businesses to reopen.

11Alive News anchor Jeff Hullinger said, "What kind of data are you seeing, perhaps that others aren't? The White House guidelines show that there needs to be a drop of 14-days. We haven't seen that so far. Are you seeing different data from what they're seeing and the rest of us are seeing?"

"We believe that we are seeing that data and that we will meet that criteria when we start opening back up," Kemp replied.

When asked Thursday by e-mail about the specific data showing how the state is meeting the federal guidelines, a spokesman for Kemp's office directed 11Alive to data updated daily on the Georgia Department of Public Health's website.

The Georgia DPH data for daily confirmed COVID-19 cases in Georgia show on April 10, which is two weeks before the first wave of businesses can reopen, there were 797 new confirmed cases. Over the following two days, the number of cases declined, but then spiked again on April 13-14, to more than 800 new cases a day.

Over the past week, the number of confirmed cases per day has continued to move up and down, with 58 new cases being reported Wednesday. But the data includes the following footnote: The most recent days of these trend data are impacted by a reporting lag that varies based on how the case is reported to public health and are subject to change.

"I will tell you that there are other models that we could have pointed to that showed our peak was back on April 6. I didn't make this (decision) just based on some model, because as you know Jeff, the models have been all over the place. They continue to move. We are looking at a lot of different models," Kemp said during the live interview Wednesday.

RELATED: 'In shock': Despite what governor says, salon owners hesitant to reopen

When asked on Thursday, the governor's office didn't provide details of the "different models" Governor Kemp was referencing in his interview.

The governor continued on to describe the reason for originally ordering businesses to close was to flatten the curve of COVID-19's spread, lower the number of hospital bed's being used statewide and to find time to stock-up on PPE (personal protective equipment) and other medical supplies for front-line healthcare workers. Those are all items Kemp said his administration has since accomplished.

"This isn't a mandate for them to open their business," Kemp said. He added that he made his announcement on Monday, to give many business owners at least several days to prepare to open if they choose to do so on the first possible day.

"We have to trust our entrepreneurship in this state, we have to trust human nature that our business people for their financial future are going to make sure they're doing things the right way," Kemp said. "I talked with a business owner that has got a fitness center club and they're hiring an epidemiologist to help them basically format their business so they can keep their clientele and employees safe."

del Rio agreed preventative measures, including social distancing, must remain priorities, whether cases are declining or not.

"People say, 'Oh, we've passed the peak, we are done.' Well, no we aren't done," del Rio said. "It is no different than saying, 'I'm going to go up Mount Everest. I got to the peak. I'm done." No, you still need to come down from the peak, and coming down could be just as dangerous as going up."

del Rio is the chairman of the global health department at Emory University and also the dean overseeing physicians at Grady Memorial Hospital.

To track the transmission of COVID-19, del Rio referenced a collection of data published online tracking each state's r-naught, which represents the reproductive rate for the virus. The tracker was launched by the founders of Instagram, Kevin Systrom and Mike Krieger.

del Rio said for COVID-19 the r-naught number can reach two-and-a-half to three.

"That means for every infected individual, two-and-a-half to three people get infected," according to del Rio.

The goal he added is to lower the r-naught number, or the rate at which the virus is spreading, through social distancing and other measures to below 1.

"You can see almost 4 weeks ago, no state was below 1," del Rio said, with the tracker listing only Washington state as an exception. "You can see where we are today. Where we are today is many states are moving (downward) and Georgia is right at 1. So we are coming down."

An r-naught number approaching 1 represents a flattening of the curve for COVID-19, according to del Rio. A number below one would represent a scenario where cases would then begin to decline he said.