The governor spoke to 11Alive's Cheryl Preheim on the same day he announced he would be extending a public health state of emergency. 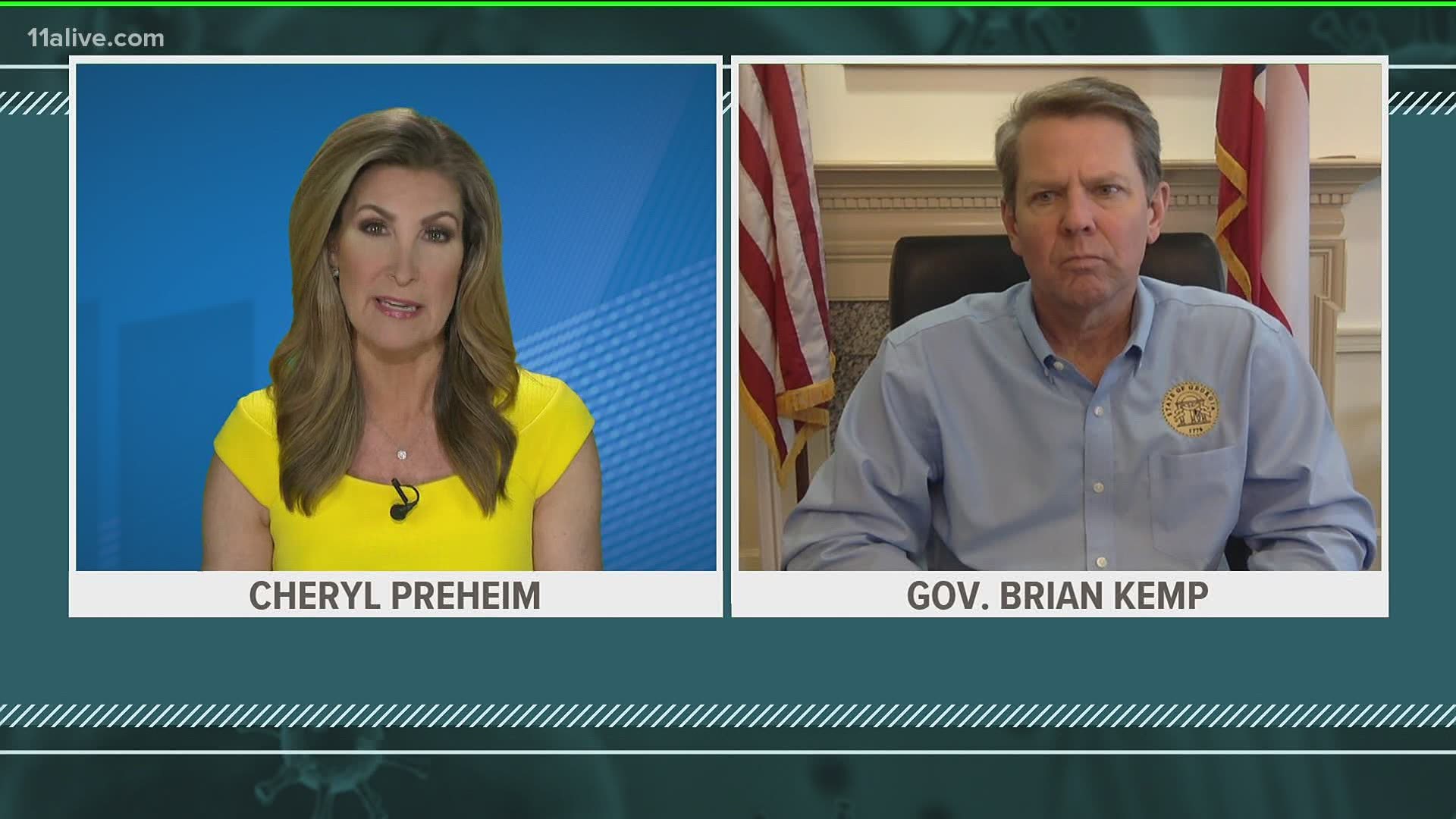 ATLANTA — Gov. Brian Kemp explained what indicators he sees that show Georgia has flattened its curve for the time being in the fight against the novel coronavirus, and said the state was still preparing for a resurgence of the virus in the fall.

The governor spoke to 11Alive's Cheryl Preheim on the same day he announced he would be extending a public health emergency and a shelter-in-place order for the medically fragile and elderly into mid-June.

For all other purposes, his order that kept the state closed through April 30 will expire at midnight, and he already began relaxing restrictions on certain businesses within the last week.

Kemp pointed to some of the data he feels indicate Georgia is on the right path and ready to begin opening up - he said April 30 was the lowest day "in a long time" for ventilator use in Georgia, and he said that while cases continue to go up, that it's a product of the increase in testing public health officials have prioritized.

Here is his conversation, in full, with Cheryl:

On the decision to extend the state of emergency

I had some conversations with Lt. Gov. (Geoff) Duncan, Speaker (David) Ralston, they both agreed we needed to extend the order. That gives us the ability through the Department of Public Health and other emergency powers to continue all the good work we've been doing in recent days to ramp up our testing - we've seen a record day this week, really some exponential growth there, and we need to continue to do more. But it also allows me the ability from a waiver perspective - dealing with potential outside doctors and nurses from outside the state coming in, hospital bed capacity issues - there's just a lot of reasons to extend that to make sure that we can have a hundred percent response to COVID-19 in the state of Georgia.

Well it's a big part of it, that's some of the data that we're following, those numbers literally every day - I get an update seven days a week on that. We had the lowest ventilator use today than we've had in a long time, our hospital bed capacity continues to be in really good shape, and that's really what all these previous orders were doing, was allowing us time to help flatten the curve and really build up that capacity.

And now that we've done that I felt like it was time for us to move forward, continuing to focus on the people that are really affected by this - that's those in our long-term care facilities, the elderly and the medically fragile - but also easing up on the shelter-in-place for other Georgians, because they have done what we asked. They helped us flatten the curve and build that infrastructure out, and also our testing and contact tracing is starting to ramp us well.

I think that's really the message I have to people - is number one, thank you for helping us flatten the curve and help us have the time to do all this work and be prepared. But also I feel like it's time to free them up a little bit, it's time to get our economy back started. We cannot continue down this road where we're going to have depression-like unemployment if we do, and we're going to have people that are going crazy trying to get food and medicines for their families, and that's not what we want in this state or what we want in this country.

And we're taking a measured step forward to allow that, but we also got to continue to have our citizens be part of the solution and not part of the problem. We still have the social distancing requirements in place, we have a large gathering ban in place, we're continuing to keep some establishments closed like bars and nightclubs and entertainment venues. We'll continue to watch the data as we move into Phase Two about easing up on that, but even though we're freeing people up to move around a little more than they have, we do need them to wear a mask if they're going to the grocery store, going to the pharmacy.

I've talked to Dr. (Kathleen) Toomey about that, that's what she does. But when she goes to the neighborhood park to walk her dog, she's not wearing a mask and she can socially distance herself from people. She's in an open air environment, so we just need people to use that good common sense and I know our business community, those that decide to open - and that was not a mandate, that was a choice - they have done a great job of following the guidelines that we have to protect themselves, their employees as well as their customers.

On the number of cases continuing to go up

Well there's a lot of different metrics that we're following every day and I know it is kind of counterintuitive to people when they see the number of cases that are going up - that is actually a good thing, because it means that we're testing more. But what else is good that we're seeing right now - we're really watching this trend - the number of tests are going up, but the percentage of the positive cases to the number of tests continues to drop. And that's what we want to continue to see, so we're testing more, but he number of positives we're getting - that percentage is dropping, so that is a very good sign.

You know we're not going to get rid of the virus. None of these things that we're doing is designed to get rid of the virus. It's designed for us to be able to have the healthcare capacity and to meet the needs of any patient in Georgia that needs a hospital bed or needs medical attention. That's what the guidelines at the federal level were designed for, we met those guidelines to move into Phase One, so that's what we've done. But we've got to continue to make sure that as we're going to see community spread, we don't need it to turn into a hot spot or an epicenter. If people are following these best practices, were going to continue to see these good numbers that we have as we go forward.

On preparations for the weeks and months ahead

I continue to be in touch with a lot of our hospital CEOs on the bed capacity issue, and actually these discussions about slowly reopening Georgia's economy, they were a big part of that. They've got so many empty hospital beds, they're becoming financially not viable. That is the big concern to them, that's the last thing we need, is for our hospitals to start laying off nurses and doctors and closing their doors because they're not financially viable. We've sent a signal that they can start some of these elective surgeries back that'll put people back to work, but also get some good health outcomes for their patients, so they're in support of those type things.

But everybody realizes - and we're hearing this certainly from the White House and Dr. (Deborah) Birx and Dr. (Anthony) Fauci - everybody's got their eyes on the fall. Once we kind of get through where we are now here, hopefully the next two or three weeks, next month or so, move into a different phase - we also got to prepare for a rebound this fall. If the virus comes back, you know, who knows what that's going to look like, who knows if we won't have medical treatments available then - there's some promising things out there, potentially a vaccine. I'm not the expert on that, there's a lot of really smart people working on that issue, and I certainly hope and pray that they're successful.

But a lot of the things we're doing we stood up to be in place or a long time. We knew this wouldn't be over in June - it'd maybe calm down in June and life may go back to a relatively normal format, with certainly a new world order from social distancing and things of that nature - but we also know that we got to prepare for this to come back in the fall and continue to do that, quite honestly, until there is a vaccine or some sort of medical treatment.