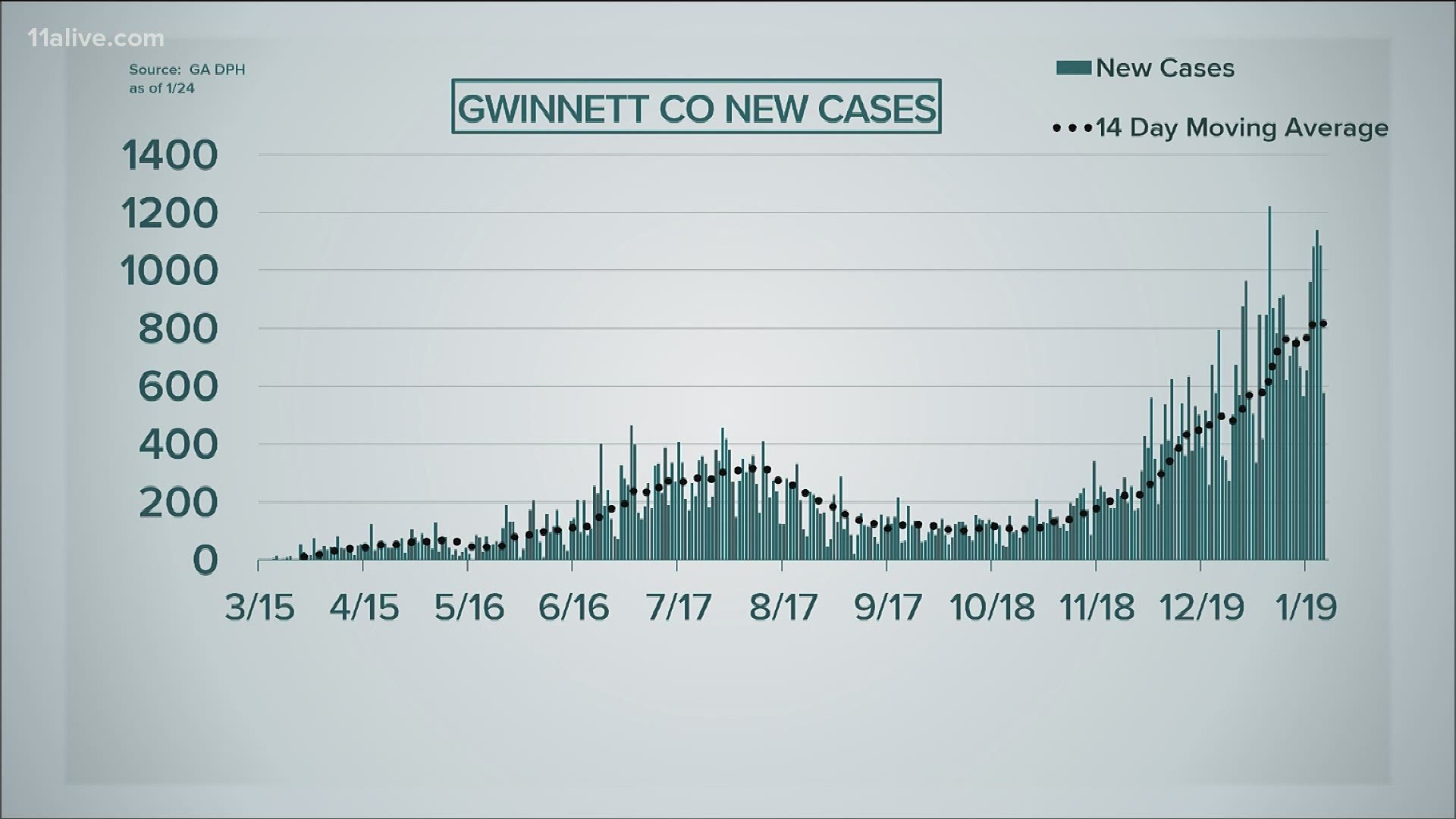 Three days last week, Gwinnett recorded more than 1,000 new COVID cases each day. While none beat the record the county set on Jan. 8, 1,220, it did look like things were receding in the 10 days following that record before last week's renewed upturn.

An instructive comparison comes in neighboring Fulton County, which also saw a record on Jan. 8. On that day, Fulton recorded an all-time high of 1,099 cases. But in the days that followed, the county's numbers have dropped to where it saw roughly half of Gwinnett's count on the three days to end last week.

(The counties saw more comparable numbers Sunday, when reporting is deflated on weekends.)

The chart below shows the comparison of new cases between Fulton and Gwinnett counties since Christmas Eve. Gwinnett's new cases are reflected in blue, while Fulton's numbers are in orange.

The same is broadly true of DeKalb and Cobb counties. According to state Department of Public Health data on its website on Jan. 25 as of 4 p.m., Gwinnett had 1,009 cases per 100,000 residents the last two weeks.

There's no easy answer as to why Gwinnett so distinctly elevated, but the communications director of the Gwinnett, Newton and Rockdale Health Department said at least some of the rise "could be due to cases just now getting reported from other testing providers."

"There’s no major event to point to other than the holidays, when we saw large spikes. Even though we’re a month out at this point, we still have widespread community transmission," Chad Wasdin said. "That is why we cannot let our guard down. We are asking the public to continue practicing the measures we know are effective at stopping the virus: social distancing (and staying away from crowded areas), hand washing, mask wearing, and staying home when sick. The more we practice the measures, the more we can stop the spread as we work to get the vaccine out for another layer of protection."

The county, meanwhile, announced on Friday that face masks or coverings would be mandatory in all county buildings and facilities, starting tomorrow.

"The mandatory face mask order is necessary to help protect County workers as they provide essential services to the public," a release said.

One thing to note is that Gwinnett is not necessarily alone.

Again, there's no clear explanation for why Gwinnett and some of those surrounding counties are so high.

And it would not appear to be a function of simply administering more tests - over the last two weeks the state reports their percent positive at 15.2%. That compares to Fulton at 11.7%, DeKalb at 11.9% or Cobb at 13.8%.