'Georgia is simply not prepared for a surge in cases and hospitalizations.' 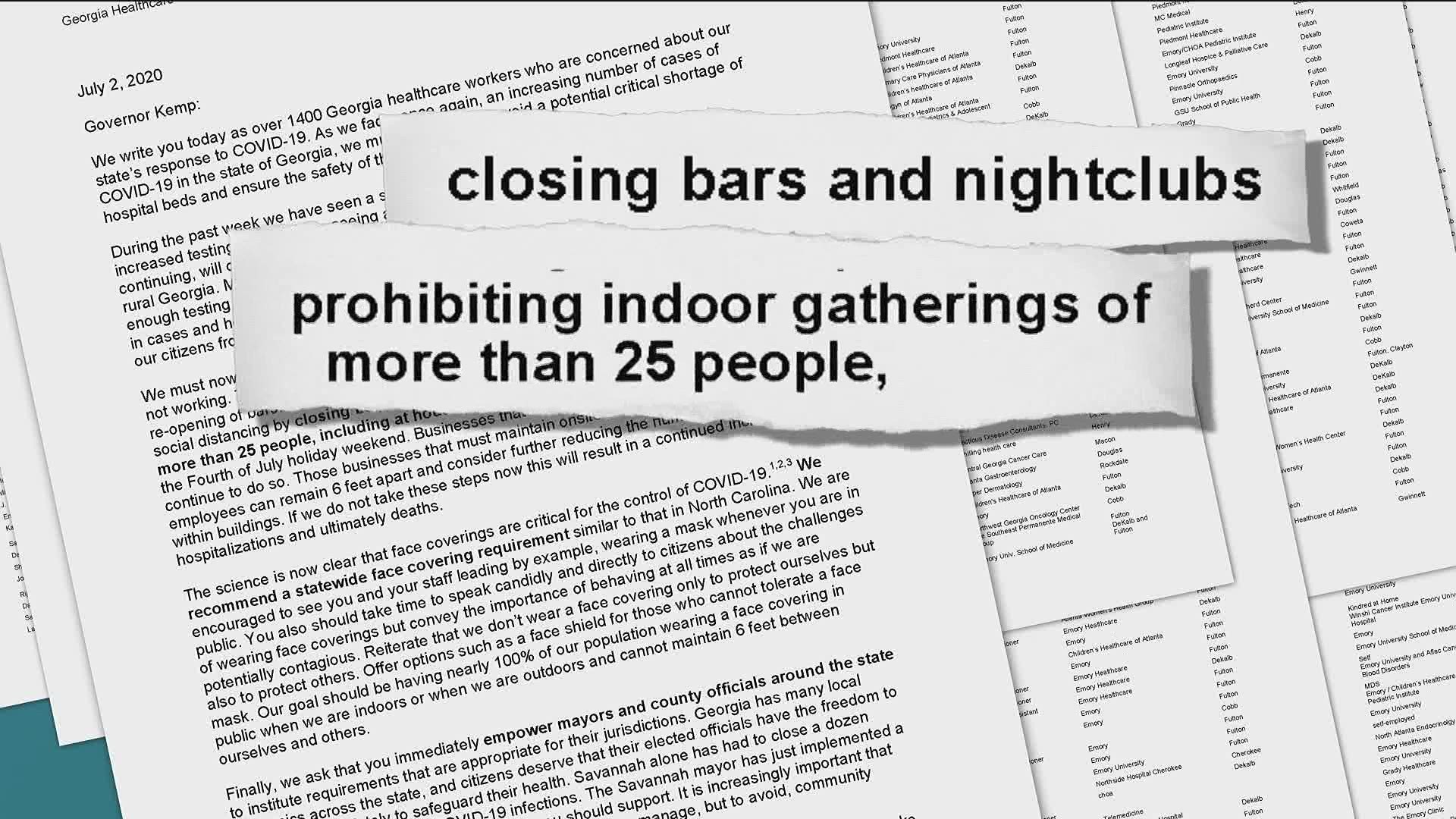 ATLANTA — As COVID-19 cases soar to new record highs and hospitals begin to feel increasing strain, Georgia, according to a letter signed by more than 1,400 healthcare workers and sent to Governor Brian Kemp on Thursday, "is simply not prepared."

According to Georgia Emergency Management (GEMA), there are 1,649 people right now, receiving care in the hospital for COVID-19. That’s more than any day since GEMA started reporting this data in May.

The rise in those statistics, the letter states, "cannot be accounted for by increased testing."

The letter calls for a number of key policy changes, including instituting a statewide mask requirement, re-closing bars and nightclubs and prohibiting indoor gatherings of more than 25 people - including at houses of worship. The doctors also want local leaders to have control on what rules residents must follow - such as Savannah's recent mask requirement.

RELATED: The mask debate | Here's why you said you were for or against making face coverings mandatory

Dr. Thompson says increased testing has helped detect the virus sooner, but attributes the surge in cases to several super spreader events. She cites Memorial Day, large social gatherings and those family get togethers where people tend to let their guard down.

The fact more young people are getting infected in this round, is little comfort to doctors. Those between the ages of 18-29 now account for 22-percent of the state's total positive cases.

"It’s not going to stay there," said Thompson. "We have much more virus circulating in the community than when we began the shelter in place order."

"If we do not take these steps now this will result in a continued increase in hospitalizations and ultimately deaths," the letter states.

Gov. Kemp has been resistant to calls for a statewide mask, in particular. While he personally endorses wearing a mask, and embarked Wednesday on a two-day tour around the state to promote mask-wearing, he has been reluctant to impose it as a legal requirement.

"Regardless of what legal action may or may not happen, we shouldn't get to that I think," the governor said Wednesday. "We shouldn't need a mask mandate for people to do the right thing."

He added that he feels the issue has become "over-politicized" and that "there's a lot of people that don't believe a mask mandate would work."

But the letter argues that while these mandates and closing parts of the state economy again will hurt, not doing so will ultimately cause longer-lasting economic damage. And without bringing cases down it says "we will not be able to safely send our children to school in the Fall which will have long lasting repercussions on their education, health, and well-being."

The letter asks the governor to "rise above the political to make the health and safety of our citizens your foremost concern."

It said action is "especially crucial in advance of the Fourth of July holiday weekend," which begins Friday.

The principal signers of the letter are Dr. Melanie Thompson, the principal investigator for the AIDS Research Consortium of Atlanta; Dr. Sophie Lukashok, the president of the Infectious Diseases Society of Georgia; Dr. Jesse Couk, the assistant director of infection control at Piedmont Atlanta Hospital; and Dr. Carlos Del Rio, a leading Emory infectious disease expert who has been one of the most visible authorities in Georgia on COVID-19 throughout the pandemic.

Does wearing a mask pose any health risks?

Jennifer Aniston: Masks being politicized at expense of people's lives

Trump 'all for masks'; says it makes him look like the Lone Ranger