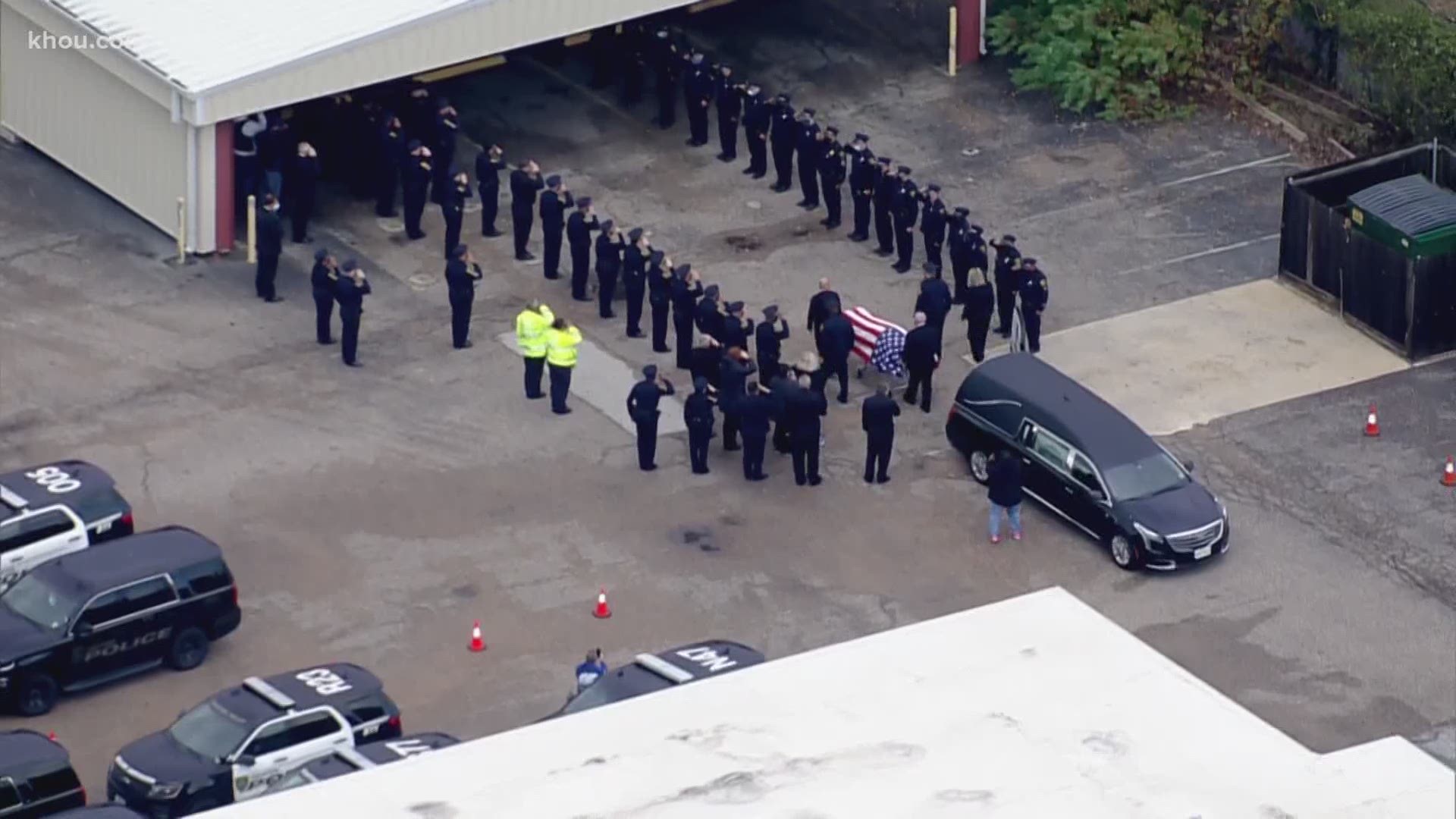 HOUSTON — Houston Police lost one of their own Friday to COVID-19.

Officer Leal had served with HPD since 1984. He started his HPD career in the Northeast Patrol Division and in the Jail Division. He moved to the North Patrol Division in 1989 where he had served ever since. Officer Leal was a part of a 13-person Differential Response Unit which focuses on getting to the root of public nuisance crimes like illegal gambling, illegal dumping and illegal massage parlors.

“We have truly lost a man who defines what it means to be a public servant,” Chief Art Acevedo said in a statement.

It is with the heaviest of hearts that we announce the death of @houstonpolice Officer Ernest Leal, Jr. He battled COVID-19 with great vigor and courage.

Thank you to all who prayed and sent thoughts of healing and comfort to him and his family. RIP faithful servant. pic.twitter.com/K9QP62te5m

On Sunday, Officer Leal was honored with a procession from HCA Houston Healthcare North Cypress hospital to the Dignity Care Center.

At the end of the procession, Executive Assistant Chief Matt Slinkard spoke about Leal's contribution to the Houston Police Department and his community.

"Nearly four decades of selfless service. That’s what a hero is about," said Slinkard. "For 36 years, he defined building others up according to what they needed, building this community up, going out every single day and serving for the sole purpose of making a difference."

Officer Leal leaves behind his wife, Dee, and children Victor, Veronica, Virginia and Vannessa. He is also survived by his mother, Rosa, two brothers, David and Marcus, and sister, Brenda. Officer Leal was preceded in death by his father, Ernest.

Officer Leal and Dee, a retired Houston police officer, are community volunteers. Officer Leal often connects with neighbors through National Night Out events. Earlier in the pandemic, he attended a vehicle parade in the Shepherd Forest Subdivision.

Officer Leal is HPD’s fifth line-of-duty death in the past year and the department’s first from COVID-19. Over the past few weeks, local law enforcement has lost several officers— some taken while in the line of duty and others to the coronavirus.

At least four COVID-related deaths of officers have been confirmed this year, including three veteran Harris County sheriff's deputies and a Harris County Precinct 5 constable deputy.

Mayor Sylvester Turner released the following statement on Officer Leal's death, as well as the death of Joel Cirilo, a public works employee who died Wednesday after battling COVID-19.

"Mayor Sylvester Turner tonight sends his condolences to the families of two City of Houston employees who died this week as a result of COVID-19.

"Houston Public Works (HPW) employee Joel Cirilo passed away on Wednesday, Nov. 25, after bravely fighting COVID-19 in the hospital for the past week. Cirilo began his career in the Code Enforcement Division on May 12, 2014. His wife is also an HPW employee. In a statement tonight, Veronica Cirilo said, 'Joel will be missed so much. He loved his job and our co-workers. He fought so courageously, but this virus has no mercy. Praying that 2021 brings no more heartache due to COVID-19. I am thankful for so many blessings Joel and I shared through the years.'

"As a city, we collectively mourn and feel the grief and heartache of losing two employees in the same week as a result of COVID-19. I ask all Houstonians to pray for the families of Officer Ernest Leal and Joel Cirilo. In their own way, they contributed to our city and made life better for all of us. I am grateful for their dedication and service to the City of Houston," said Mayor Turner. "COVID-19 does not discriminate. It is an insidious virus that has claimed far too many lives in Houston and around the nation. Each of us must do our part to stop the virus from spreading and destroying families.

"Since the beginning of the pandemic, COVID-19 has claimed the lives of nine municipal employees, three Houston firefighters, and one Houston police officer.

"The Mayor reminds everyone to continue to mask up, practice social distancing, wash their hands frequently, and get tested."