Lowery was a founding member of the Southern Christian Leadership Conference and worked side-by-side with Dr. Martin Luther King Jr. 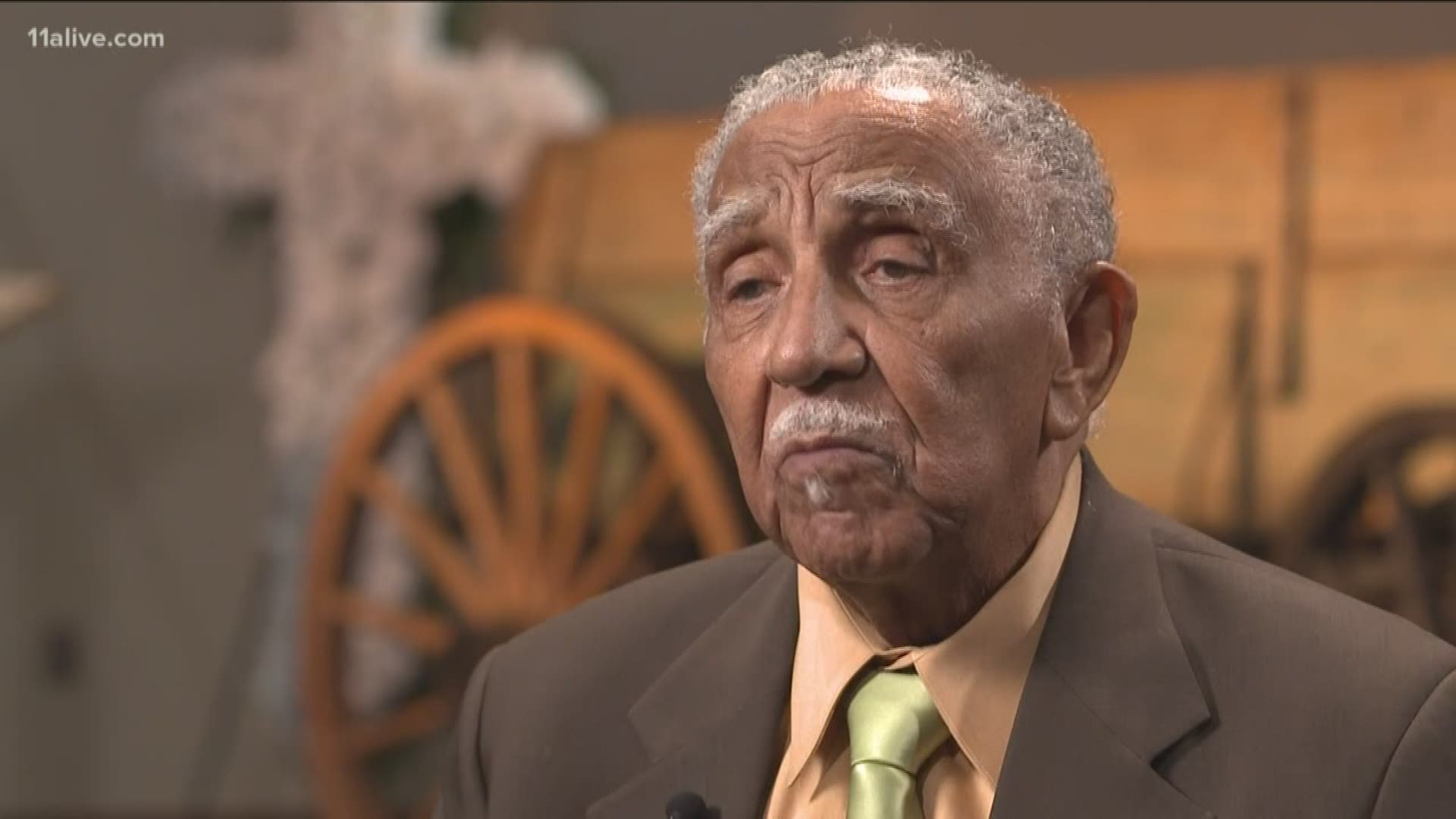 ATLANTA — Atlanta is remembering an icon with a vision and a voice -- Rev. Dr. Joseph Lowery. He died on Friday surrounded by his family.

The pioneer, warrior and civil rights activist leaves behind a remarkable legacy. Dr. Lowery had deep ties to the city of Atlanta.

Lowery was a founding member fo the Southern Christian Leadership Conference in 1957 and became the civil rights organization's longest-serving president.

Born in Huntsville, Ala., Lowery's days as a civil rights advocate date to the early 1950s when he headed the Alabama Civic Affairs Association. This organization led the movement to desegregate buses and public accommodations.

In 1961, Lowery, still in Mobile at the time, was one of four Alabama pastors whose property was seized by the Alabama courts in a historic libel suit, Sullivan v. NY Times, Abernathy, Lowery, Shuttlesworth, & Seay, because of their civil rights work. The case went to the US Supreme Court, which vindicated the ministers in a landmark ruling that clarified constitutionally protected freedoms regarding the accurate reporting of civil rights campaigns.

In March 1965, Dr. King chose Lowery to chair a delegation delivering the demands of the Selma-to-Montgomery march to Alabama Gov. George Wallace. Wallace ordered the marchers beaten in the incident which became known as "Bloody Sunday" and ultimately led to the enactment of the Voting Rights Act.

"People saw first-hand what Bull Connor represented," Lowery said. "In their living room, they saw children being swept away by the force of water hoses. They saw dogs biting the flesh of children in the park. And people could no longer deny that were fighting madmen."

Thirty years later, in 1995, Wallace personally apologized to Lowery for his conduct, as Lowery led the 30th Anniversary re-enactment of the historic march.

His long career later took him behind the pulpit to become senior pastor at Atlanta's Cascade United Methodist Church from 1986 to 1992. Upon his retirement, Lowery left the church $1 million, ten acres of land and blueprints for a new sanctuary -- which has since been constructed.

Years later, Dr. Lowery shared the stage during another historic moment in American history -- delivering the benediction during the inauguration of President Barack Obama in 2009, the nation's first black president.

"I wrote a speech about 25 years ago called, 'Everything has changed and nothing has changed,'" Lowery said. "It is very appropriate now with where we are today. We've come a long, long way. We've got more elected officials than we've ever had -- African Americans and minorities. And yet, we've got it; Everything has changed. We've even got the highest office in the land now."

Later that year, President Obama presented Lowery with the Presidential Medal of Freedom.

Dr. Lowery turned 98 in October. We were there for his birthday celebration at the Georgia Railroad Freight Depot in downtown Atlanta.

He is being remembered as a true fighter for faith and a champion of social justice who has forever left his mark on Atlanta and the world.

A family spokesperson said Lowery's death was not related to the current outbreak and spread of COVID-19.

He was married to his beloved wife Evelyn, who passed away in 2013.

Since his passing, condolences have filled social media.

Bernice King tweeted out a photograph of her and Lowery, saying it is hard to imagine a world -- or Atlanta -- without Reverend Joseph Lowery.

"I'm grateful for a life well-lived and for its influence on mine," King said. "I'll miss you, Uncle Joe. You finally made it up to see Aunt Evelyn again."

The King Center posted a photo of Joseph and his late wife Evelyn Lowery with the caption, "Together Again."

Rev. Raphael Warnock, senior pastor of Historic Ebenezer Baptist Church posted, "The Dean of the Civil Rights Movement has gone home. Praying for the family of the Rev. Dr. Joseph Lowery. May we continue to press ever forward in the pursuit of justice."

Darius Swann, who fought for school integration, dies at 95