Bottoms responds, saying it is unfortunate that Kemp "seeks to intentionally mislead the people" of Georgia with an inaccurate statement. 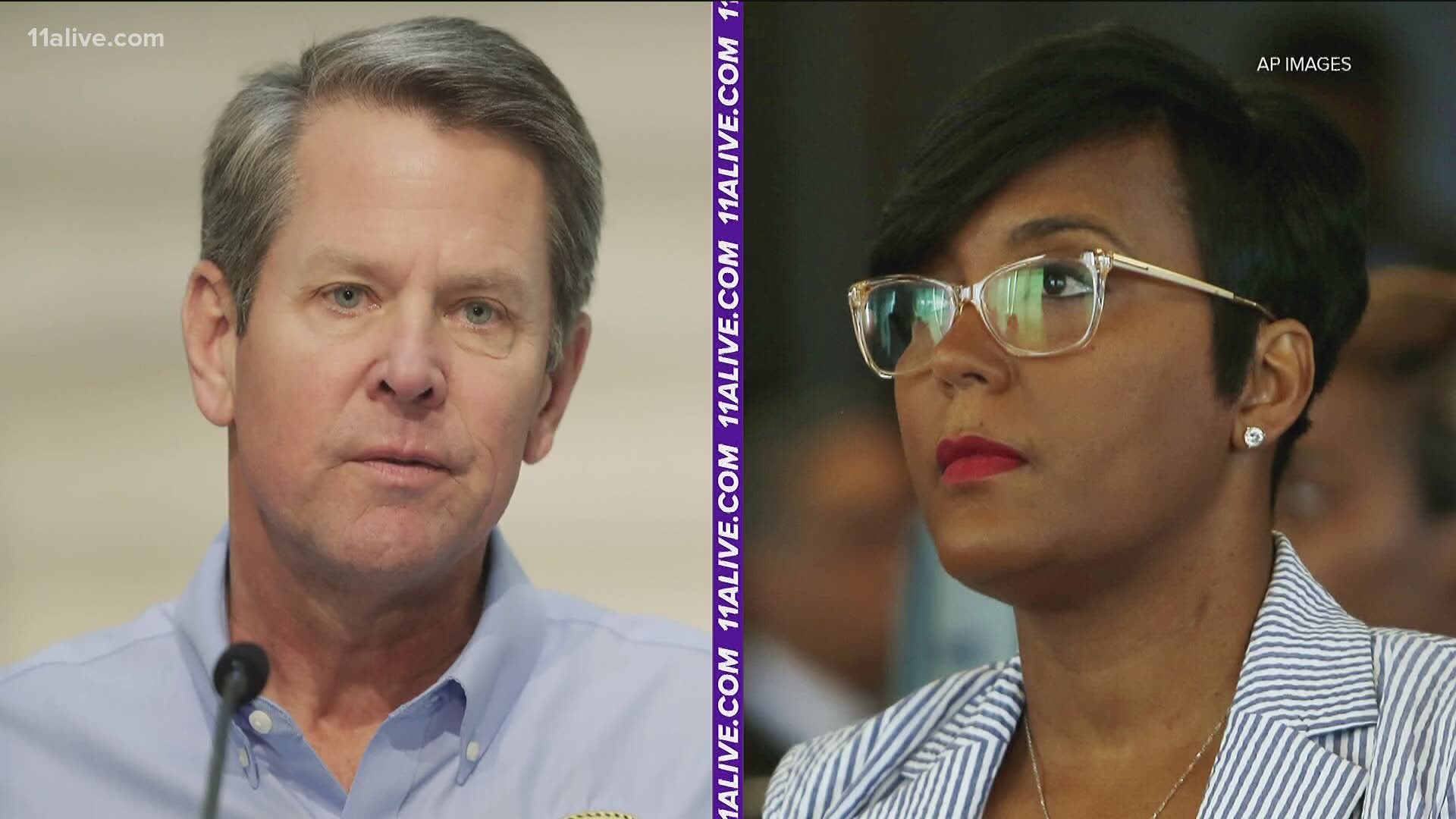 The mayor responded quickly, calling the governor's statement about their negotiations "woefully inaccurate" and saying that it is unfortunate that Kemp seeks to intentionally mislead the people of Georgia.

Kemp says that his office has negotiated in good faith with the mayor, resulting in her agreement to "abandon the city's Phase One roll-back plan, which included business closures and a shelter in place order."

However, Kemp said, he is not happy that the mayor would not agree to a settlement "that safeguards the rights of private property owners in Georgia."

"Given this stalemate in negotiations, we will address this very issue in the next Executive Order," Kemp said. "We will continue to protect the lives and livelihoods of all Georgians."

The governor's office says Kemp will address the matter in his next executive order, which he will issue by Saturday, August 15 with "relevant language."

Mayor Bottoms responded to the governor's statement Thursday afternoon with a statement of her own.

"From the start of this pandemic, my only goal has been to help save lives," the mayor said via email. "While it is unfortunate that the Governor seeks to intentionally mislead the people of our state by issuing a woefully inaccurate statement regarding our good faith negotiations and the City's reopening recommendations, I am grateful that this lawsuit has been withdrawn and the time and resources of our city and state can be better used to combat COVID-19."

Bottoms also posted a tweet referencing Kemp's statement, along with a quote by the late author and civil rights activist Audre Lorde:

“Sometimes we are blessed with being able to choose the time, and the arena, and the manner of our revolution, but more usually we must do battle where we are standing.”

Kemp filed suit against Bottoms and the city council last month in response to the way the mayor and council are handling the COVID-19 pandemic.

RELATED: Exclusive Poll: Less than half of Georgians approve of how Trump, Kemp have responded to COVID-19

The governor had argued that local leaders in the state do not have the authority to impose measures within the city limits that are more or less restrictive than those contained within any executive orders he has put in place statewide.

While the leaders of many other states have imposed mask restrictions, Kemp has repeatedly said that he is opposed to a statewide mask order, saying that his office strongly encourages mask use by Georgians.

Mayor Bottoms has taken this one step further, imposing a mask mandate within the city limits, a move that has been mirrored by more than a dozen other jurisdictions across the state.

A new 11Alive News/SurveyUSA Poll this week indicated that a significant majority of Georigans -- 62 percent -- feel that wearing masks in all indoor public places in the state should be mandatory.

Bottoms countered, rejecting Kemp's order, saying her mandate for the city of Atlanta -- which affects passengers passing through Hartsfield-Jackson International Airport -- would stand.

In addition, Bottoms said that she felt the city should return to a "Phase One" status, which would require restaurant dining rooms to close and people to work from home in addition to the ongoing mask restrictions that the mayor enacted.

Rather than listen to the two sides battle it out in court, a judge sent them to mediation, hoping that they would be able to come to an agreement on their issues.

Eventually, the governor's office issued a statement indicating that it was happy that the mayor's position on the Phase One recommendations were voluntary, not a requirement for businesses within the city limits.

Kemp's office called it a concession by Bottoms and that they were withdrawing their motion in good faith.

However, in Thursday's statement, Kemp's office said that the governor is still not happy that the mayor would not agree to a settlement "that safeguards the rights of private property owners in Georgia."

As a result, Kemp's statement said, he has directed the attorney general to withdraw his lawsuit at the present time.