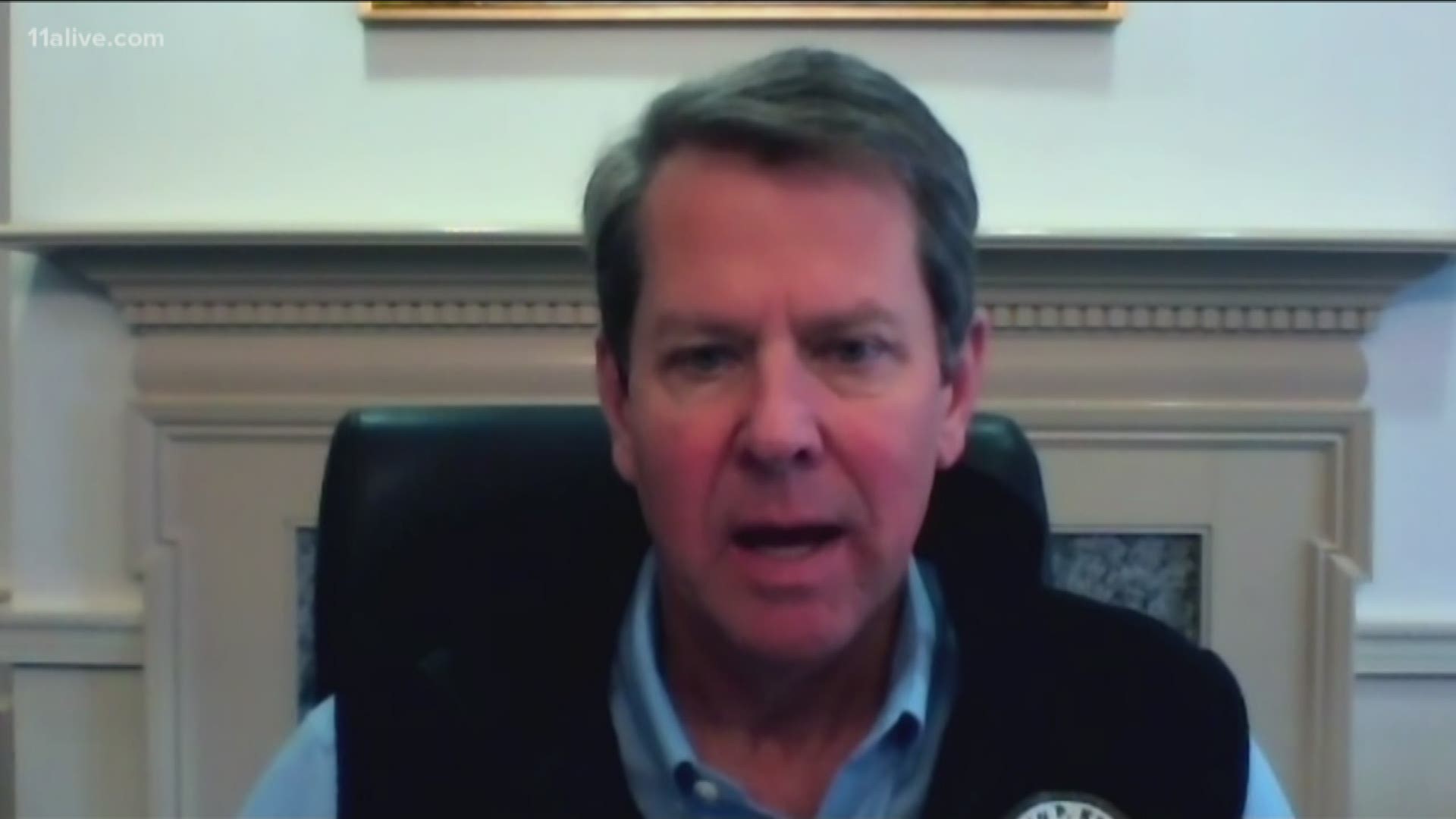 ATLANTA — The first coronavirus cases were confirmed in Georgia just a few weeks ago, but Gov. Brian Kemp thinks the illness was in the state long before that.

"There are some and I'm one of them that believe this virus has been here since potentially December or early January," Kemp said during an interview with 11Alive on Wednesday.

A spokesperson for Kemp's office confirmed on Thursday that the statement he made was based on the unavailability of testing for COVID-19. The first confirmed COVID-19 cases in Georgia were announced on March 2.

11Alive reached out to the Centers for Disease Control and Prevention on Thursday to see when the virus might have entered the U.S. and Georgia. A spokesperson said in an email that "It's not clear when COVID-19 first entered the US. CDC and others are conducting studies that may help to answer this question."

Based on reporting from NBC News and information released by the CDC here is part of the timeline for the spread of COVID-19.

Days later screenings began for the virus at Hartsfield-Jackson International Airport in Atlanta and then on March 2 Kemp called a late evening press conference to announce the first local cases.

The question now, can anything be done to look back and verify if COVID-19 existed in Georgia before those initial confirmed cases on March 2?

Jose Cordero, a professor of epidemiology with the University of Georgia, said researchers accomplished a similar task in Puerto Rico during the Zika outbreak.

"What was done, they looked back at the samples of people that were tested for fever and symptoms that were related to like dengue and others that were negative," Cordero said.

Samples for some of those individuals tested positive for Zika and helped researchers identify some of the earliest cases of the virus outbreak.

Cordero suggested, in theory, the same could now be done if specimen samples remain from people who recently tested negative for the flu or other viruses here in Georgia before testing for COVID-19 began.

With 1,525 confirmed cases of the virus in Georgia as of noon on Thursday though, M.G. Finn said backtracking to find the earliest cases of this specific virus could be very challenging.

Finn is a professor and the chair of the School of Chemistry and Biochemistry at Georgia Tech.

"Imagine if you're looking at a smooth lake and somebody throws a single rock into the lake and you see the waves come out, it is very easy to track those waves back any you will know exactly where the rock landed," Finn said. "The problem now is that it is raining pebbles."

Finn said backtracking certain viruses to a source is easier than others, depending on how a virus spreads. HIV is an example of a virus that is easier to track, according to Finn.

"Because the virus was limited to those mechanisms of course which are or intimate contact, the virus wasn't rapidly spread so it was easy to backtrack to the source."

RELATED: Coronavirus has likely been in Georgia since last year, governor tells 11Alive

With COVID-19, backtracking is complicated by the speed and method of transmission being drastically different, along with the fact that some carriers show little or no symptoms.

"The virus spreads much more easily of course because it is an aerosolized virus, spread by particles when you sneeze or cough."

There are multiple scientific methods of searching for the initial cases of a virus, some of which are inexact. However, when asked if determining the best way to move forward is more valuable at this point, Finn agreed.

"Studying it from the millionth person infected is no different in helping us create an effective response than it would be to study the one-hundredth person that was infected," Finn explained. "We do want to study people who have survived the infection, that is important. But it isn't important to get the first one."

These states have issued stay-at-home orders. What does that mean?