'The venues are packed': Labor Day parties cause concern for another COVID-19 spike

Parties planned across metro Atlanta for the holiday weekend include the celebration of Atlanta Black Pride. 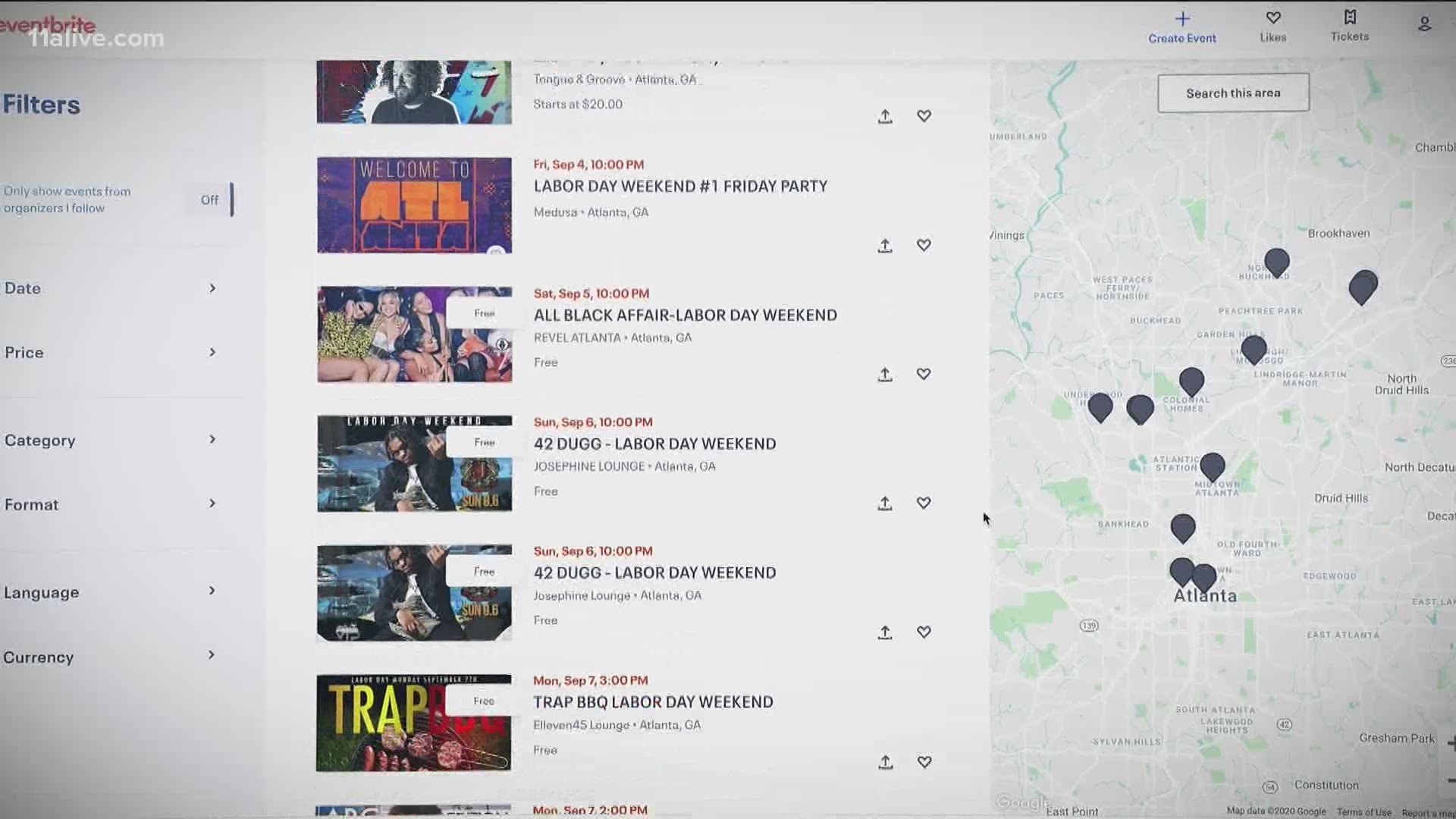 ATLANTA — Georgia health experts are concerned Labor Day weekend could usher in a new wave of COVID-19 infections just as the state’s cases have started to slow down. Despite the warning, large parties are scheduled over the next few days in metro-Atlanta, as state and local officials are doing little to stop it.

This past weekend, scenes from a packed bar provided a preview of what to expect. Video posted on social media showed dozens of people shoulder to shoulder, shirtless, and not wearing masks on the patio outside of The Heretic, an Atlanta bar.

“So, there’s no way you can tell me that you guys are social distancing. The venues are packed. There was not a mask in sight,” said Stewart.

The Heretic did not return an email or a phone call requesting a response.

RELATED: If Labor Day causes a COVID spike, it won't show in the data until two weeks after

While the festival is all virtual this year, some party promoters are hosting in-person events with the organization’s blessing if they agree to limit capacity and adhere to CDC guidelines. But Stewart recognizes it will be a challenge to enforce the rules.

“They don’t even live here. So, you come in, get a spot, you represent yourself as Atlanta Black Pride, you throw a party, something goes haywire, you leave town, we’re stuck with cleaning up your mess,” explained Stewart.

According to EventBrite, there are at least three dozen other parties scheduled this weekend in metro Atlanta not affiliated with Atlanta Black Pride.

One event scheduled, which lasts until 3 a.m. on Sunday, is promoted as “The Biggest Labor Day Weekend Party in the City of Atlanta.”

Another scheduled party shows pictures of a packed roof-top, claiming it is “Atlanta’s #1 Sunday Funday Party.”

Despite seeing a rise in COVID cases following Memorial Day and Fourth of July weekends, there is little local officials can do to stop the parties.

“I think as a general rule, I really think it’s not the best time to getting into indoor areas with numbers of people,” said Dr. Henry Wu, who oversees the TravelWell clinic at Emory Hospital.

"The COVID epidemic is like a wildfire. If the conditions are right, it can flare up even when you thought you had it under control,” said Wu.

"The City celebrates the spirit of Labor Day and Black LGBTQ Pride, and urges all residents and visitors to adhere to CDC guidelines and Orders set forth by the City and State," said spokesperson Michael Smith.

Smith went on to emphasize that COVID-19 is disproportionately impacting black and brown communities.

"If we are to curb the spread of this deadly disease, residents, visitors and organizers must take personal responsibility, wear masks, socially distance and use some common sense," explained Smith.

COVID-19 is most deadly among the elderly, but it spreads the fastest among young people.

In June, a 51-year-old California man named Thomas Macias, posted his regret on Facebook about contracting the coronavirus after he attended a party in June. A day later, he died from COVID-19.

In July, a San Antonio doctor says a man in his 30s who thought the coronavirus was a “hoax” died from the disease after attending a COVID-19 party.

In a tweet posted on Monday, Gov. Kemp recognized the risk of another spike.

“In Georgia, we experienced a surge of COVID-19 cases after Memorial Day & the July 4th holiday. To keep cases, hospitalizations, and the positivity rates trending down, we are urging all Georgians to "Keep it Small, Keep it Safe" and #MaskUpGA this Labor Day weekend. #gapol.