The health department has released a timeline of the person's weekend, so those who may have come into contact with the person can monitor for symptoms 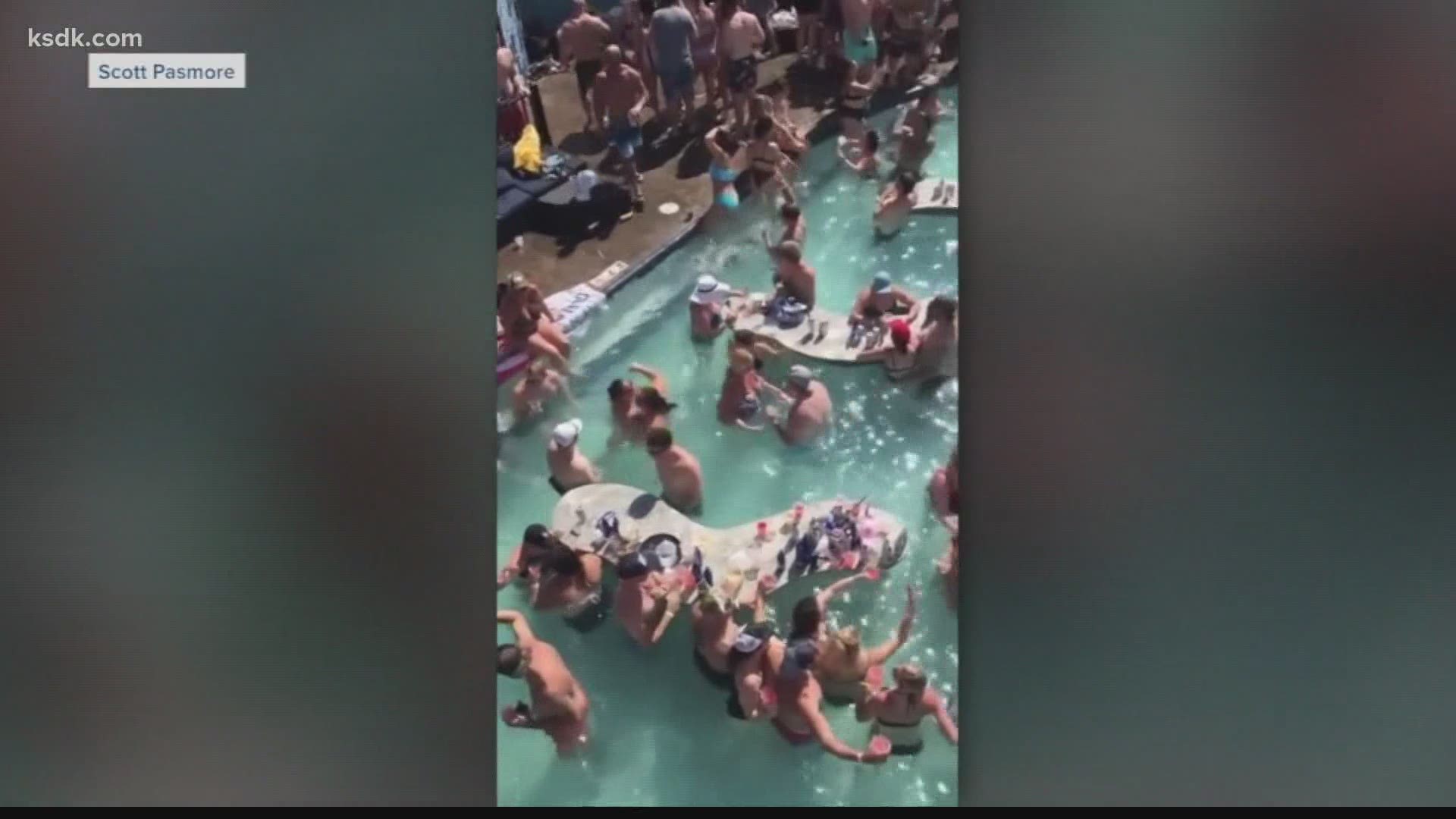 CAMDEN COUNTY, Mo. — The Camden County Health Department announced in a release Friday that a person from Boone County has tested positive for COVID-19 after being in the Lake of the Ozarks area over the Memorial Day weekend.

The person visited some of the places where pictures of COVID-19 guidelines not being followed went viral online over the holiday weekend.

The person who tested positive arrived at the lake on Saturday and started feeling ill on Sunday. The Camden County Health Department said the person was likely incubating the illness and was possibly infectious during the time they were at the lake.

Dr. Alex Garza, the incident commander of the St. Louis Metropolitan Pandemic Task Force, told 5 On Your Side that patient "absolutely" could have been contagious while at the lake.

The Camden County Health Department has released a timeline of the person's weekend, so those who may have come into contact with them can monitor for symptoms.

The timeline goes as follows:

The person's identity was not released, per health information privacy laws. However, the Camden County Health Department did say the person was from Boone County.

The health department said there have been no cases reported in Camden County residents this week.

RELATED: Task force: Lake of the Ozarks parties can only make transmission rates 'go in one direction or stay flat'

The health department is asking people who may have been in these places to monitor for symptoms such as a fever, cough, shortness of breath, body aches, headache, nausea/vomiting diarrhea or loss of taste or smell.

The viral scenes from the lake prompted St. Louis County to issue a travel advisory for anyone who went to the lake and didn't follow social distancing guidelines. St. Louis' mayor also asked residents who ignored social distancing to stay home for two weeks. 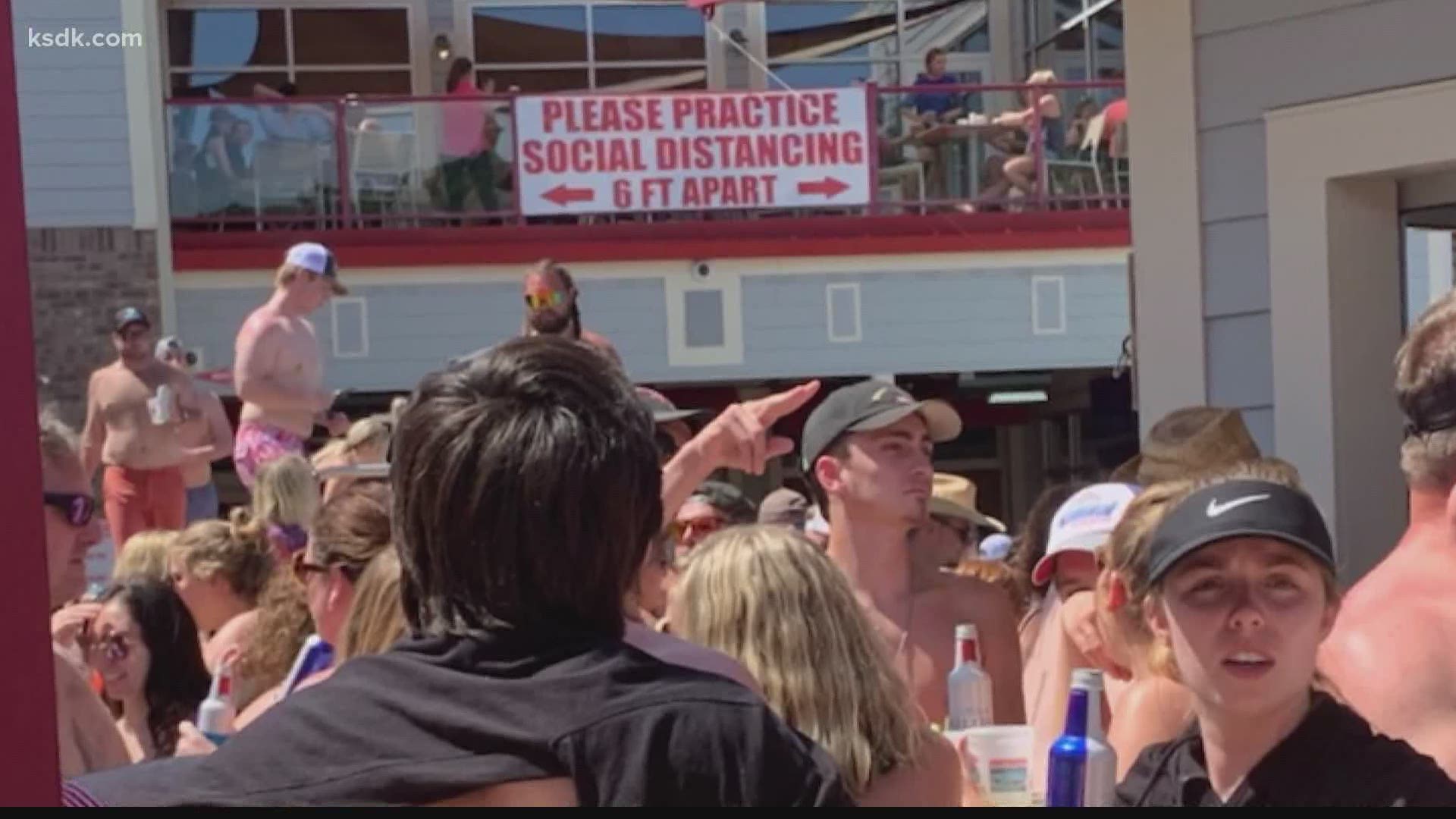 5 On Your Side spoke with an infecious disease specialist at Washington University after the scenes from the lake went viral.

Dr. Alexis Elward said crowds like that can lead to more cases of COVID-19 even if everyone there was fever-free and showing no symptoms.

"Because you can be spreading it while you're not feeling sick, and that is what is so very tricky about this virus," Dr. Elward said.

But, you can still have the virus and spread it before any symptoms show up. And for some, the symptoms can be mild.

"I can't stress enough how important it is to maintain those distances, because you can be shutting this virus before you even know you're sick," said Dr. Elward, who also said people who beat COVID-19 can also spread for weeks after they've recovered.

Doctors said we'll have to keep social distancing for the foreseeable future until there's a vaccine that is safe and widely available.

More Stories from the Lake of the Ozarks:

RELATED: ‘No laws were broken. Social distancing is not a crime’ | Owner of bar in viral photos from Lake of the Ozarks releases statement

RELATED: These people were among those at bars at Lake of the Ozarks, here's what they're saying

RELATED: 'Have fun and see you later' | Employer quarantines worker without pay after he parties at Lake of the Ozarks

RELATED: Camden County sheriff: Nothing illegal about Lake of the Ozarks parties

RELATED: Memorial Day weekend crowds at Lake of the Ozarks appear to not be observing social distancing