Our undercover video unveils the online market for desperately needed supplies during the coronavirus outbreak. 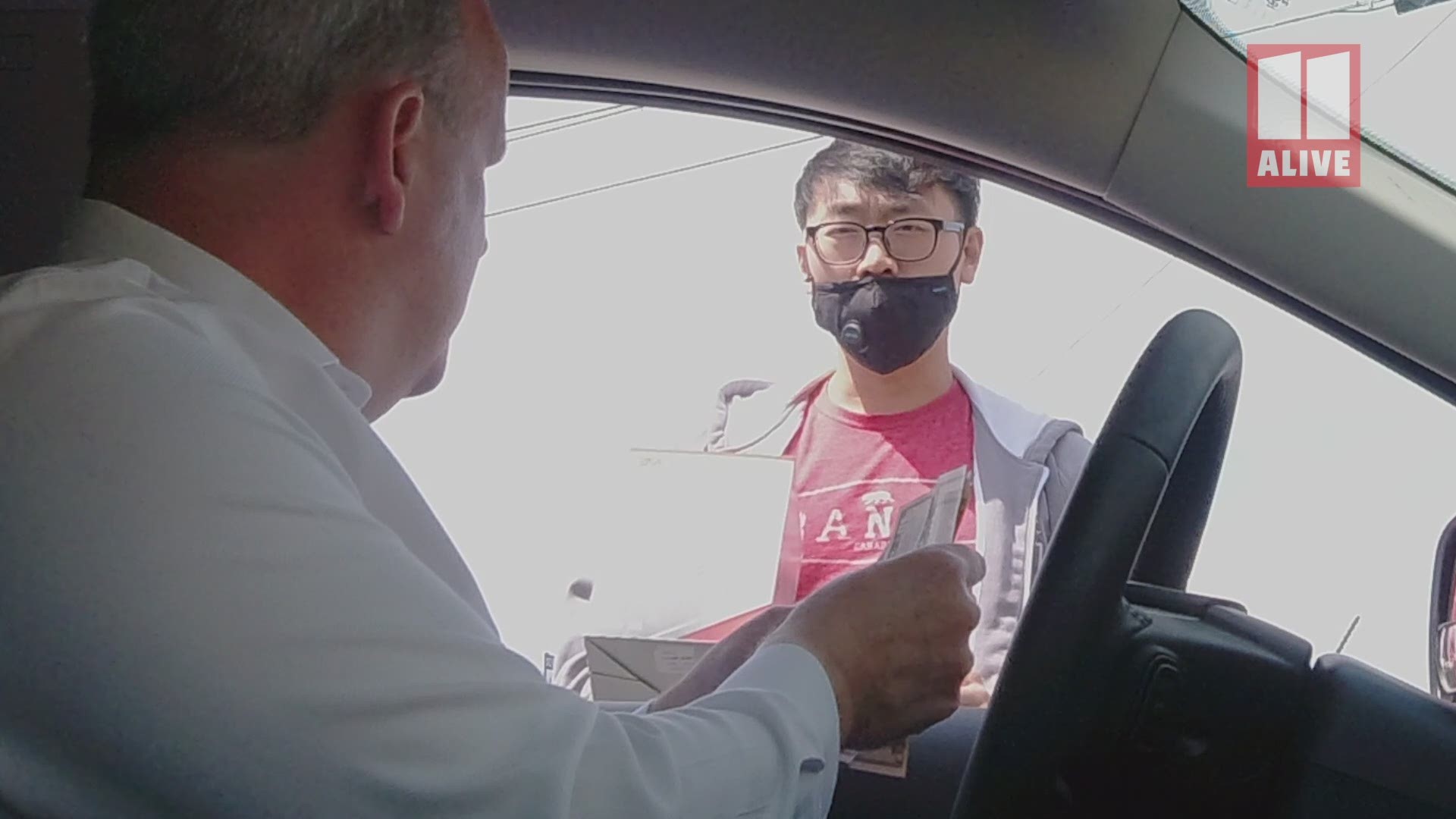 ATLANTA — Medical professionals across the country are pleading for more masks and other personal protective equipment -some even resorting to re-using these items for visits with multiple patients during the COVID-19 pandemic.

But 11Alive Chief Investigator Brendan Keefe learned that the desperate need is leading some on the front-lines resorting to taking matters into their own hands, while others are using the shortages as an opportunity to profit.

“Hey, how are ya?” Keefe asked a Craigslist seller during an undercover interview and transaction for this investigation.

Keefe bought 20 dust masks for $97 total. The same box of masks, which are now desperately needed by medical professionals and others during the coronavirus pandemic, sold for $21.47 before the outbreak.

“I mean these things are just so hard to come by, people will pay anything for them,” Keefe told the seller during the transaction.

“Well, we’re just not trying to price gouge people. We're charging three bucks. If you get more than 10,000 they just get a little bit slower than that. But I’ve heard people selling them for five, six dollars each. I had to charge that because I got these locally,” the seller said back to him.

The seller 11Alive found for this story had posted masks for sale on Craigslist. Other listings we found on the website included 30 dust masks for $250, five masks for $50 and another listed a single coronavirus mask for $15. One seller even charged up to $20 for a mask because, “These masks are really rare now so I’ve had to go up in price.”

All have since been removed and flagged on Craigslist’s website.

When Keefe asked the seller during the undercover shoot if he was selling the masks to help others or to make a profit, the man claimed both.

“Invested in this?” Keefe questioned.

“Invested, because the manufacturers, they’re not going to float anything to you right now. You’ve got to pay 100 percent up front,” the seller claimed.

On Monday the White House held a press briefing highlighting some of the various issues of stockpiling that’s been seen across the country.

“As we have received evidence recently, we have already initiated investigations of activities that are disrupting the supply chain and suggestive of hoarding,” Attorney General William Barr said. “I want to stress that we’re not talking about consumers or businesses stockpiling supplies for their own operations. We’re talking about people hoarding these goods and materials on an industrial scale for the purpose of manipulating the market and ultimately deriving windfall profits.”

The seller 11Alive tracked down for this investigation had texted Keefe videos that showed hundreds of thousands of masks that he imported from Hong Kong in the last few weeks to resell to pandemic-strained hospitals and doctors’ offices in the United States.

When we first inquired about purchasing masks from sellers on Craigslist, 11Alive told all that we wanted the masks for doctors’ offices - and that was true.

The box of 20 purchased masks from the seller we met were given to a local medical practice where they’re actively testing patients for COVID-19.

“So who’s making all of the money?” Keefe asked the seller.

“I’m selling it directly to doctors’ offices, and they’re using it so nobody really,” he claimed.

“Well, you’re not selling it at a loss though either,” Keefe asked again.

When the man was asked about his costs versus the profit he was making for selling the masks in bulk, he said it cost $2.60 to purchase the masks, while he made at least $0.40 on his own sales but that didn’t include shipping from Hong Kong.

“They used to make them for fifty cents but what’s happening right now is there’s so much demand for the cotton, for the fabrics, that [it] has skyrocketed. They’re making like 20, 25 cents. The only people really making money are the big companies buying them in bulk, depleting the supply for hospitals, and then taking them to the hospitals and selling them for six dollars,” the seller explained to Keefe, while claiming he didn’t want to sell the masks for $5 or more.

Since we began this story, the Georgia Attorney General has opened an investigation into the seller after seeing 11Alive’s undercover video.

“If you didn’t tell me that someone was in dire need of them, I wouldn’t have met you,” the seller said during the transaction.

Stimulus check calculator: See how much you'll likely be getting

Hoda breaks down on 'Today' after interview with Drew Brees