Data from the last month show a noticeable rise in the last week or so. 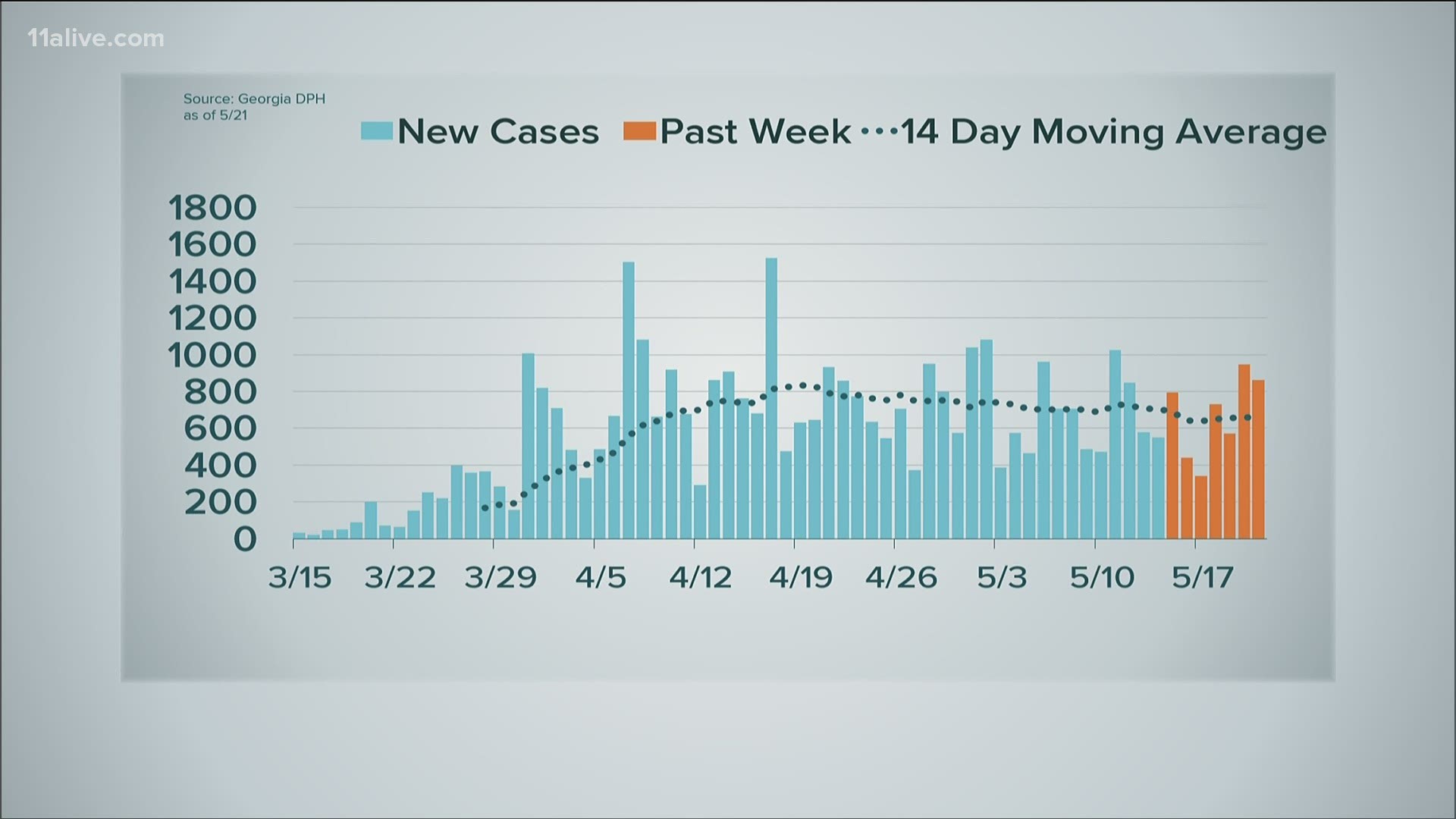 ATLANTA — One of the coronavirus statistics Gov. Brian Kemp has highlighted on numerous occasions as a sign things are improving in Georgia is active hospitalizations.

He tweeted on Tuesday when the number dipped below 1,000 to 986, a 34% drop since May 1. Again on Friday, his office sent out a release that the number of hospitalized COVID-19 patients in Georgia was at a new low, 887 - a 40% drop since the beginning of the month.

That overall falling trend is now, however, at odds with the rate of new patients being hospitalized.

State data from this month show that new hospitalizations are noticeably rising.

Based on the state's tally taken at 8 p.m. each night, in the eight days between May 14 and May 22 (we don't yet have complete data for today, May 23) the 7-day moving average rose from almost 59 to nearly 114 on Wednesday, before dipping back to 87 yesterday.

It's important to note things are still fairly well below where they were at a peak in the middle of last month:

But, as the graph shows, the consistent downward trend in new hospitalizations Georgia saw from the end of April until the middle of this month has been distinctly reversed, at least for now.

It's also important not to oversell the trend - as the bars in the graphs also show, a single large day can have an outsize impact on the 7-day average. Still, the 14-day average, which will soften a single day's influence, also shows a less pronounced, though noticeable, rise.

With cases, counts can rise or fall simply by how much you test - and even controlling for that, by looking at percent of positive tests for instance, can wind up misleading based on the profile of people getting tested or where more tests are being done. And yet still, the number of new cases you see today might come from any number of points in the last few weeks, given that it's generally unpredictable when a person's test might finally get processed.

Similarly, with deaths, the lag between the newest numbers you see today and when the person actually got sick can have a large disconnect - some people endure a long fight through the illness, maybe even as long as a month, while others do not.

But, critically, with hospitalizations you can get a more concrete sense of where things stand - the incubation period (the time between when you get infected and when you start to get sick) is only about 4-5 days, and that number itself is less subject to obscuring influences. If a person gets sick enough, they go to the hospital, and if more people are getting sicker, we see new patient numbers rise, right now - it's fairly straightforward.

As it stands now in Georgia, the low total active hospitalization figure tells us more people are still leaving the hospital (or, it's difficult to note, dying) than coming in.

But at the moment the rate of new people coming in is rising.

2 million have recovered from COVID-19 around the world