One registered nurse and veteran expert told 11Alive burnout amongst nurses is the worst he has seen in his 35-year career. 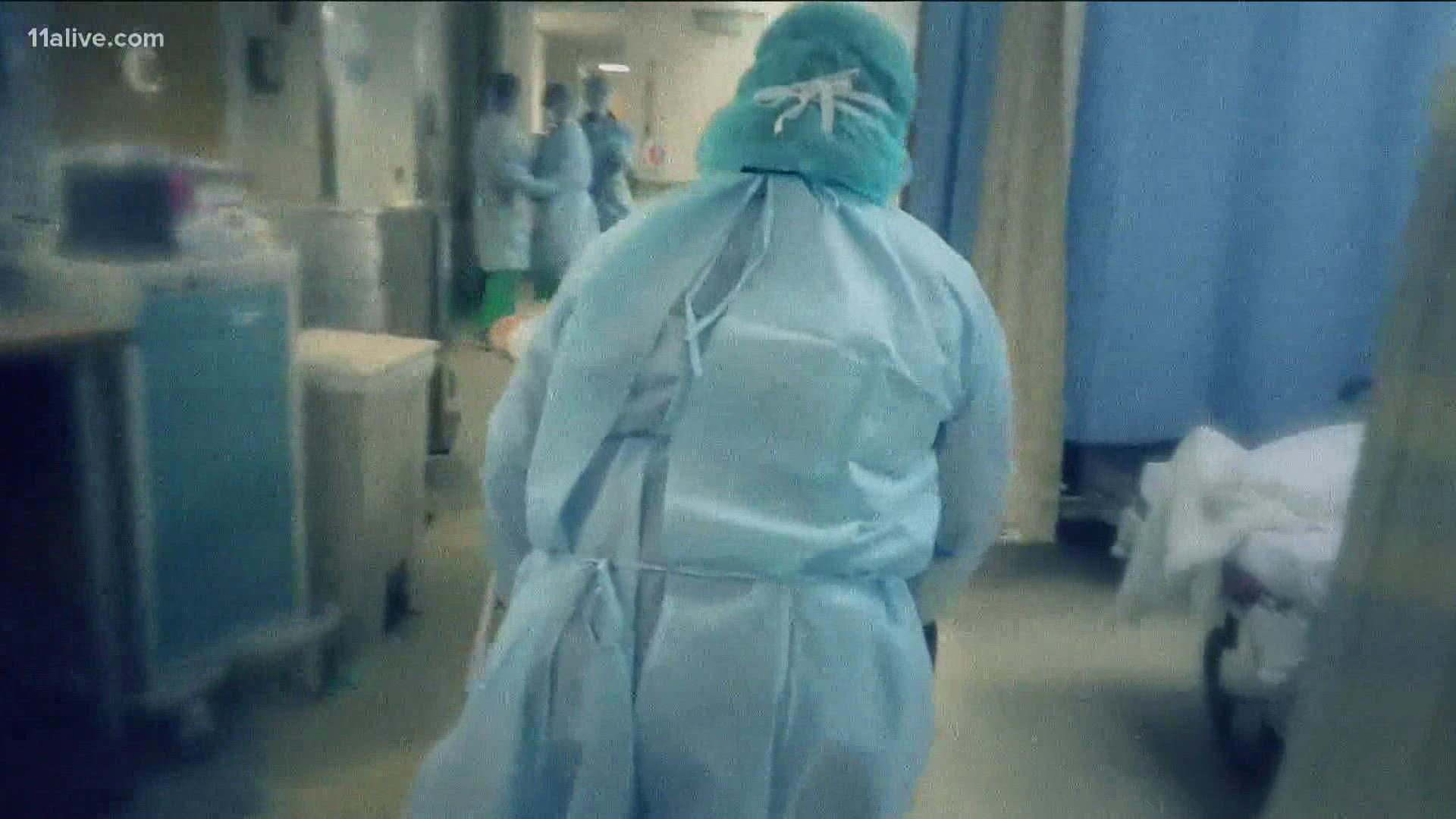 ATLANTA — A statewide and even a nationwide nursing shortage existed before the COVID-19 pandemic. As the pandemic continued the situation has only worsened.

"The burnout, it is the worst I've seen it in over 35 years when it comes to nursing. We are just tired," said Richard Lamphier, a registered nurse and president of the Georgia Nurses Association.

The nursing shortage could lead to a delay during a doctor visit or an elective surgery could get pushed back, Lamphier said.

The American Association of Colleges of Nursing previously found a nursing shortage existed for a few reasons. Some of those causes included a lack of nursing school students and teachers to meet industry demands, over half of registered nurses were over the age of 50 (meaning many were set to retire in the near future) or an aging U.S. population increased healthcare demands.

Now, COVID is adding to the problem.

"It is a very critical shortage. I think if you talk to most employers they would say this is one of their top the concerns," Pat Horton, the CEO of the nonprofit Georgia Center for Nursing Excellence. The organization tracks staffing trends in the nursing industry and works to address workforce challenges.

Horton added the issue is impacting the entire state.

"We divided the state up into six regions and all six regions are challenged with the nursing shortage," Horton said. "Whether it is a clinic, a hospital, long term care facility, public health, school nursing they all are being impacted."

Travel and resident nurses who spoke to 11Alive Thursday said that if hospitals decide to mandate vaccines, it'll only drive the number of workers needed in the industry higher.

"I really honestly feel as though it shouldn't be forced on me now as a nurse," said travel nurse Shy Warren. "I know a lot of people are so against us nurses not wanting to get the vaccine. But we have also done our research."

A six-year resident nurse in Georgia, who wanted to remain anonymous, echoed that sentiment.

"They’re gonna see a lot of the nurses leaving, they're gonna leave the profession bedside, and start doing other things," she said. "Why are you trying to force me - you didn't force me last year and I was an asset. So why am I not an asset this year? I don't think it's right at all.”

A Washington Post and Kaiser Family Foundation poll found that 1 in 3 healthcare workers have thought of leaving the profession, while 1 in 6 said the pandemic is burning them out.

"It breaks my heart to see a lot of my co workers leaving," the anonymous nurse said. "They're actually leaving. They're taking agency jobs, the agencies are paying so much money now. And if the hospitals don't catch up to what these agencies are paying, the nurses are gonna leave.”

“I know that some floors in the hospitals are being closed because there isn't enough staff to cover those floors," added Warren.

Another challenge healthcare providers are facing is not only filling open positions, but also filling them with experienced nurses as a wave of veterans are retiring or switching careers.

"It may not be fulltime, but can we retain the nurses to work one shift a week, or two shifts a week, to help with the new nurses coming into the field and really share the experience with them," Lamphier said.

"I've never seen anything like this. I have friends who work in urgent care and usually at this time of the year, they see 30 patients a day now they're seeing 130 and one nurse practitioner running an urgent care that's next to impossible to do," she said.

The non-profit is working on legislative efforts to address the shortage. It is also hosting a summit in late October with the hopes of getting healthcare students and professionals excited about the medical field.

"You have bedside nurses and in ERs that, who are doing everything they can do, but there are still 60 people in the waiting room, all coughing in each other's faces and waiting for 10 hours. In our outreach hospitals in more rural areas of of Georgia that's never been heard of. So it's been quite a culture shock.”

Blackmon added that not only are nurses experiencing burnout because of the shortage, but also because they are seeing more deaths now than previously in the pandemic.

Horton said keeping experienced nurses on the job needs to be a priority, along with finding the next generation of nurses. She said developing future nurses is also a challenge because of issues on the academic level.

"We also have the challenge with our nursing faculty," Horton said. "Many of them are at a point of retirement and because nurses can make more in a clinical setting than they can as a nursing faculty member, it is much more difficult to retain faculty and to recruit faculty in order for us to expand our growth as far as bringing in more nursing students."

While individual hospitals the state and several organizations are working to address the nursing shortage in a piecemeal fashion, Lamphier said the best solution toward ending the shortage is first getting the pandemic under control.

"We really need to get the public vaccinated to help out with the Delta variant. If we can do that, I think we can slow this fourth wave considerably and then we can rebuild the nursing staff in the hospitals and public health nurses, clinic nurses, nurses across the board, school nurses," Lamphier said.