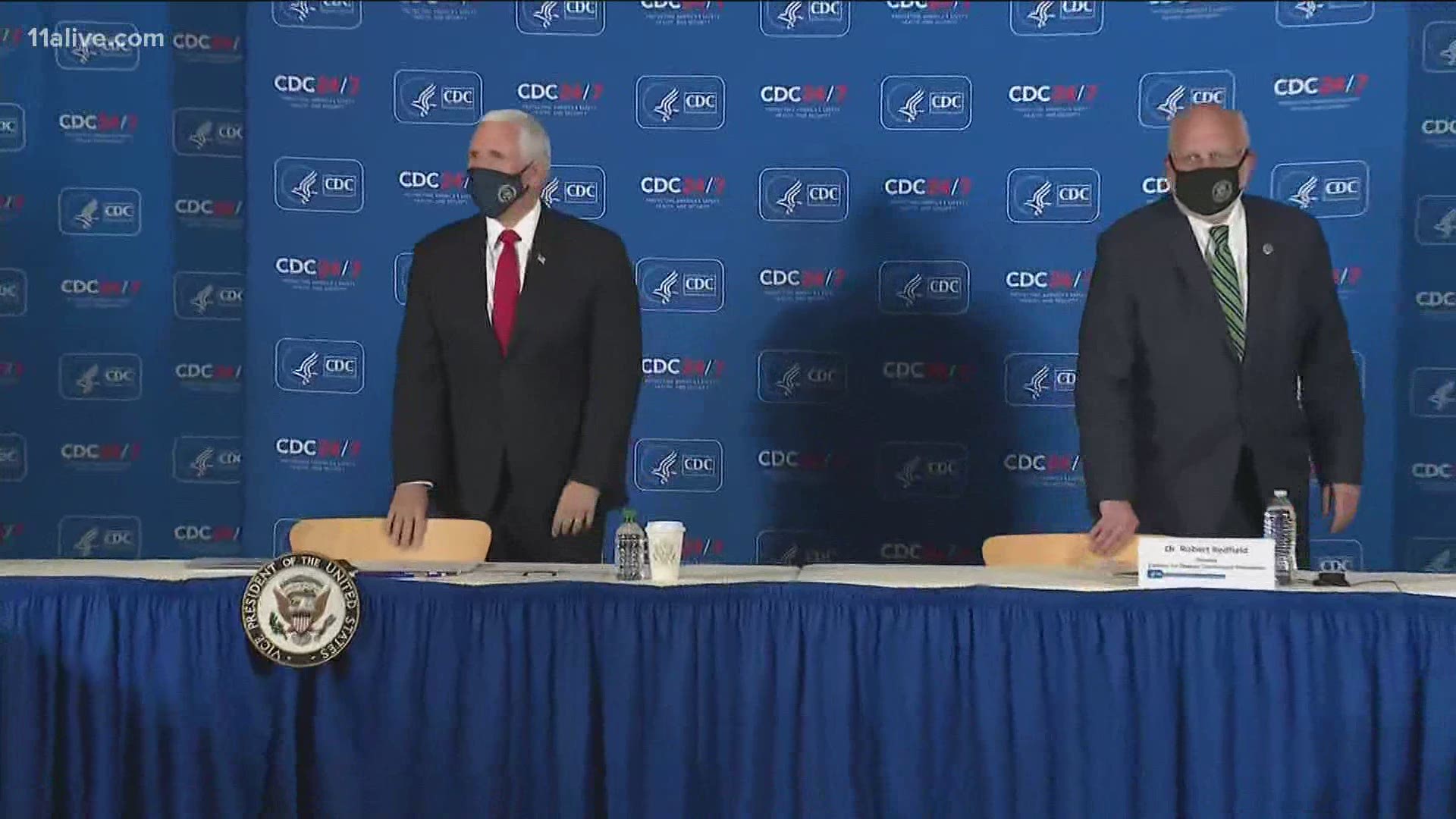 ATLANTA — Vice President Mike Pence was at the Atlanta-based Centers for Disease Control and Prevention Friday, predicting that Americans could conceivably start getting vaccinated for COVID-19 as soon as December 16.

The vice president’s visit to Atlanta’s CDC campus came as many CDC boosters are looking forward to the departure of the Trump administration in January.

Protesters geared up to meet the vice president’s motorcade outside the CDC’s main gate.

Since March, the administration often stressed maintaining the economy more than it was willing to mandate restrictions to contain the pandemic.

It also moved much of the health-related decision-making from the Atlanta-based agency to the White House.

The administration’s critics say that approach has cost lives.

"It’s not reversible," said one protester, Tee Stearn. "The question going forward – are we going to be able to mitigate some of that? Let’s hope so."

The Trump administration has stressed the development of a vaccine – which was the focus of Pence’s visit.

Officials said they expect the inoculation of long-term care residents and health care workers to start shortly after FDA approval, "which we think is likely around the 14th of December," Pence said during a roundtable with CDC officials.

"We could be shipping within the first 24 hours (of FDA approval) and vaccinating within 24 hours of that," Pence said.

He predicted it would happen that quickly in all 50 states.

At the same time, they stressed that social distancing, masks and other health precautions will need to continue into the spring before the pandemic is past – saying it will be months before most Americans can get vaccinated.

Wider distribution of a vaccine will coincide with the transition to the Biden administration in January.

With that transition, backers of the CDC are hopeful that the agency can regain some of its lost morale – and again recruit top health care workers.

"I think the future looks bright. I think things are going to improve," said Carlton Duncan, a 35-year CDC employee.  "We’re going to be able to move in the right direction and rebuild CDC. I think the incoming administration clearly understands what has happened and what needs to be done."

Duncan said he expects the CDC to stress greater ethnic diversity when it starts re-filling positions that were lost as scientists left the agency over the last four years.