In Georgia, the percentages of Blacks and Hispanics who have received at least one dose lag far behind Asians and Whites. 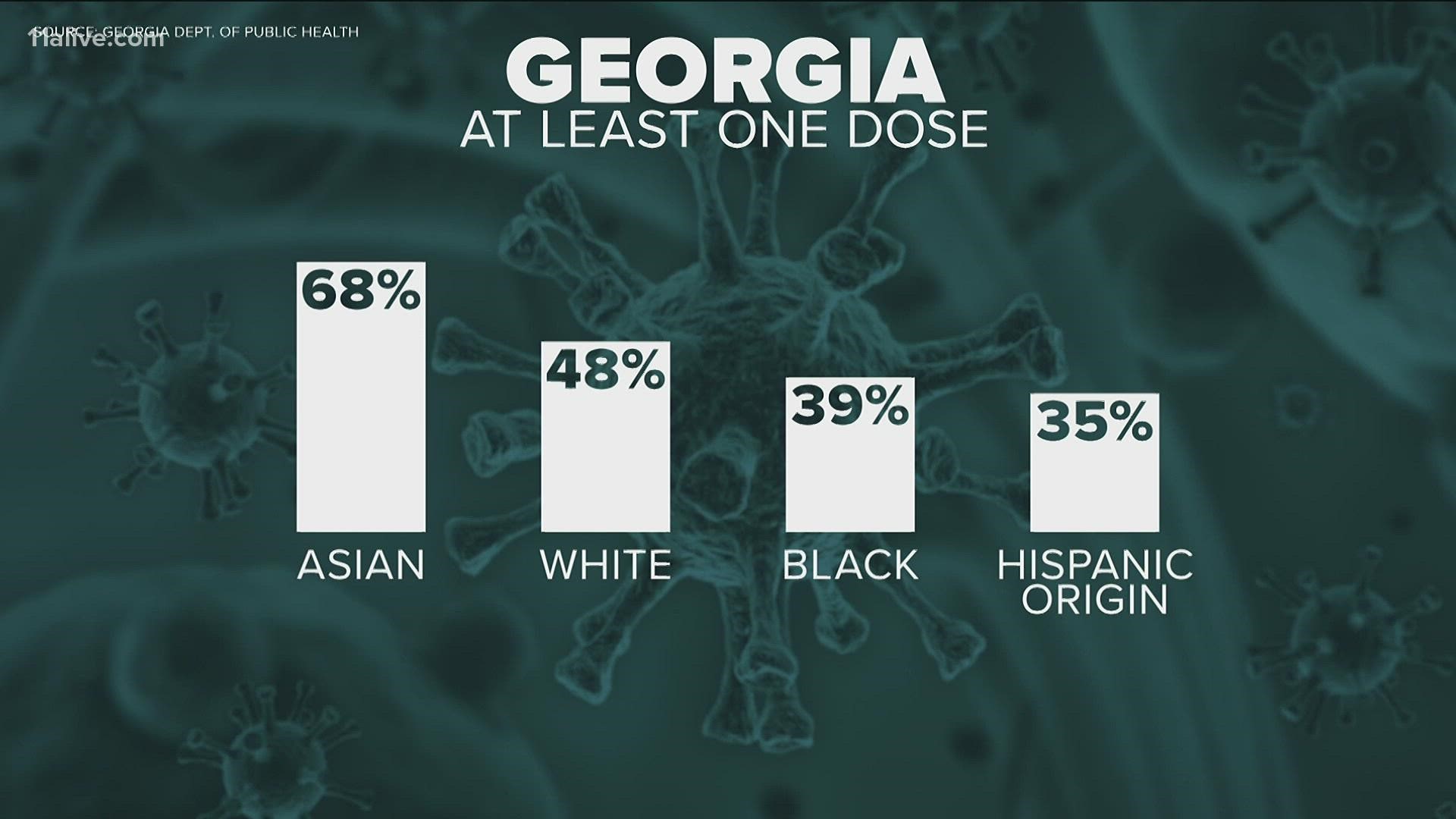 ATLANTA — For many vaccine supporters and providers, Monday’s FDA approval of the Pfizer vaccine for those 16 and older was another “day of hope,” like the December day when the first shipments arrived in Georgia.

They expect that more people who have resisted getting the shots will finally get them, now -- including in minority communities.

Atlanta physician Frita Fisher, M.D. believes the FDA approval will convince at least some of the unvaccinated that the vaccine is safe.

“I was ecstatic when I found out that the FDA granted full approval for the Pfizer vaccine” for ages 16 and older, she said. “There are so many people who said that they wanted to wait and see, because we have not had full approval. I have encountered that sector who says, ‘Ahh, I don’t want this drug if it’s experimental, I’m not going to put an experiment in my body.’”

“Dr. Frita,” as she is known to her patients and on her DrFrita.com website, has been working for months in African American communities, in particular, to encourage more Blacks to get vaccinated.

She said that on Monday she started hearing from people telling her that they are ready to do so because of the FDA approval.

“Even though I don’t think it’s a huge part of the population, I do believe it will make a difference in some.”

Three in ten unvaccinated adults in the U.S. said in June that they would be more likely to get the shots, if a vaccine were fully approved, according to the Kaiser Family Foundation.

“And honestly,” Dr. Frita said, “(getting vaccinated) is our only way out of this pandemic.”

She also expects that more public and private employers will begin to mandate Pfizer vaccinations for their employees.

“Now that there’s full approval, it gives people even more confidence that the science is being backed up and that they can safely mandate this life-saving vaccination.”

As it is, in Georgia the percentages of Blacks and Hispanics who have received at least one shot lag behind Asians and Whites, according to the Georgia Department of Public Health.

Here's a breakdown of the numbers for at least one dose:

“For some of them, you know the FDA just removed any reason to wait,” said Gigi Pedraza, the Executive Director of the Latino Community Fund Georgia, in Atlanta. “They were not resistant, they were not against the vaccines, they were just waiting to ensure that what they were going to do was going to be safe, for themselves, for their family, for their children.”

On Monday, Pedraza posted notices on social media and other platforms, in Spanish and English, trying to get the word out that the FDA just granted full approval of the Pfizer vaccine for those 16 and older.

But she said the Delta variant had already worried many people as never before. So, she started seeing an uptick three weeks ago in many of the Spanish speaking communities that LCF Georgia serves. More people changed their minds and decided they want the vaccines right away.

“For those people who have waited this long and who now, at this moment, changed and get the vaccination due to FDA approval, these same people may be able to more easily convince the rest of the population to get vaccinated," Dr. Frita said.