'Porter was the most humbling person you'd ever meet,' a family member said. 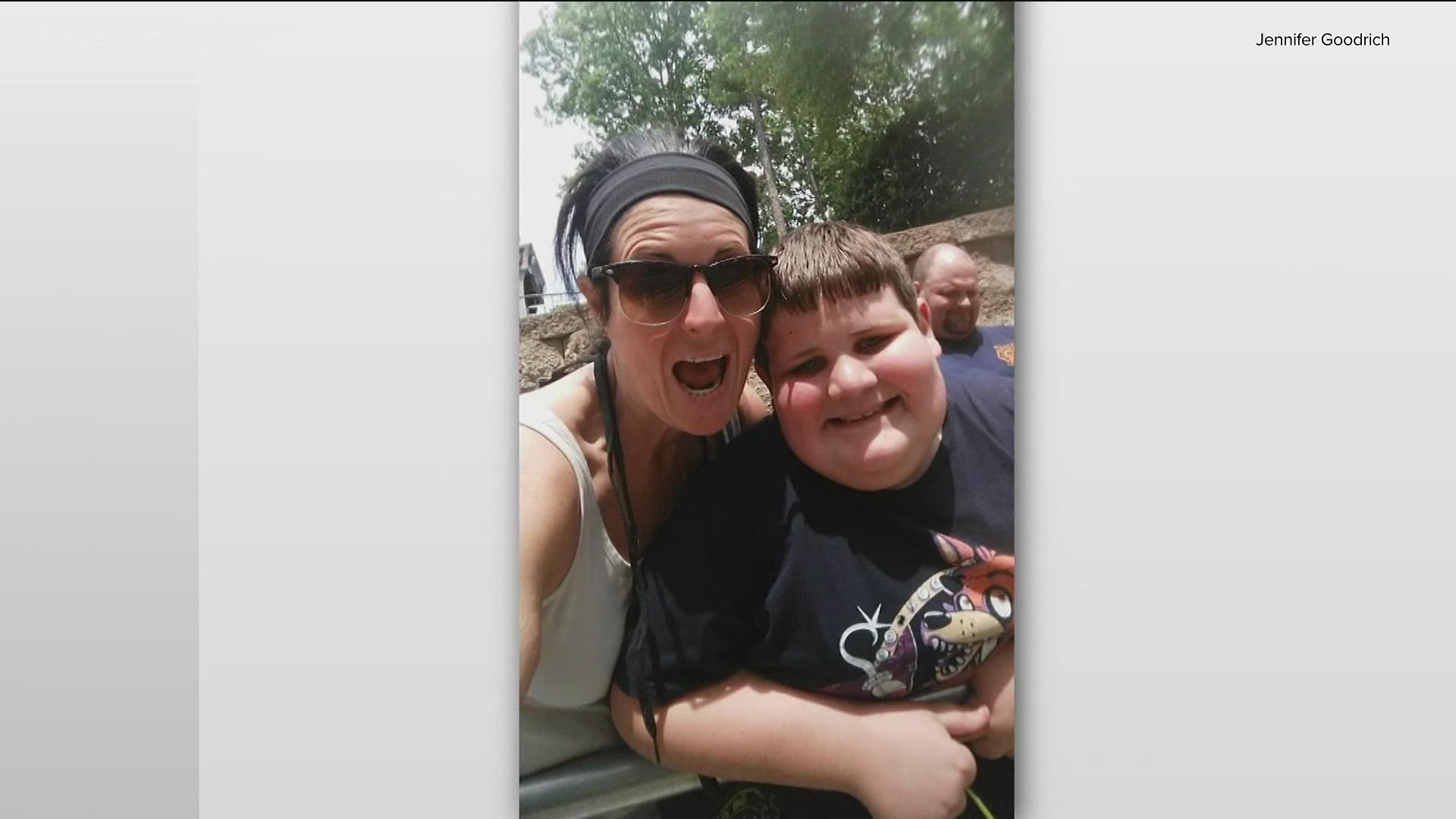 FLOYD COUNTY, Ga. — A family is mourning the death of a 13-year-old who contracted COVID-19.

Porter Alexander Helms's mother, Jennifer Goodrich, said her son was the love of her life. She now calls him her sweet angel. The young teen tested positive for the virus one week ago and died Tuesday morning, according to Floyd County coroner Harold "Gene" Proctor.

Below are some tributes Porter's family shared with 11Alive.

"Porter was an absolutely wonderful and amazing kiddo. He always made you laugh and smile with his quirky antics. He was the love of my life. God, I'm going to miss that angel. I don't know what I'm going to do without him. He is my baby."

His older sister, Karlee, is asking for prayers and privacy as the family mourns Porter's death.

"He was just so young and full of life. We are absolutely devastated."

"Porter was the most humbling person you'd ever meet. He'd make you laugh until you cry. I'm sure going to miss the times we laughed together and telling jokes. His smile would light up a room that's for sure."

Coroner Harold Proctor said Porter was pronounced dead just before 6 a.m. He said the boy was coughing and had some trouble breathing around 3 a.m., so his dad gave him some more medicine.

Just two hours later, Porter's father went to check on him after noticing it got quiet. That's when he reportedly found his son "blue."  The teen had stopped breathing.

"His face was blue, his hands were blue and he was not breathing at that time," the coroner said.

This is Porter Helms. His mother tells me he was the love of her life. She now calls him her sweet angel.
Floyd County coroner says Porter is the first child under the age of 18 to die from COVID-19 in the county. #11Alive https://t.co/1Ep1CTznoC pic.twitter.com/VqHElIMlG2

According to Proctor, the emergency room called the coroner's office to investigate. After examining Porter, his medical records, and interviewing the family, Proctor said the investigation revealed the 13-year-old never recovered after testing positive for the virus.

"This young man had no prior medical problems, no medical history at all... he basically succumbed to the illness," he added.

His cause of death is listed as "respiratory failure due to COVID-19," according to Proctor. There is no indication of his vaccination status at this time.

Floyd County Schools confirmed Porter was a student enrolled with the district at Coosa High School. Parents tell11Alive masks were not required in the school until this week.

In a statement issued on Tuesday afternoon, the school system called his death "a tragedy."

"We extend our deepest sympathy to this child’s family and all others who have lost a loved one to this virus," the school district wrote.

Here's the full statement from the school district:

"The loss of a child, at any time, under any circumstances, is a tragedy. We are heartbroken that COVID-19 has taken the life of a child. We extend our deepest sympathy to this child’s family and all others who have lost a loved one to this virus. Because we know this will impact our school community emotionally, we encourage parents to be emotionally sensitive and prepare to offer support to their child or children during this difficult time."

According to the Georgia Department of Public Health, there have been 12 COVID-related deaths in Georgia for children between 1 and 17 years old. Proctor said Porter is the first child under the age of 18 to die from COVID in the county.

In Georgia, cases among school-aged kids 5 to 17 years old are up nearly 60% in the last six months.

"We've seen the highest number of weekly outbreaks since the pandemic began... with more than half of these outbreaks in K through 12 schools," Dr. Toomey announced during a Monday's press conference.

Porter's family is asking for prayers and privacy as they mourn the life of the teenager they say was so young, full of life, and could make you laugh until you cry.

There's a meal train and fundraiser set up. To donate, click here.