COVID cases, deaths in nursing homes down by more than 90% after vaccine rollout: Report

The new report released Tuesday shows that nursing homes have seen a 96% decline in new COVID cases among residents since vaccine administration began in December. 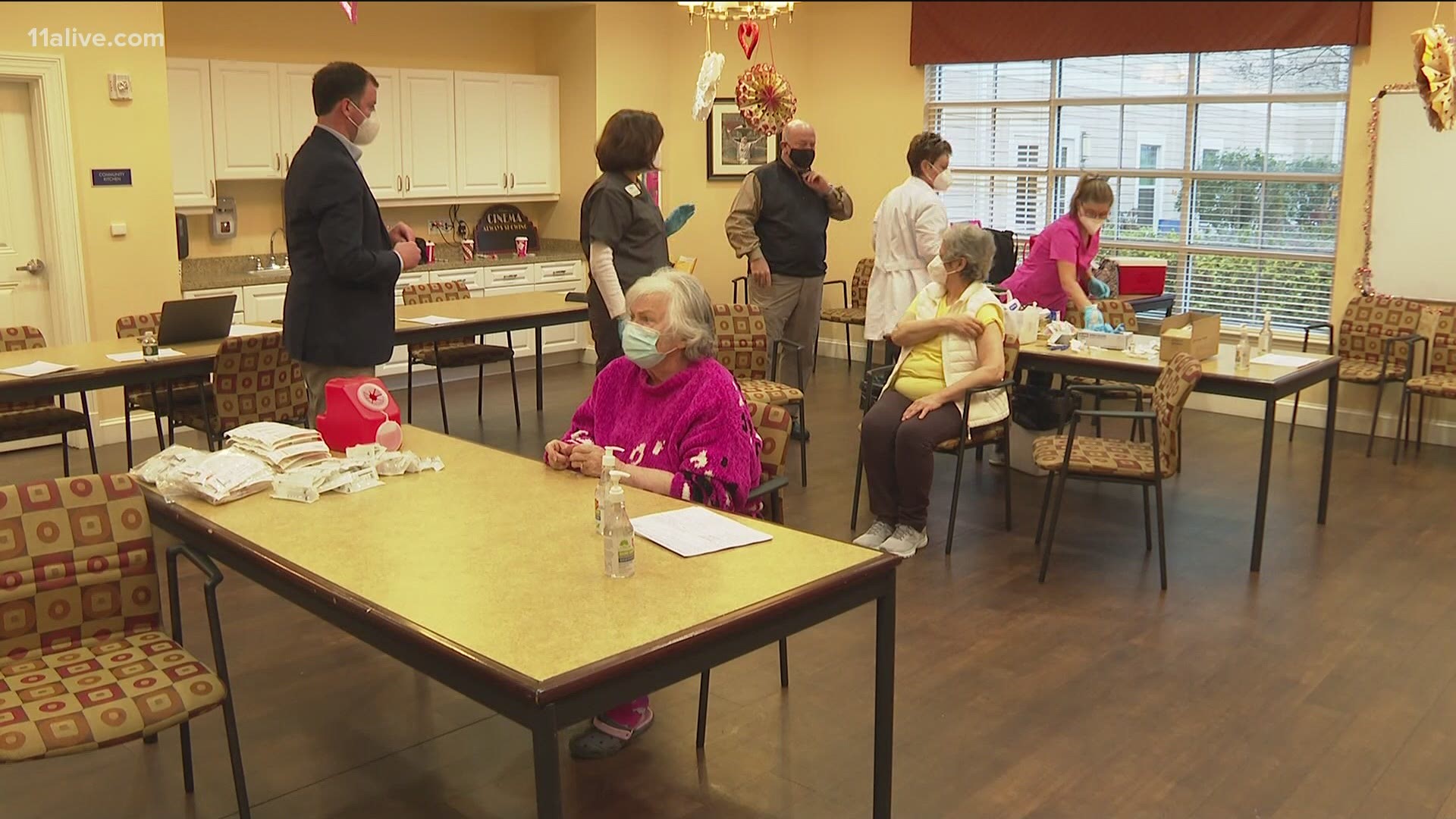 ATLANTA — A new report released by the American Health Care Association (AHCA) and National Center for Assisted Living (NCAL), shows that COVID-19 cases and deaths in nursing homes across the country have decreased by more than 90%.

The two organizations represent more than 14,000 nursing homes and long-term care facilities across the country, providing care to about 5 million people each year.

The report released Tuesday shows that nursing homes in the U.S. have been seeing a rapid decline in new cases, crediting vaccine allocations that were prioritized for nursing homes.

The report, which uses Centers for Medicare & Medicaid Services (CMS) data from May 2020 through March 2021, shows that nursing homes have seen a 96% decline in new COVID-19 cases among residents since vaccine administration began in December.

The report also shows that COVID-related deaths in nursing homes have declined by 91% since Dec. 20.

That's similar to what is being seen in the state. Georgia is seeing a very slow but steady decline in positive cases since vaccines started being administered in late December.

According to data from the state, being tracked by 11Alive's COVID Number's Team, in May 2020, positive residents in the state accounted for about 13% of all total cases in Georgia. Right before vaccines were administered, that number was about 4% and its since gone down to 3%.

There has been the same slight decline with staff, but they remain more steady. In May 2020, staff accounted for about 5 to 6% of total COVID-19 cases in Georgia. Right before vaccines were distributed, staff were at 2%.

By Dec. 31, cases were still at 2%, and stayed the same through February.

The senior living communities at Sterling Estates (East Cobb and West Cobb location) as well as Azalea Estates in Fayetteville, have seen that dip, too.

They offer independent living as well as assisted and memory care. Nathan Madigan is the Vice President of Operations at the three facilities. One year ago, they were dealing with an outbreak in their East Cobb facility.

"We had an early struggle with the virus and had to learn a ton at that community," he recalled. "We worked with Georgia [Department of Public Health], the National Guard, the state healthcare associated infection team to put together policies and procedures to ensure we had the right equipment, cleaning supplies."

He gave credit to the vaccines for finally being able to see these dips in number of cases and deaths.

Madigan said more than 96% of the population in the facilities have been vaccinated.

"That's a testament to the effectiveness of the vaccine as well as our policies in place that continue to this day to keep people safe," Madigan said.

RELATED: Here is who is now eligible to get a COVID-19 vaccine in Georgia

He added that they were the only senior living community in the state that actually directly supplied the vaccine. Their first round of vaccinations took place in Christmas Eve of 2020.

"We were the first senior living community to be fully vaccinated by the end of January. We had our second doses there in January," he added. "Having access to the vaccine early was the biggest thing in the end that we could do. We knew that's what was going to move the needle for our residents and our staff."

He said since then, they've had zero cases of COVID-19 in their buildings.

"We truly do feel like it's a new day," he said. "We see that in the faces of our residents and their loved ones."

Nursing home A.G. Rhodes also credits the vaccine for their dip in trends.

A spokesperson wrote to 11Alive saying:

"We are trending down, and we are encouraged by that and optimistic that the vaccine is working. A.G. Rhodes has a history of recognizing and incentivizing our staff and so we’ve promoted a culture where staff know we are going to take care of them. We really can’t attribute incentives to staff making the decision to get the vaccine, but what we are seeing is that as more time goes on, staff are saying they are more comfortable with getting the vaccine."