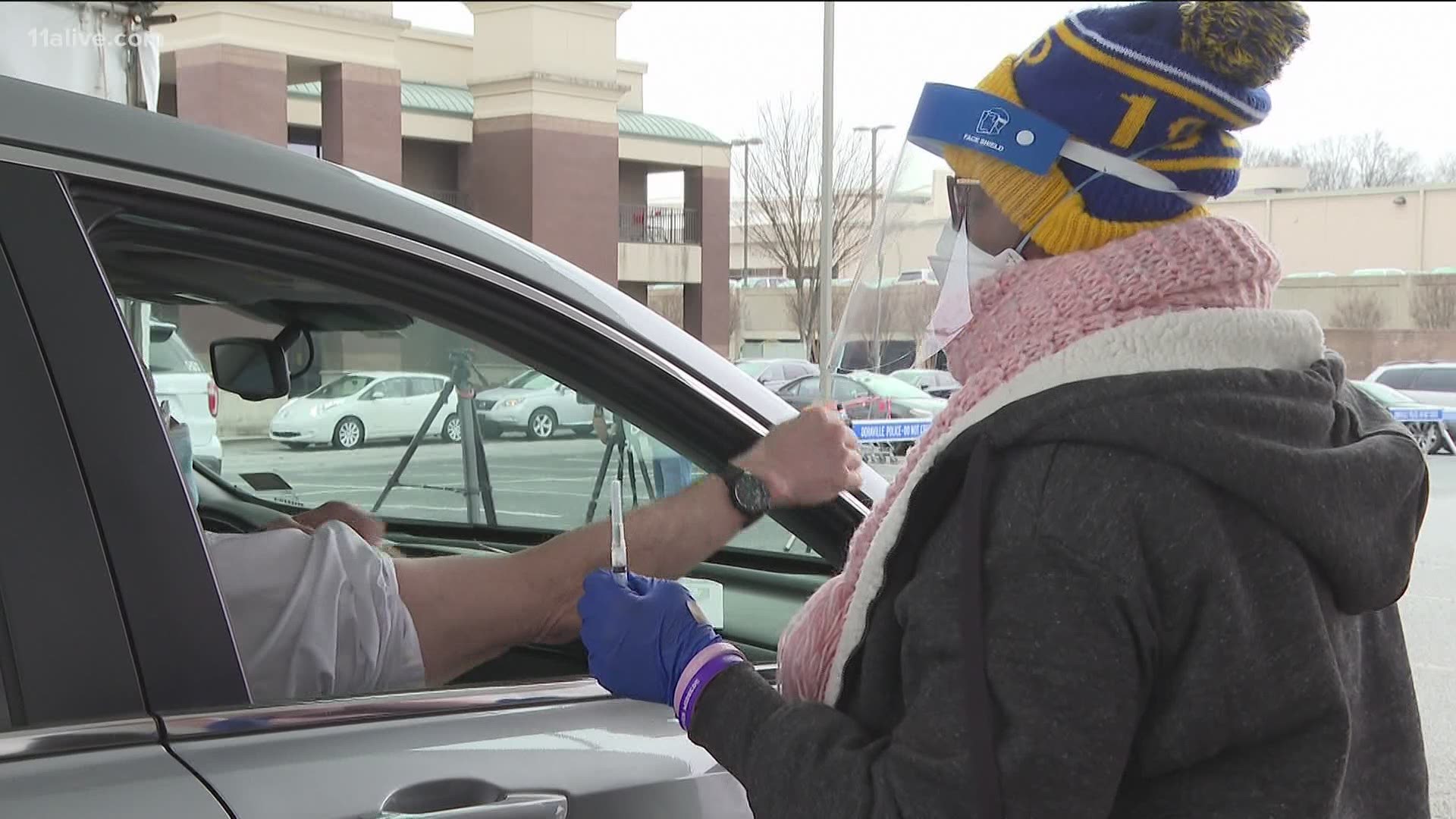 ATLANTA — By now, you probably know there are nationwide issues with the vaccine rollout. In Georgia, websites crashed, phone systems are overwhelmed according to the Department of Health, and COVID cases continue to increase.

The American Hospital Association has estimated that 1.8 million people need to be vaccinated daily from now until May to reach widespread immunity.

There are three major problems experts have identified with the rollout and three possible solutions.

Problem one: Lack of a federal plan

The federal government is releasing the vaccine to states. According to a tracker of the Centers for Disease Control and Prevention website, 25 million doses have been distributed to states so far. But, at the time of this article, barely 9 million people received their first dose. How vaccine distribution would be handled was left up to each state, forcing local and state health officials to figure out their own vaccine plan regarding who would get it and how.

Senate Democrats sent a letter on Monday to the Trump administration demanding it makes changes to the rollout strategy.

“A vaccine allocated on a spreadsheet, or even a vaccine distributed and sitting on a self, is not enough to protect anyone,” lawmakers wrote.

Possible solution? A federal plan to help states with the distribution

In their letter, Democrat senators wrote the Trump administration should issue a comprehensive national plan. This could include support for states and health officials on what is needed to administer shots.

“I think local public health is doing the best it can with resources they have. Candidly, it’s not enough,” said Dr. Harry Heiman with Georgia State University’s School of Public Health.

According to the Associated Press, health officials worried they wouldn’t have the money, and therefore the tools and staff to effectively distribute the vaccine.

Heiman agreed, “Historically, we’ve underinvested in public health but across this pandemic, we as a state haven’t brought the needed resources to match the need.”

To properly distribute a vaccine, doses need to be properly stored, tracked, and appointments scheduled. To do that, proper staff and funds are needed.

Heiman said, “{The} State of Georgia sits on an over two billion rainy day fund. If there’s ever a time we needed to tap that rainy-day fund to ensure the security of people in our state, now would be the time.”

Lawmakers already dipped into the fund last year to make ends meets. But, Governor Brian Kemp is set to release his budget proposal soon, giving a better picture of how much money can or needs to be spent on the vaccine plan.

The American Hospital Association, which represents nearly 5,000 hospitals and health systems in the U.S., sent a letter to the Trump administration, asking for more federal dollars to help with the vaccine distribution.

Senate Democrats also asked that a federal plan from the Trump administration, include how the government will support health officials with funding.

If all of this sounds familiar, that’s because it is. At the beginning of the pandemic, states faced issues with websites, long lines, confusion, contact tracing, and getting PPE equipment to medical staff.

Now, it seems it’s like the record is on repeat.

But, when states like Georgia expanded testing sites, it helped ease the pressure of getting people in and out faster.

Currently, states continue to struggle to get people their first dose, much less complete the vaccination process. The Trump administration is withholding about half of the available doses to ensure there’s enough available for the required second shots.

Pfizer board member Dr. Scott Gottlieb said withholding may not be the answer and stockpiled medication should be distributed nationwide to get more people their first shot

"I think we can be pushing out more vaccine right now given the fact this is the most critical part of the epidemic and take a little bit of risk that there could be a delay in the second dose,” he told NBC News.

Some cities are having success with mass vaccination sites, like Oregon and New Jersey. San Diego recently turned a tailgate parking lot into a vaccination headquarters, hoping to get at least five thousand people inoculated per day.

"They will drive in, they will roll down their windows, a nurse will come and give them the vaccination, an observer will watch them for 15 minutes to make sure that there is no reaction,” said Patty Maysent, CEO of UC San Diego Health.

The letter from lawmakers also stated the government should look at “providing increased support for mass vaccination clinics and mobile testing units.”

The Georgia Department of Public Health told 11Alive it is currently in discussions to create “a centralized system for vaccination and/or mass vaccination sites to provide additional access to vaccine, as vaccine supplies allow.”