'To put somebody out during a pandemic, that's ridiculous' | Group protests conditions, evictions at complex

Residents said they are upset with evictions and living conditions at a DeKalb County complex. 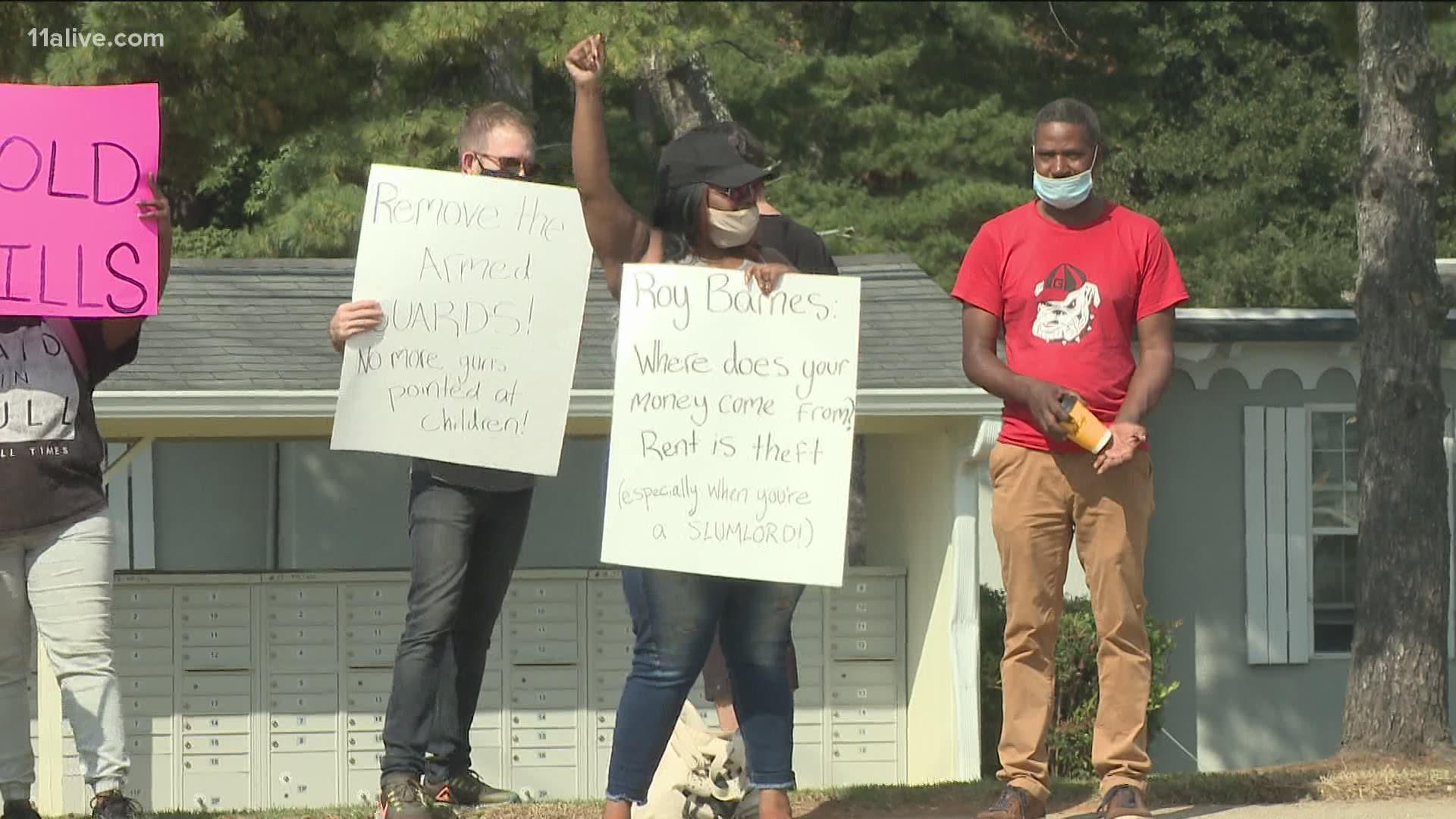 "It is not properly maintained, it is not efficient, it is not safe, they have found three or more people here dead," said Karen Williams as she pulled onto Flat Shoals Road from the Efficiency Lodge in DeKalb County.

Williams was one of honked her horn in support of the group that was gathered across the street to rally and protest against evictions and living conditions at the complex.

11Alive spoke to Valerie Hurston, whose sister lives at the complex with her six children about the evictions.

"To put somebody out during a pandemic -- that's ridiculous," said Hurston.

Hurston shared pictures with 11Alive News of what she called "unlivable" conditions at the complex.

"The plumbing is always stopped up, the sink -- it's just ridiculous," she said, referring to the photos. "There's no carpet on the floor, for the A/C you have to have a bowl for the leak. This place is filthy."

Atlanta Legal Aid attorney John Gainey said a landlord's obligation to make repairs to a property is completely independent of a tenant's ability to pay rent.

"They're subjecting themselves to lawsuits down the road if they don't do that (make repairs) in a timely manner," said Gainey.

While the Coronavirus Aid, Relief, and Economic Security Act -- or CARES Act -- moratorium on tenant evictions has expired, Gainey said another protection for renters is now in place.

Under a CDC order dated September 4, residential evictions for most tenants due to non-payment could be paused until December 31.

"That doesn't mean that rent is not accruing, they'll (renters) have to pay rent for every month they're occupying the premises," Gainey said. "It's just getting pushed back."

Even if an eviction proceeding is already underway, Gainey said that tenants can still protect themselves.

Renters will need to fill out a Home Renter Declaration form, available from the CDC, and submit it to their landlord and the courts.

Gainey added that there are technical requirements that tenants must meet in order to be protected.

According to the CDC, tenants must declare they are:

In addition, according to the CDC form, tenants must indicate that they understand that:

"We are in America, there's no reason for anyone to be homeless -- especially children," said Hurston.

Another man at the rally, Travis White, said he was evicted on Sept. 8. White said he had lived there for a year and a half before his eviction and had also worked in maintenance there.

"We're not standing by to be illegally evicted, not stand to have our money taken, and not allow people to run a business with black mold crawling through the walls killing people," said White.

White was upset that when he was evicted, law enforcement was on hand to make sure that he left the premises. He said that it all happened quickly.

He was asked about sympathy for the landlords or property owners, who have their own bills to pay.

11Alive News reached out to the owners of the Efficiency Lodge, but so far, we have not received a response.