It's unclear whether any family member of the Atlanta Fire Department actually did, in fact, receive a vaccine, or even sought one out. 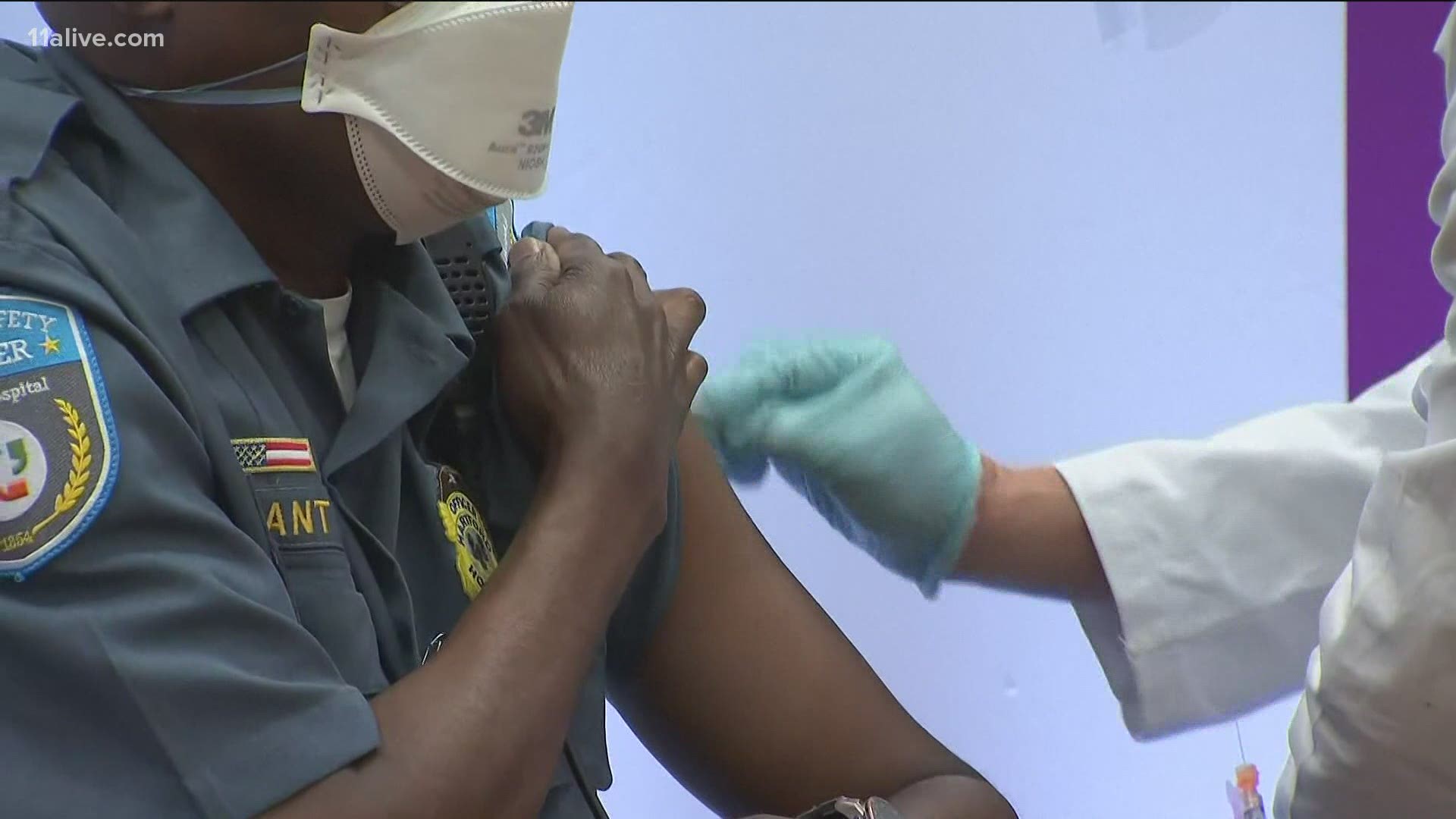 ATLANTA — The Atlanta mayor's office is calling a memo that appeared to suggest family members of the Atlanta Fire Rescue department were newly eligible for the COVID vaccine, though they were not, a "miscommunication."

Currently, Georgia is in the 1A+ phase of vaccine distribution, and only those who qualify - those over 65 years old and their caregivers, first responders, and healthcare provides - are eligible to receive the vaccine. Family members of those in those groups - including firefighters - would not be able to receive the vaccine, unless they are, themselves, are eligible under the current phase.

It's unclear whether any family member of the Atlanta Fire Department actually did, in fact, receive a vaccine, or even sought one out.

11Alive asked both the city and the fire department for a comment on the situation. A city spokesman offered a statement only to comment that the memo was a "miscommunication" and that the city is "looking into the facts surrounding the matter," adding that the "vaccination process for our public safety officials has been smooth and successful."

"Our firefighters have vaccinated well over 1,000 people within Fulton County in support of the Board of Health’s efforts," the statement said. "To the best of our knowledge, no qualifying public safety official who has requested a vaccine has been denied."

When contacted about 11Alive's questions into whether the family members were authorized to receive the vaccine, the fire department referred us back to the mayor's office.

This is not the first time that questions have been raised about people receiving the vaccine outside of their eligibility. Late last month, a medical facility in Elbert County, in east Georgia, was suspended from the state's vaccine program after the Department of Public Health discovered that the facility was vaccinating teachers, even though some of them were not eligible to receive them under the 1A+ vaccine phase.

The Department of Public Health was also looking into another facility in Floyd County after more than 760 non-employee family members, some of whom may not have been eligible for the vaccine, received one. At the time, a spokesman for Floyd Medical Center said they were facing a "historically high" number of COVID hospitalizations and felt it was "one more way we could help keep our employees healthy."

The examples have become a question of ethics for some. If the end goal is to get as many people vaccinated as possible, why are some being punished for doing so?

“I think the important thing to remember here is that there is no perfect way to distribute a scarce vaccine," said Paul Wolpe.

He's the director of the center for Ethics for Emory University. He said a lack of a national plan from the get-go left local and state health professionals stuck making tough decisions.

And even though there’s recommendations for who gets the vaccine first - there are challenging situations.

"Do I throw away a good vaccine that can protect people from a disease that can be deadly? Or do I give it to whoever I can find before it expires?” he posed.

But what about people who seek out the vaccine when it’s not their turn?

The Department of Public Health and Gov. Brian Kemp have maintained vaccines are in short supply, and they must get them to those most at risk right now.

But just like everything with COVID, Wople said how we handle who gets the vaccine and when will be closely studied in the future.

“I'm hoping that we learn the lessons of COVID and come out of this with a fairer system," he said.