Behind the scenes at the Mercedes-Benz Stadium mass vaccination site 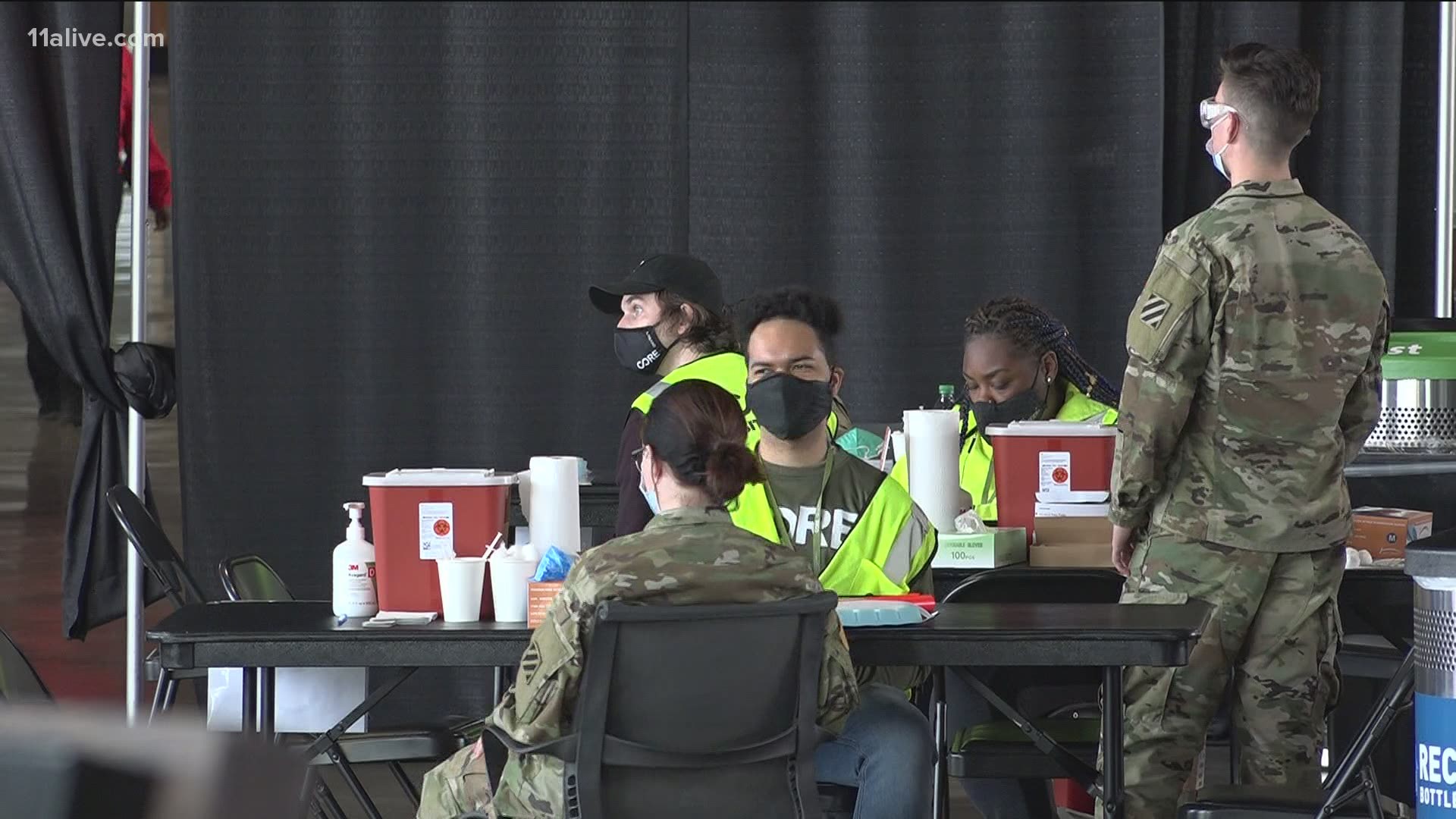 On Monday, 11Alive went behind the scenes with the team who made it happen. The events team at Mercedes-Benz Stadium is used to a challenge.

Super Bowl, Final 4, a super successful soccer team: but turning their huge stadium into a mass vaccination site in partnership with the federal government - that was a whole new challenge.

The days start early for major events coordinator Kate Dickerson. She admitted she was nervous when they first announced plans to make Mercedes-Benz Stadium a mass vaccination center.

"But you take a look around and realize what you're doing and it just kinda settles," she said.

She's worked behind the scenes for major sporting and fundraising events... and she put all of that experience to good use.

"A lot of the elements we would do for big events, we did. We put together an outline, got together with all the different departments - make sure we are on the same page,"  she said. "But that extra layer of it being vaccines added to the nervousness of it."

Dickerson has worked with Tarena Smith, senior director for stadium events, since the first COVID shot at the stadium to make sure people feel safe and confident when they leave.

"We are still focused on the guest experience, but we now basically have six mini stadiums inside one big stadium," Smith said. "So our preparation, we looked at it as: this is an event. We are not necessarily serving beer, we are having people fill out vaccination cards. But we are still servicing those guests."

Smith said they didn't want to give up good customer service just because the event changed.

"We are not looking to make you wow and cheer, although some of our divisions, some of the areas have done that after some people get vaccinated, but that has been the biggest thing," she said.

She said it's been hard to coordinate all of the moving parts, get people in and out safely, and work with all of the agencies coming together to make it happen, but she said it's worth it.

But it's not just the mass vaccination center running at Mercedes-Benz -- they're also still running sporting events at the stadium on off-hours.

They vaccinated people, on Monday, until 4 p.m. In 24 hours, they’ll be holding a soccer match at 50 percent capacity. And 12 hours after that ends, they'll be back to vaccinating people onsite.

It's an intense job that their head of security doesn't take lightly.

"The vaccination is probably the most prized possession in the world. So there's a number of policies and procedures when we take on the vaccine in the building, where it's stored, and how it's moved. Making sure we are guarded," said Vice President Of Security Joseph Coomer.

He is used to keeping things safe at Mercedes-Benz Stadium but this is a little different from what he's used to.

He said the work has been nonstop since they opened the mass vaccination site.

"This is a marathon. We are really set up to set up an event, we execute one or two days, the Super Bowl is a week Coomer said. "We are going on months of doing this. So the longevity is putting some wear and tear on our event folks. But I think this is a group of anybody that's pulled together that can execute."

They have vaccinated 221,000 people at Mercedes-Benz Stadium so far.  That's enough to fill it to capacity three times.

He said the hardest part about this whole thing was that it's never been done before - there wasn't a playbook to follow.

RELATED: Mercedes-Benz Stadium vaccine site to give as many as 42,000 shots a week

"There wasn't something we went back to, we couldn't dust off the book, and say, look, on page 7, here's what you're supposed to do," he said.

But day by day, they figured it out.

And they figured a lot of it out by treating it like any other huge event they put on.

"We do our internal audits, we do our secret shopper to see where the areas are that we need to get better at. Is it bilingual speakers at some locations, is it better wayfinding? It's the same litmus test we use at those big events," he said.

Coomer said it's actually easier, in a way, to operate on the days they have sporting events or concerts. It's what they're used to.

But on the days they're vaccinating a huge portion of the population here in Georgia, that's when he said the work is most meaningful.

"Of all the events I have ever worked - 15 Super Bowls, 10 Final 4's, national championships - this is the event that you go home at night and you know you did something tremendous for everyone," he said.

They've been doing this for more than a month now and it can be a grind, but Coomer said whenever he or his team is feeling burnt out, they just go stand at the exit for 15 minutes and watch the relief people feel after they get vaccinated. That, he said, makes it all worth it.