Many public and private providers are preventing people, who have a history of severe, allergic reactions to shots, from getting the vaccine in the first place. 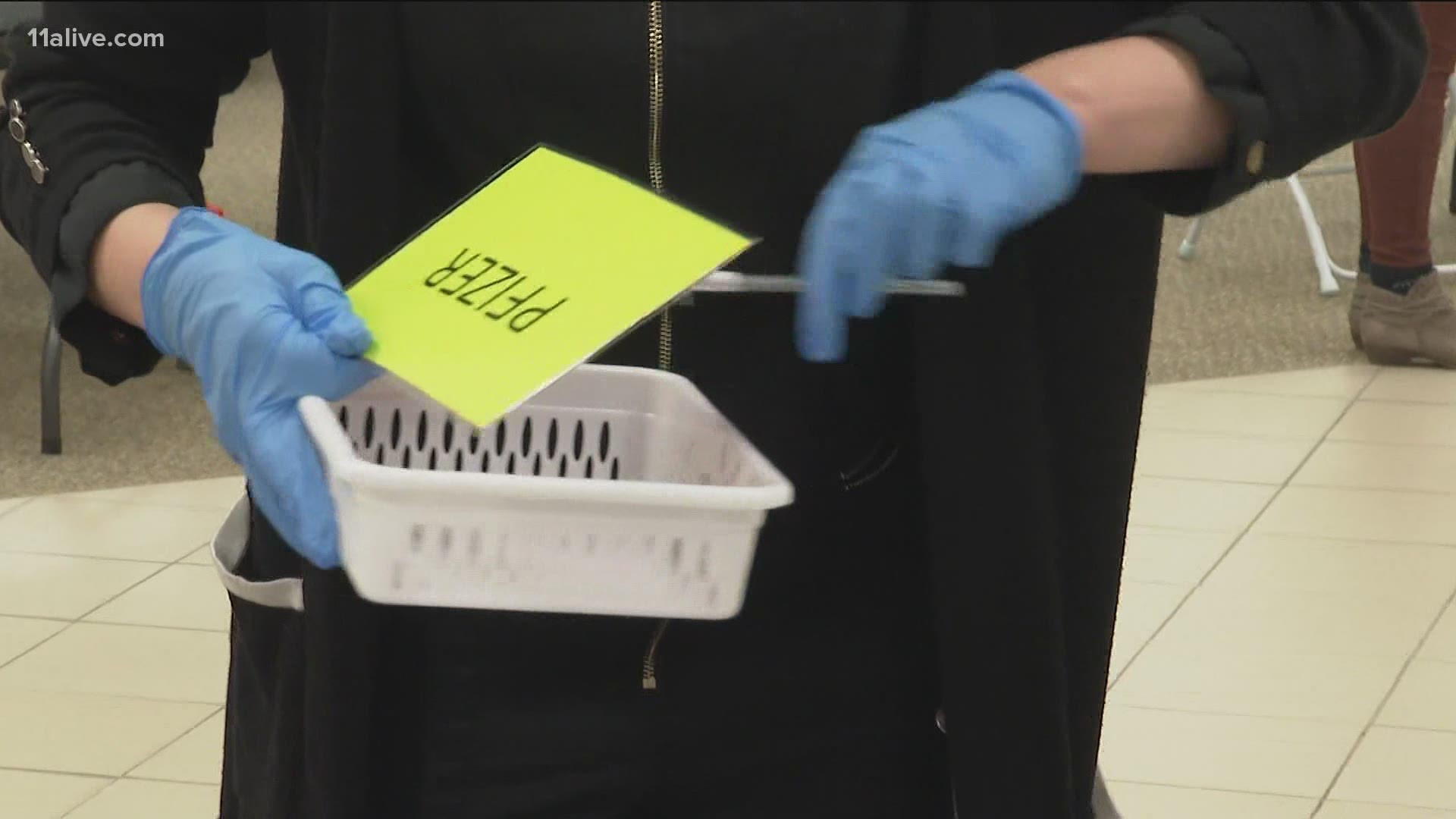 ATLANTA — New information released Friday by the Centers for Disease Control and Prevention (CDC) shows that, in the first month of COVID vaccinations, allergic reactions to the shots were “rare” – as rare as from other types of vaccines.

And to keep them rare, some COVID vaccine providers are turning away people, refusing to give them the shots, just for having a history of allergic reactions to other medications.

It took persistence and iron will for Mary Baker to get an appointment for a COVID vaccination at Gwinnett Place Mall from the Gwinnett County Health Department.

Baker is 77 and, when she arrived during her first attempt, someone helped her fill out her medical history forms since she didn’t know how to do that online, in advance. And then, when the health department staffers looked at her history, they turned her away.

“They looked at me and told me they could not give me the vaccine,” Baker said Friday.

It turns out that Mary Baker once had an allergic reaction to penicillin that sent her to the emergency room, barely able to breathe.

“And they said if I had been five minutes later, I would have been dead,” she said.

So now, the health department was telling her that, for her own safety, she needed to get her COVID vaccine in a hospital or a doctor’s office.

She said she is grateful, but, “I had been trying so hard to get an appointment to get the shot. I was really disappointed.”

Serious, allergic reaction from the COVID vaccine is a risk, according to the CDC, but, in the words of its latest report which was posted on the agency's website on Friday, “rare reports of anaphylaxis were received.”

The CDC studied the first month of the nationwide vaccination program, from mid-December to mid-January.

Roughly 13.8 million people got the shots during that first month and 62 of them had severe allergic reactions, a rate of 4.5 per one million. The CDC said that’s about the same rate as other types of vaccines.

To prevent anaphylaxis, the director of the Gwinnett-Rockdale-Newton Health District, Dr. Audrey Arona, told 11Alive News on Friday that her staff has turned away three or four people, so far, out of about 40,000 people who have received the shots as of Thursday night, because of their history of anaphylaxis as a result of inoculations.

“We definitely err on the side of caution,” Dr. Arona said. “Anyone with a history of an anaphylaxis response to an injectable medication ... would definitely not be vaccinated with our health department, and we would refer them to a safer location,” for an emergency, life-saving treatment, if necessary.

“It doesn’t mean (Ms. Baker) can’t get the vaccine, she just needs to have it done in a safer location,” Dr. Arona added.

As for people with other types of allergies, “like a bee sting, or a food item, and even those people who carry EpiPens, for those indications, we still go ahead and vaccinate these individuals. We just watch them for 30 minutes after their vaccination,” Dr. Arona said.

“I was upset, on one hand,” Mary Baker said, “and on the other hand, I figured they knew what they were doing.”

Her doctor referred her to a large hospital in Atlanta that is one of the COVID vaccine providers, but she hasn’t been able to make an appointment there, yet.

So, she is back on the hunt.

“Trying to find somebody where I can get an appointment,” with her persistence and iron will.