A spokesperson with the state Dept. of Public Health said Moderna vaccines did not ship to Georgia on Monday or Tuesday. 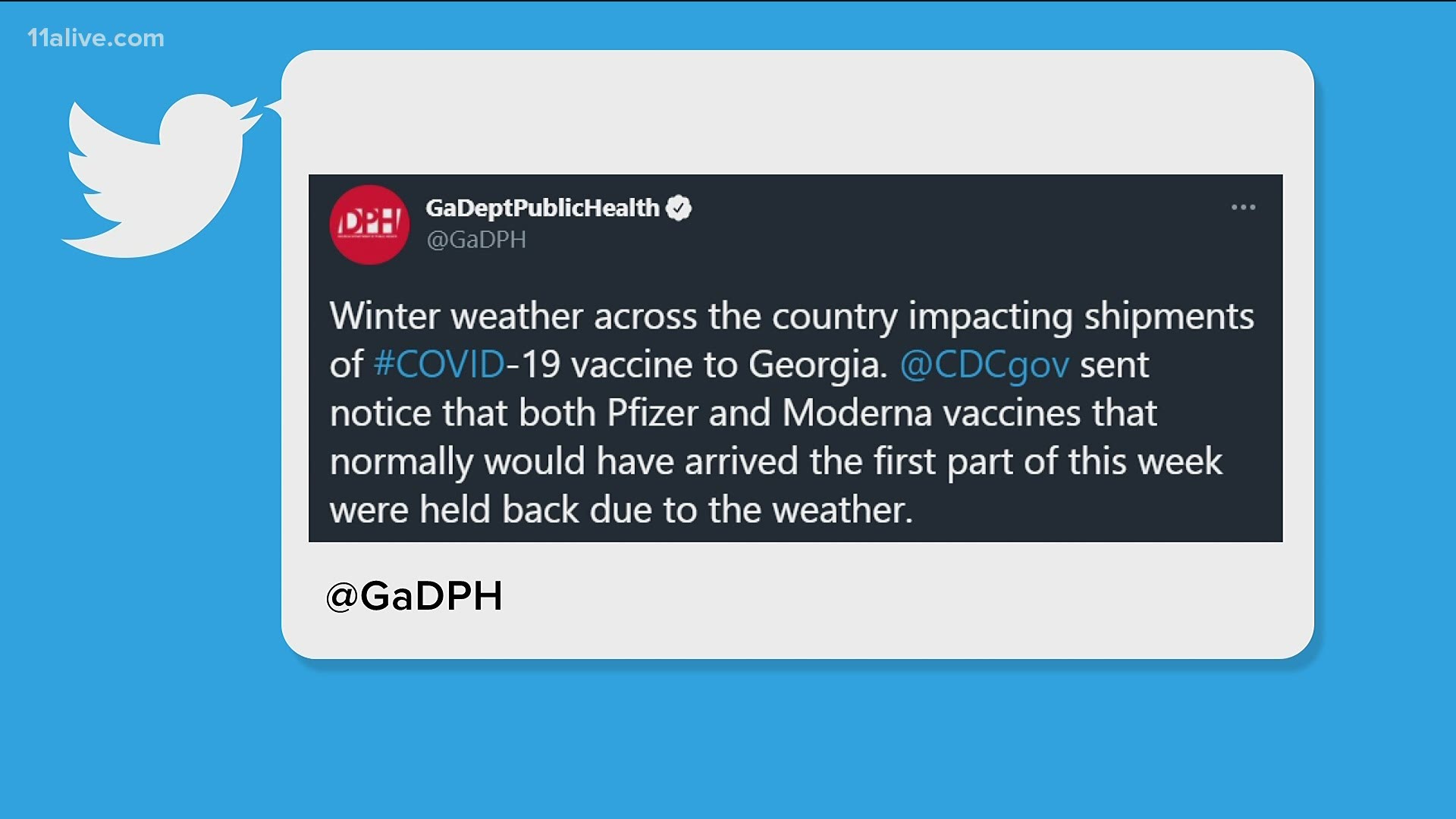 ATLANTA — With much of the country dealing with harsh winter weather conditions, the slow rollout of the COVID-19 vaccines just hit another snag.

DeKalb County said that due to circumstances beyond their control, it was forced to cancel more than 3,000 second dose Moderna vaccine appointments scheduled for Wednesday. Thursday appointments also had to be rescheduled, the county said.

The board of health said the vaccines "are delayed due to the winter weather systems impacting a major portion of the United States, and are being held until they can safely get through the supply chain."

The doses were supposed to be administered at the county's vaccination sites in Doraville and Stonecrest.

DeKalb County said it still has enough Pfizer vaccine to give first shots to those who have appointments, but not for those who were supposed to receive their second Moderna doses.

The county said those who had appointments are being contacted via email and phone regarding this situation and will be informed of their new appointment date once it becomes available. Ford said she's hopeful the county can get back on track with vaccinations, soon, when shipments arrive.

“I think that we still have an ability to catch up," she said. "Our first goal is to ensure that everyone gets that second dose.”

On Tuesday, when 11Alive asked the Georgia Department of Health if the delays were statewide, it said the shipping delays were. DPH said many providers across the state are being forced to reschedule appointments, with the new appointments dependent on when the shipments resume and arrive in the state.

Dr. Chris Rustin with the DPH told 11Alive he found out that Georgia may not receive any more vaccines until later in the week at the earliest.

“We hope to be back on track by the end of the week, at least having the vaccine out, shipped out, to the providers," Rustin said. “If these shipments aren’t able to be shipped this week, it’s definitely going to delay things for at least a week, across the state.”

The storm that overwhelmed power grids and immobilized the Southern Plains carried heavy snow and freezing rain into New England and the Deep South and left behind painfully low temperatures. Wind-chill warnings extended from Canada into Mexico.

Millions across the country are still in the dark. Utilities from Minnesota to Texas implemented rolling blackouts to ease the burden on power grids straining to meet the extreme demand for heat and electricity.

County officials distributed the doses at three hospitals, Rice University and the county jail because those places had large groups of people available where they would not have to drive and with appropriate medical personnel on hand.

-- The Associated Press contributed to this report.