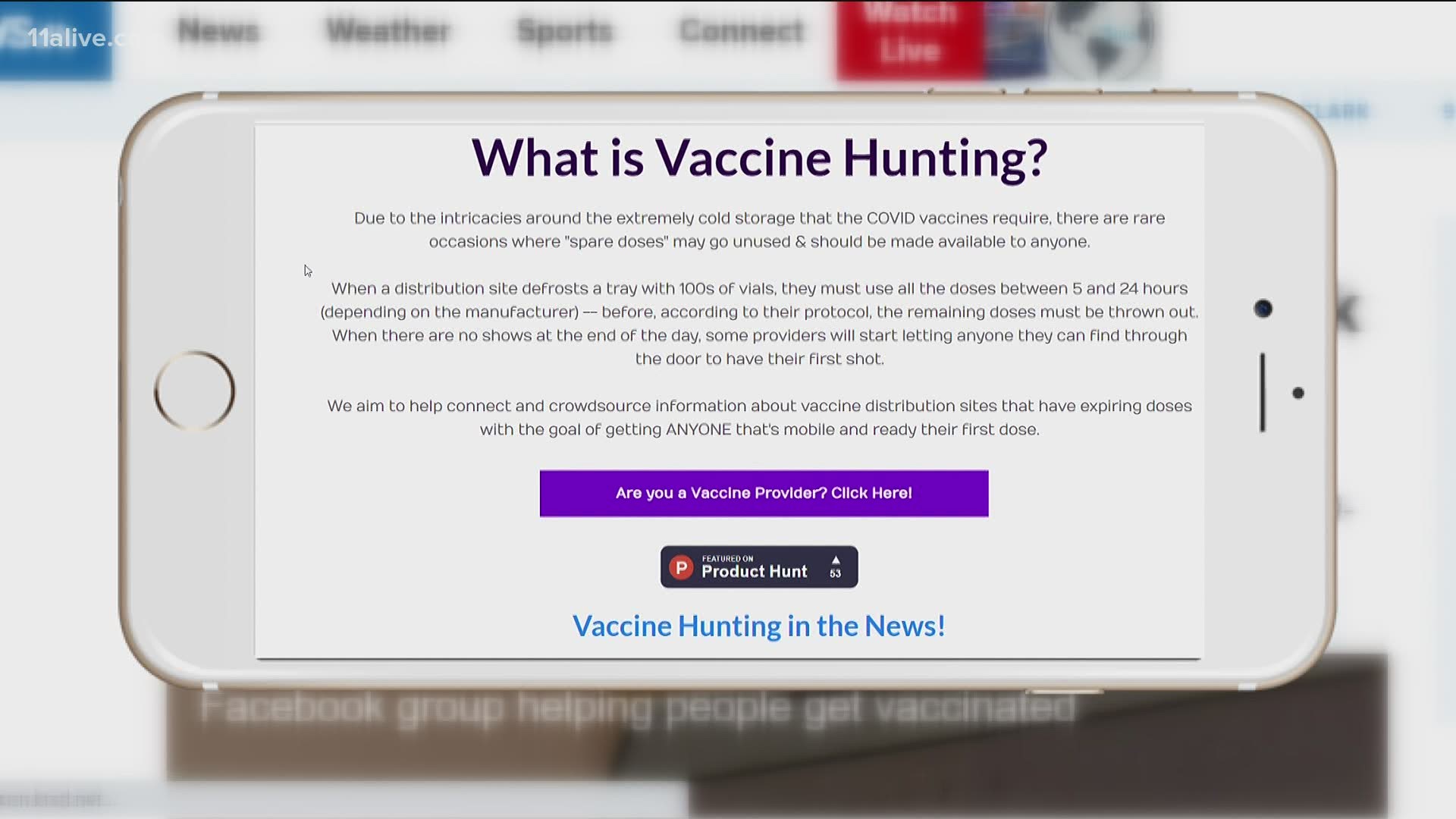 Some groups were started to help seniors and high-risk people navigate the sometimes-confusing appointments systems, while others were created to make sure doses of the vaccine didn’t go to waste.

Here, in Georgia, Ashley and Alicia Chen started their own group, after reading about a similar group started in New Orleans.

“Just with the rollout being as chaotic as it's been, I just felt like there was an opportunity for people who need the vaccine, but aren't necessarily falling within the CDC 1A group; to kind of fill in the gaps if there was any spare vaccine available,” Ashley explained.

Vaccine hunter groups have popped up in Minneapolis, New Orleans and Colorado. There’s even a larger website, vaccinehunter.org, that helps people crowdsource information about appointments and “spare” doses.

With 1,400 members and growing, the group, called Georgia Vaccine Hunters on Facebook, connects people with information about appointments and policies at different vaccine locations.

“My aunt was supposed to get her second shot today," one post reads. "The news states that all appointments there are to be rescheduled due to delays from the weather. We/she have not been contacted by anyone to reschedule or even to say it was canceled. Does anyone know if she will be contacted, or should I start looking to schedule her an appointment again?”

Another states: “Update; My hubby & sister, both 65+ got their 2nd vaccine at Kroger/Dalton today. There was no line or wait for appointments. Please call to schedule available appts.”

The posts continue to vary - from people asking about the qualifications for caregivers to get the vaccine, to people who live out of state asking for information to get their Georgia parent the vaccine.

“We've had some success stories of people who have put their names on waitlist and pharmacies," Ashley said.

The group also posts information from people who have tried to get a “spare” vaccine, or a dose that would otherwise be thrown away if someone missed an appointment. Companies like Kroger implemented a policy to give the vaccine to people in the store that meet the eligibility requirements, if the vaccine is set to expire.

The Chens moderate the page, eliminating false information or unethical posts. The husband-and-wife team said they’re not judgmental, but made it a strict policy in the group to weed out “line-jumpers.”

“We’re not trying to access a scarce resource right now, before someone else who is more at risk and more deserving to get the vaccine. We are simply just trying to prevent vaccine from going to waste,” Ashley explained. “Our thought is that everyone just needs to get vaccinated. And if you can do it ethically, that is what we're there for.”

Alicia concurred, “At the end of the day, you know, hey, if you find a vaccine, I'm not going to judge you if you're not in the phase that you should be in.”

"Do I throw away a good vaccine that can protect people from a disease that can be deadly? Or do I give it to whoever I can find before it expires?” said Wolpe. He said he believes it's unethical for a person to seek out the vaccine ahead of those who need it, but added it's a different situation if a medical professional finds themselves making the decision to give a vaccine that might expire to the closest person they can find.

"If it's being offered to you because the alternative is wasting it, I think you have every right to take that vaccine," Wolpe said.

According to the Georgia Department of Public Health, roughly 5,800 doses of the vaccine were unused, as of the latest numbers available on Feb. 22.

Another 1,130 were said to have been damaged. And a smaller number, 236 were said to be missing or unaccounted for.

Ashley and Alicia said they haven’t seen any anecdotes of people who fall outside the eligible group getting a vaccine that is set to go to waste. Instead, they’ve seen more people get help for loved ones who have trouble accessing information.

“A lot of these sites are all web-based, so it's not like you can pick up the phone and make a call and easily schedule an appointment. You have to actually physically schedule it online," they said. "So, our page has kind of morphed into also just helping some of the elderly population schedule the appointments that they need.”

Neither Alicia nor Ashley have received the vaccine yet, although Alicia qualifies as a caregiver to her widowed mother, who has received the vaccine. The two said they hope to get access to more resources to eventually help people physically get to a vaccine appointment. They hope as the process of getting vaccines is more streamlined and less doses wasted, there will no longer be a need for their group. Until then, the private group is open for anyone to join.