Despite new COVID vaccine eligibility groups in Georgia, specifics on who qualifies unclear

On March 8 COVID-19 vaccine eligibility in Georgia will expand. The GA Dept. of Public Health is still determining specifically who the expansion will include. 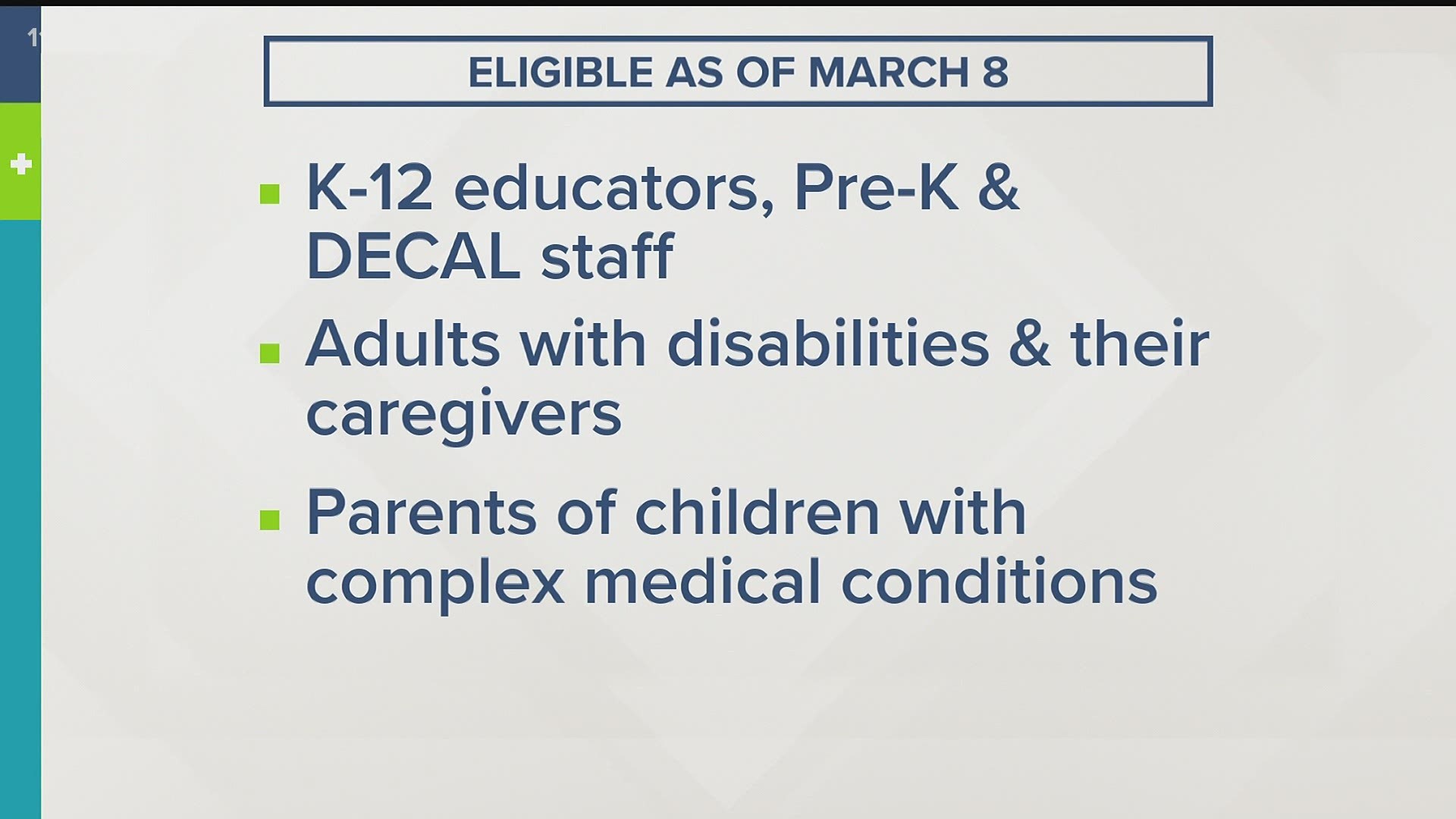 ATLANTA — In 10 days, COVID-19 vaccine doses will be made available to several new categories of Georgians.

Governor Brian Kemp announced, Thursday, the expansion will include pre-K through twelfth-grade educators and staff, adults with intellectual and developmental disabilities and their caregivers, and parents of children with complex medical conditions.

The first category covering educators is straightforward and, currently, school districts around the state are making plans to either administer vaccine shots directly to their employees or assist them in finding appointments to receive the vaccine.

The two other categories though are vague.

When asked for clarification on Friday of what specific disabilities or conditions would qualify and whether parents or caregivers will need to supply any documentation, Georgia Department of Public Health spokeswoman Nancy Nydam wrote, "Specifics are still being worked out and discussed internally on all of these topics. We will have more information next week."

Nydam also wrote, "Verifying who does and doesn’t qualify and definition of complex medical conditions is still being discussed internally. More to come on that."

"We are putting together a committee that ideally involves an ethicist to think through because there are many, many children of chronic health conditions that may not be as vulnerable as others," Toomey said. "We want to at least at the beginning, again when the vaccine is short, to make sure that we focus on those most at risk."

"From genetic conditions like down syndrome to conditions like being on the autism spectrum," those are some of the disabilities Dr. Harry Heiman sees as possibly qualifying under the vaccine expansion for adults with intellectual and developmental disabilities.

Heiman, with the Georgia State University's School of Public Health, isn't involved in helping the state set the qualifications, but he said research has been done examining people with such disabilities and how COVID-19 impacts them.

In adults, he said people with such disabilities require various levels of care and often can live in group homes.

As the state prepares to expand vaccinations Heiman said the governor is taking steps in the right direction.

"I'm really pleased to see Governor Kemp include teachers and adults with developmental and intellectual disabilities," he said.

Up next though he would like to see essential workers included, such as restaurant employees, bus drivers, and others having to work in-person to remain employed.

"For a number of reasons the group of people 65 and over kind of jumped in front of them. While there was a good reason to think about that I think it leaves some critical people out.," he said.

Despite having not finalized specifics for eligibility in the new vaccination groups, GaDPH estimates more than 1,200,000 new people will become eligible for the vaccine on March 8. The following are the estimates for each category provided by GaDPH. 11Alive requested the sources for each estimate, but those details haven't yet been provided.