Georgia Governor Brian Kemp said Tuesday, “I do not and will not support any kind of state-mandated vaccine passport." 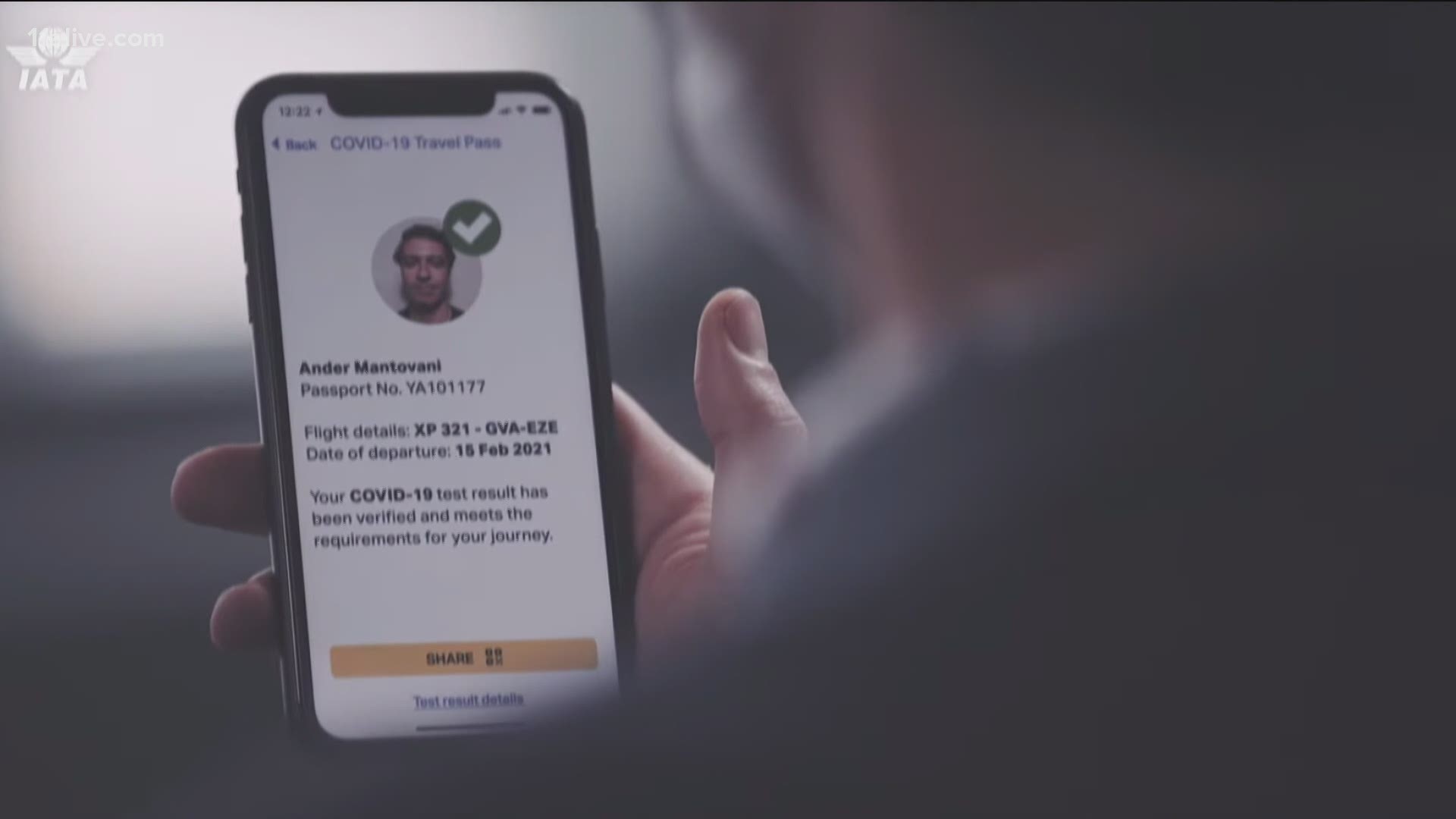 ATLANTA — Opposition is increasing against so-called “vaccine passports.” The idea is to require people to show proof they’ve been vaccinated against COVID-19.

No proof could mean no access to concerts, restaurants, air travel,  and other places that want to require proof.

Privacy advocates claim that would be crossing a line far beyond the public-health advantages.

Many airlines and governments around the world are getting ready to provide travelers with access to a smart-phone app that will allow them to show proof that they’ve received a COVID vaccine, before they could board a plane or enter a country.

The promise is that all personal data would be encrypted and would remain only on a person’s phone, not on someone else’s server.

The expectation is that requiring so-called “vaccine passports” or “vaccine credentials” would protect public health and safety.

And vaccine credentials wouldn’t just be required for air travel.

Microsoft and the Mayo Clinic and others have formed the Vaccine Credential Initiative.

They’re coming up with a standardized vaccine credential that people could carry with them, on a smart phone or on a piece of paper—as a requirement to get into a baseball game, or a grocery store, or a restaurant, or a plane, or anywhere else.

Georgia Governor Brian Kemp posted on social media Tuesday, “I do not and will not support any kind of state-mandated vaccine passport," he wrote.

He added that "the decision to receive the vaccine should be left up to each individual.”

RELATED: Gov. Kemp says he does not support idea of vaccine passport

In practice, some people who want a vaccine but cannot get one ­,such as for reasons of medical conditions or access to the vaccine, would not be able to get the vaccine card. And others who received the vaccine but would not want to show proof on demand could also be left out.

“There’s compelling reason to do it, it helps to reduce the spread of disease,” Wolpe said, ”but the actual implementation of it is really problematic. You end up creating two classes of people - one with privilege, one without - and because of the way vaccination trends happen in our country, the one without tends to be poor, tends to be more people of color, tends to be the disenfranchised.

Already, governors in other states are banning their state governments and private businesses from requiring vaccination IDs.

Still, the U.S. has long required children to have certain vaccines, before children can enroll in schools.

And many countries have long required travelers to have certain vaccines before they can get visas, and some countries are now adding the COVID vaccine to their lists—which the World Health Organization opposes.

“We would not like to see the vaccination passport as a requirement for entry or exit” in and out of countries, said Margaret Harris of WHO, "because we are not certain that - at this stage - that the vaccine prevents transmission. And there are all those other questions, apart from the question of discrimination against the people who are not able to have the vaccine for one reason or another."

On Tuesday, White House Press Secretary Jen Psaki said President Joe Biden does not support vaccine credentials being required by the government or by the private sector.

“The government is not now, nor will we be supporting a system that requires Americans to carry a credential,” Psaki said. “There will be no federal vaccinations database and no federal mandate requiring everyone to obtain a single vaccination credential.

"As these tools are being considered by the private and nonprofit sectors, our interest is very simple from the federal government, which is Americans’ privacy and rights should be protected, and so that these systems are not used against people unfairly," Psaki said.