While Gov. Kemp toured a mass-vaccination site in Gwinnett County, he questioned what he called a delay in APS' vaccination plans. The district responded. 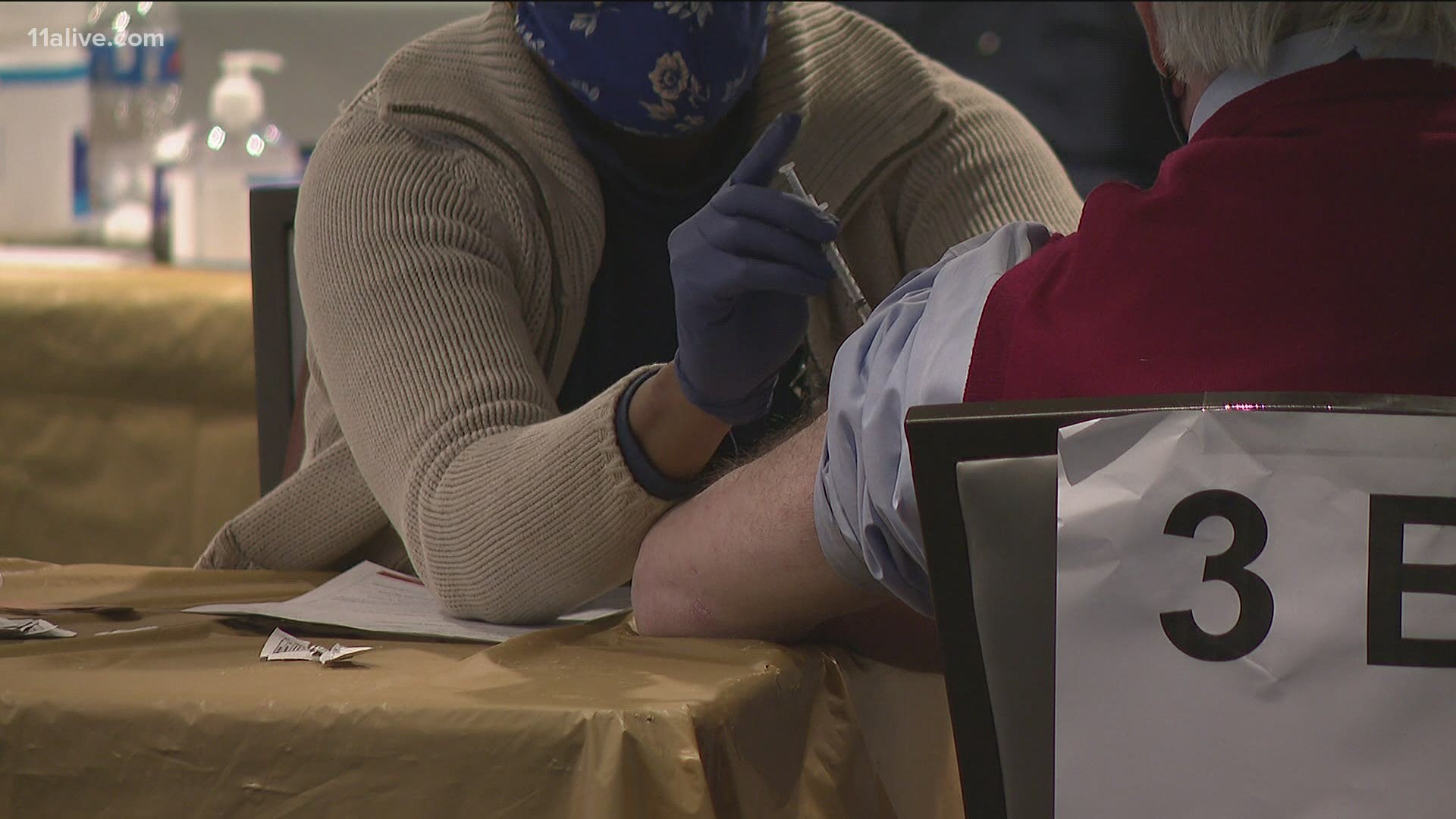 GWINNETT COUNTY, Ga. — At the mass vaccination site at the Gwinnett Place Mall, 1,800 people were on the schedule to get vaccinated for COVID-19, including 600 teachers.

Amy Caubel was one of them.

"I was going around school going: it's vaccination day!" Caubel recalled.

Caubel said it's the first step to getting back to normal and described the process as smooth.

"It was like as easy as going through the Chick-fil-A drive thru," she compared. "I mean, it's certainly well run, very organized."

Gov. Brian Kemp toured the site to observe the process. He said during his walk-through, he was impressed in what the team has been able to accomplish.

"There are school nurses working in conjunction with regular folks who have been here the last several weeks to help with the expanded criteria," Kemp described.

While he praised Gwinnett, he had sharp criticism for Atlanta Public Schools. Almost exactly a month ago, the district's board of education approved a resolution pleading with the governor to allow educators to get the vaccine.

But the Governor said even after 10 days of advanced notice, the district isn't offering shots Monday, the same day eligibility opened to educators.

"They knew dang well I couldn't do that, we didn't have the supply to do that and I said that," Kemp fired. "It was pandemic politics at its best, and now they're gonna wait two to three weeks. I believe they're doing a disservice to their teachers."

In a statement sent to 11Alive late Monday afternoon, APS said it did have vaccination plans for the first day available. Additionally, the district said it's been working with Fulton County (and has been coordinating with the county since December) to secure 8,000 doses to guarantee appointments for its school staff later this month.

Based on the availability, the district said it has scheduled mass vaccination clinics at Mercedes-Benz Stadium March 24, 26 and 27, with Fulton County as it expects a large allotment of the vaccine to arrive on March 22.

The district called Kemp's comments "unfortunate" and said they do not reflect the planning and commitment APS has to protect its students and staff.

"APS has been a state leader on the COVID-19 issue in public schools from day one. We were not only one of the first systems to go virtual to protect our staff and students, we were the first to use COVID-19 surveillance testing in our system to detect COVID-19 and reduce its spread," district Superintendent Dr. Lisa Herring said in a statement.

"APS is thankful that the Atlanta Board of Education advocated in February for accelerating the availability of the COVID-19 vaccine for our educators at a time when educators were not expected to be vaccinated until much later," the statement continued. "Now, APS will vaccinate thousands of our employees as part of the Community Vaccination Center at the Mercedes-Benz Stadium later this month."

In an email sent out to staff, APS said the second dose will be administered April 14, 16 and 17 at Mercedes-Benz Stadium. The email also said that according to Fulton County health officials, the district has secured enough allocations of the two-dose Pfizer vaccine for up to 8,000 APS staff and contractors.