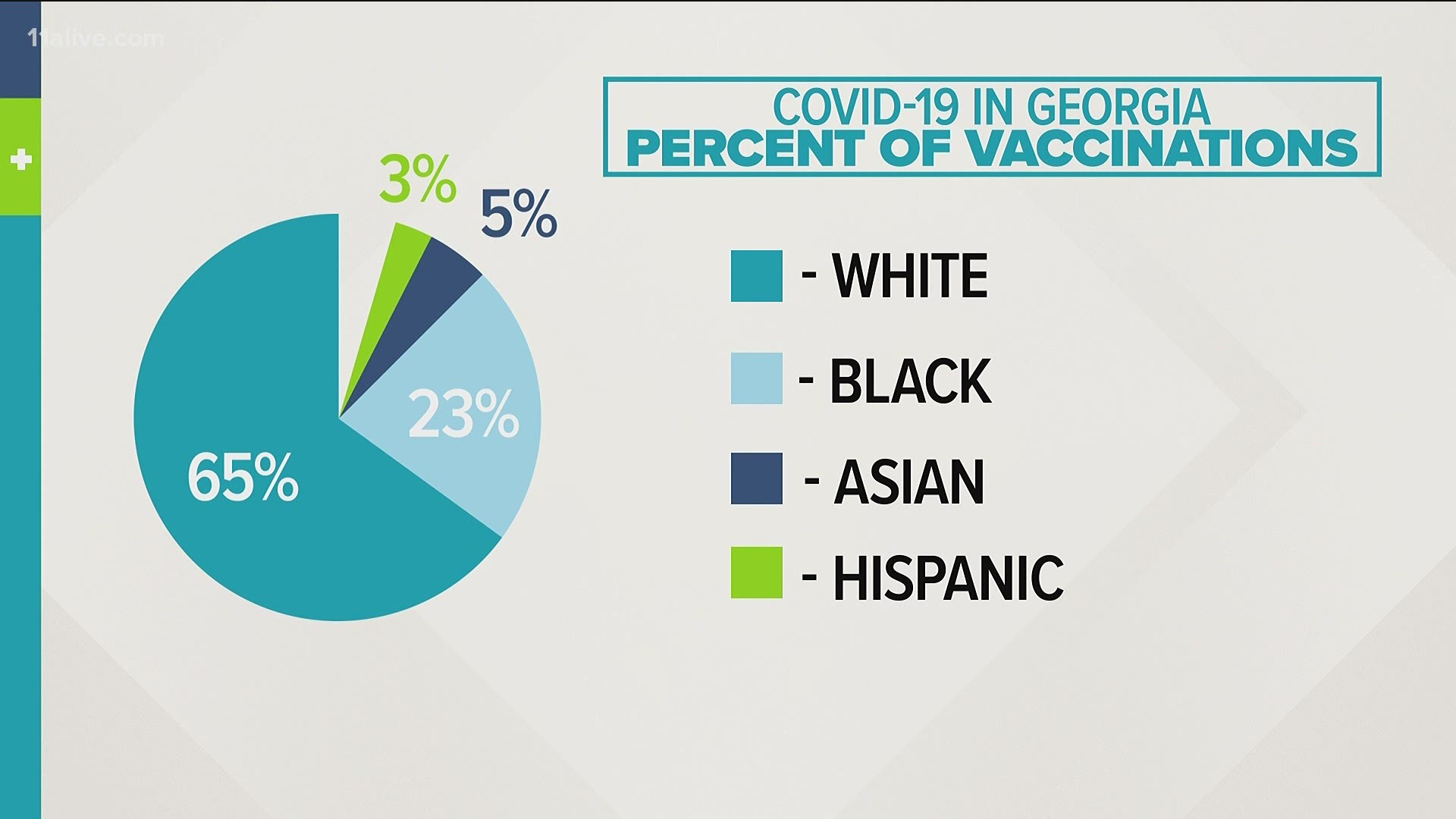 While people of color have been disproportionately affected by COVID-19, minorities have been vaccinated at a far lower rate in comparison, according to the Kaiser Family Foundation.

The Kaiser Family Foundation noted a consistent pattern, across all states, of minorities receiving smaller shares of vaccinations compared to their shares of cases and deaths while looking at the total population. The group noticed since March 1, the share of the population who has received a COVID-19 vaccine has increased across racial and ethnic groups, but vaccination rates for White people have remained higher comparatively since that time.

CORE, a nonprofit organization with a background in disaster relief, is working to try and level the playing field when it comes to vaccine equity. The organization, with help from local government entities and health boards, oversees mobile testing and vaccination clinics across Fulton, DeKalb and Cobb Counties.

"There’s always going to be some trust barriers between government entities and some discriminated populations," Sam Archbold, CORE's Metro Area Manager, said. "So by having a nonprofit private entity be able to come in and really help bridge those gaps has been a corner we’ve found ourselves to serve very well in.”

Archbold said CORE works with community leaders, business leaders and churches to figure out where best to mobilize the clinics. He said the Georgia Department of Public Health, along with local health boards, allow CORE to target communities with contact tracing initiatives and resource coordination.

“To accomplish equity, you have to be very active. It’s not going to happen passively,” Archbold said. “They know the heart of those communities. They know the struggle of those communities. It’s finding those people and inviting them to the table. Public health does not discriminate between undocumented, doesn’t matter where you’re from. You are existing in a community, therefore you are an entity of public health."

Wasly Castillo drove up to get his first vaccination dose, eager to move past the loss 2020 brought him and his family.

"It offers peace, it offers tranquility," Castillo said. "It offers the chance to see your friends and a chance to hug my mother. The fact that it’s a mobile clinic, and they’re not just waiting for people to come to them but they’re going out there, it’s critical. That’s huge. The easier you can make this, the more people will come out."

CORE has run testing sites in the past, holding up to 40 events across Metro Atlanta. Archbold said the experience in running testing operations has helped with a smoother rollout on the vaccination efforts. The nonprofit gets funding from counties and the federal government. Private donors also contribute to CORE's work.

“We will send counselors, sit down with them to explain what the facts are, and we also have a major advertising, marketing advertising campaign designed to speak to these underserved communities," Pitts said.

Dr. David Holland, chief clinical officer with the Fulton County Board of Health, said some of the fixed vaccination sites were running into problems previously. Seniors were finding it hard to book appointments, Holland said, so the focus turned to blocking off appointments, knocking on doors in underserved communities and collaborating with third parties to increase the vaccination rate.

“The vaccines are the way out, and we really want to make sure every resident in Fulton has equal access to the vaccine, the best information about the vaccines, and really get as many people vaccinated as we possibly can," he said.

CORE expects to have nearly one dozen mobile vaccination clinics across Fulton, DeKalb and Cobb Counties by the end of April.

The Kaiser Family Foundation suggested several strategies in ramping up the vaccination rate among communities of color: