The resolution from two council members urges the Georgia DPH to add the CDC's full list of essential workers to the state's current vaccination phase. 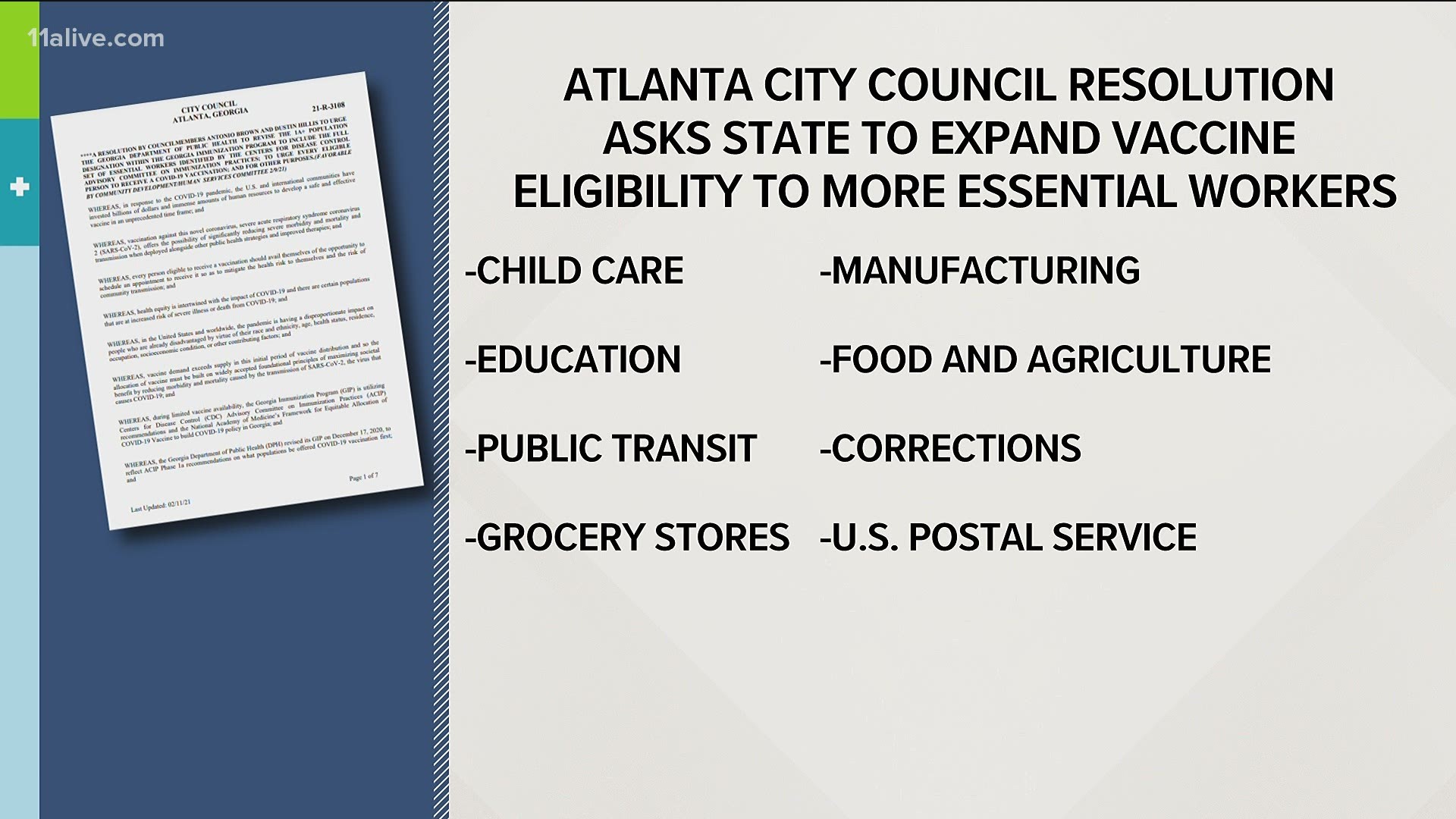 ATLANTA — On Monday, the Atlanta City Council voted to pass a resolution urging the state to make more essential workers eligible at this time for the COVID-19 vaccine.

The resolution, from Council members Antonio Brown and Dustin Hillis, which passed 14-0 as part of the consent agenda for Monday's council meeting, specifically requested the Georgia Department of Public Health revise the 1A+ population category, which defines who is currently eligible to receive the vaccine in Georgia.

That category makes the vaccine available only to health care workers, long-term care residents and staff, people 65 years and older along with their caregivers, and emergency responders.

“I’ve gotten hundreds of calls from residents that have been essential workers during the pandemic that have sustained our small businesses and business community-at-large, that have been operating in professions in retail, grocery stores, restaurants, educators - folks who have truly put themselves at risk for the betterment of our communities who weren’t initially included in the 1A category,” Brown told 11Alive Monday during an interview.

Brown’s resolution calls on the state to expand eligibility during the 1A+ phase to include the CDC's full list of essential workers. It includes individuals working in child care, education, public transit, grocery stores, manufacturing, food and agriculture, corrections, and the U.S. Postal Service.

In January, superintendents representing nearly a dozen Atlanta metro area school districts sent Gov. Brian Kemp a letter asking for him to add educators and school staff to the 1A+ population. Earlier this month the Atlanta Board of Education passed a resolution make the same request for educators.

On both occasions, though, Kemp said the state isn’t receiving large enough allotments of vaccine doses to take care of the current 1A+ population and also expand the category to include more Georgians.

"In response to your resolution: I agree," Kemp wrote in a letter addressed to the Atlanta Board of Education. "If the state were receiving adequate supply of the COVID-19 vaccines, Dr. Toomey and I would quickly move to expand the vaccination criteria."

Brown said he talked recently with Kemp about the calls he has received as a council member, and while he admits the resolution won’t lead to an immediate expansion of who can receive the vaccine, Brown wants to make sure the voices of Atlanta residents are heard.

“I thought it was important that at least the city acknowledges the fact that we hear these residents, that we understand their concerns, and that we are fighting to ensure that they’re made a priority within the city of Atlanta,” Brown said.

Kemp, during a Monday morning press conference, said he hadn’t heard directly from the Atlanta City Council specifically about its resolution.

“I’ll wait to see what they have to say before commenting,” Kemp said when asked about the resolution.

He signaled, though, in his comments that the state is still not able to expand beyond the existing 1A+ population at this time because of limited vaccine supply, and it is unknown when it would move to phase 1B.

“As far as when we are going to expand, it is really too hard to tell, not knowing what we don’t know,” Kemp said, referencing limited information from the federal government of when the state’s weekly doses allotment could significantly increase.

“We pleaded for people to be patient with us, because we just have limited supply. That is a fact,” Kemp said. “There is not anything Dr. Toomey, or I, or General King, or our whole team could change to that. That is going to rely on the manufacturers and the vaccine approval process to open up more vaccines and have more doses shipped.”

Meanwhile, Mayor Keisha Lance Bottoms mentioned in a Feb. 2 meeting with the Rotary Club of Atlanta that she signed a letter along with mayors from around the country asking the Biden administration to send doses directly to major cities.

“Nobody knows our communities better than we do,” Bottoms said during the meeting. “Unlike some other cities, we don’t control our public health department, but we know the tremendous impact COVID-19 has had on our communities directs our cities. So, we are asking for a vaccine allotment directly.”

At the time, she hadn’t received a response to the letter and 11Alive followed-up Monday with her office to ask if a response has now been received.