The Madzin twins present an extraordinary chance to learn about a disease that claims all of its victims, but whatever is discovered will not help them. 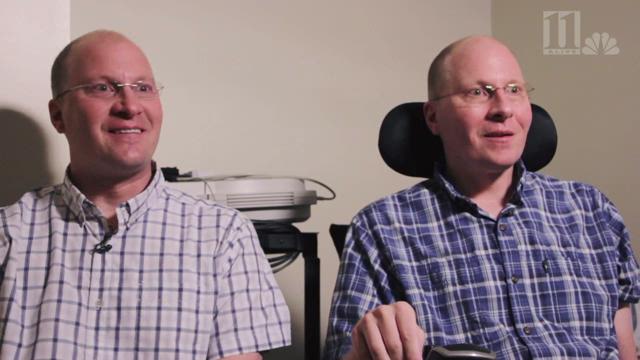 He grabs the can out of the refrigerator at Emory Brain Health. “I wanted to get John a Coke. He doesn’t drink caffeine so I got him a ginger ale.”

Michael Madzin pays for his brother’s drink and makes his way down the hallway, a slight limp the only sign of what he is going through. Michael not only knows his brother’s favorite drink, he knows John almost as well as he knows himself. Michael and John are identical twins, and they’ve remained incredibly close for 47 years.

Michael delivers ginger ale to John and the two talk about being twins. John smiles. “You have a friend for life.”

Not just a friend, but one who chose the same path. Michael and John both became financial planners, both chose to do Ironman Triathlons together. The two even dress alike (although they do not shop together, they just happen to like the same clothing), down to identical glasses.

Michael says the day before an Ironman in the fall of 2016, he and John went out for a row on the water and John complained of weakness in one arm. Not long after that, “We started comparing notes. John was like I had that.”

“Let’s see how you’re doing today.” Before Doctor Jonathan Glass, the founder of the Emory ALS Center, examines the brothers, they pose for a photo. He has the same glasses as the twins and they rib one another for their great sense of style. Glass says what is astounding about the Madzin twins is that while they are identical, the way the disease is manifesting in them is drastically different.

As Dr. Glass examines John he asks, “Can you move your fingers? Can you move the leg at all? Toes?” Each time, the answer is “nothing.”

In stark contrast, Michael is still walking and working. Exercise is gone because his legs feel too heavy and the exhaustion is unbearable.

John explains that his symptoms,”Started on my left and then up. Mike is going be the mirror opposite of me. It started on his right.”

A few weeks later their sister Nicole tells a story in John and his wife Jenny’s home in Chattanooga Tennessee. “When John got a cavity in one tooth, Michael would have a cavity in that same tooth a month or two later.”

If one brother would slam his hand in the car door, as soon as they got back from the doctor visit, the other brother would do the same. They seemed destined to follow each other, through good times and bad.

“Where was that? Niagara falls?” They page through the family photo albums of their youth, and the photos tell a story of how ALS has taken away so much.

A genetic mutation known as SOD 1 caused the disease. Sisters Andrea and Nicole have chosen not to be tested for the gene, but they have a 50/50 chance of having it. None of them have had children.

Nicole begins to cry, “The fact that none of us had genetic kids. This is the end of it.”

Doctor Glass says there is something other than genetics that is causing identical people to have different versions of the ALS.

“That might argue that there are things that occur to our genes as we live, called epigenetics, that may influence how those genes are expressed later in life.”

The Madzin twins present an extraordinary chance to learn about a disease that claims all of its victims, but whatever is discovered will not help them.

The brothers have raised over $17,000 for Doctor Glass’s research by selling t shirts, doing it the way they’ve done everything in life, together.

Michael breaks down talking about John, “I just don’t want John to have it. I don’t.”

An extraordinary bond, holding brothers together on this final leg of their life’s journey.

John Madzin is now in hospice. His twin Michael is spending every moment he can, with him. The money the Madzin brothers raised will be used to continue searching for answers and a cure.