"Hopefully with this news being spread around it will be able to save some lives down the road."

Kratom is a natural herb popular in some circles for its perceived power to ease symptoms ranging from opioid withdrawal to fatigue and diarrhea. It is also at the center of a new Food and Drug Administration public health advisory after at least 36 people have died taking it.

Bob Grove's son John is one of those people. Jon was 34 years old when he died. When he arrived to Northside Hospital in Cherokee County, doctors gave him multiple doses of the drug that reverses overdoses but he didn't respond.

John died on November 19, 2016. Autopsy results revealed that that he overdosed on Mitragynine, or Kratom. The overdose forced a heart attack. He also had blood on his lungs.

That's when Bob found out the truth about what his son had been taking.

John had been off opioids for two years before his death but he had apparently been chewing Kratom to stay under the radar of his probation officer. John had a felony drug conviction and took regular drug tests but Kratom isn't illegal. 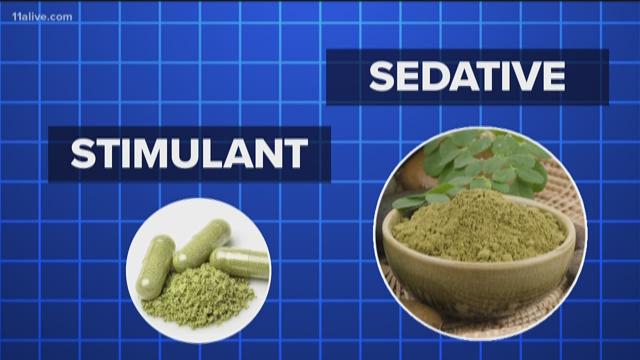 "I think he was doing this to get his high and still pass the drug court testing -- which he did, successfully," he said.

The federal government wants to change that. Last year, the DEA pushed to put Kratom on the Schedule I list because they say it has a high potential for abuse, they rescinded it to give it more time for public comment. The DEA was waiting for the FDA to do their scientific research which they now have.

On Nov. 14, the FDA issued their public health advisory. The advisory reads "evidence shows that kratom has similar effects to narcotics like opioids, and carries similar risks of abuse, addiction and in some cases, death. Thus, it’s not surprising that often kratom is taken recreationally by users for its euphoric effects."

Dr. Gaylord Lopez is the director of the Georgia Poison Center and said they've been hearing more about Kraton across the nation over the years.

"We are seeing more and more of this in emergency rooms, more and more people having really bad side effects to this drug," Lopez said.

However, in Georgia, the uptick in cases is not as steep as the country as a whole.

Lopez said there need to be more studies done on the drug.

"For sure there are people who are making all these claims about its effectiveness in everything from opiate addiction to even treating Lyme disease, but the problem is a lot of these reports are anecdotal in nature. There are no clinical trials or studies showing the effectiveness of this drug and, in some cases, you can see people suffer from really bad affects sometimes even death."

"Hopefully with this news being spread around it will be able to save some lives down the road," he said.

"He was in and out of drugs for the last 10 years. Started with marijuana and then, of course, it moved fairly rapidly into the opioid, the hydrocodone, oxycodone family," he said.

"This got him in trouble eventually...He finally got caught enough times for his penalty was severe enough to have him get either a long sentence in jail or two years of the drug court, so he chose the two years of drug court and he was clean for two years."

John was using Kratom as chewing tobacco, according to his dad.

"It was under his tongue all the time," Bob said.

"Sure makes you appreciate living every day. Reading in the air, smelling the smiles, looking at sunlight or rain. Man, you really respect that because when you’re looking down at your child that’s passed, what a terrible feeling."