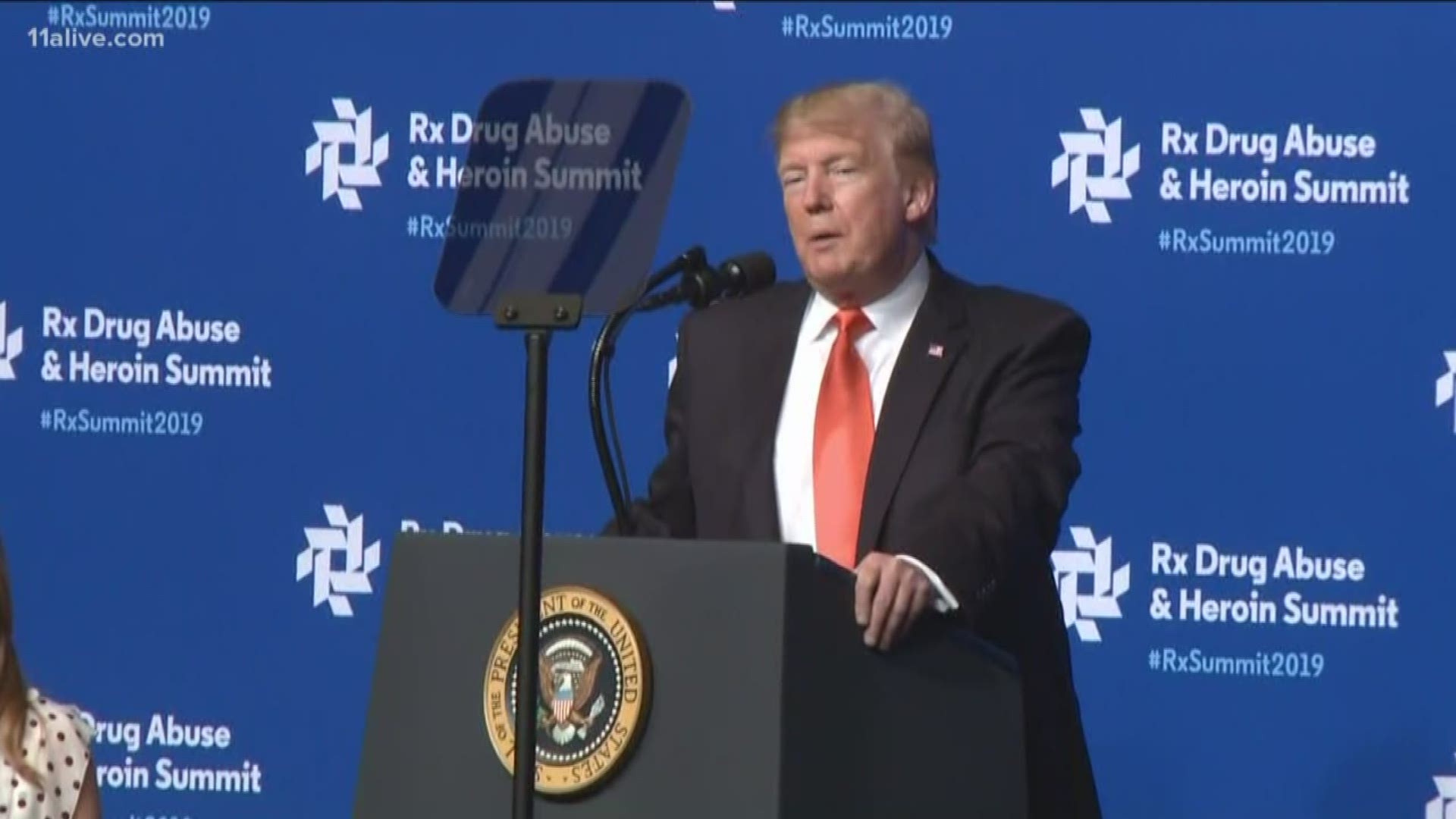 ATLANTA — President Donald Trump pledged Wednesday to battle the deadly epidemic of opioid drug abuse "until our job is done" and he claimed progress even though it is unclear whether the crisis has diminished.

Trump spoke at an annual conference of health, law enforcement, elected and other officials who work to combat drug abuse and addiction, and used the appearance to advocate for the wall he wants to build on the U.S.-Mexico border, saying it will help keep drugs out of the U.S. His wife, Melania, introduced him.

"My administration is deploying every resource at our disposal to empower you, to support you and to fight right by your side," Trump said. "We will not solve this epidemic overnight but we will stop. ... We will never stop until our job is done."

Before leaving the White House for the Atlanta event, Trump claimed credit for progress in combating the drug scourge.

"It's a big problem. It's a big addiction and we're handling it," the president told reporters. "We've made a tremendous amount of progress." He said doctors, laboratories, clinics and drug companies have assisted the administration.

Credit: AP
President Donald Trump and first lady Melania Trump board Air Force One for a trip to Atlanta to attend the "Rx Drug Abuse and Heroin Summit," Wednesday, April 24, 2019, in Andrews Air Force Base, Md.

Opioid abuse claimed a record of nearly 48,000 American lives in 2017. An estimated 2 million people are addicted to the drugs, which include both legal prescription pain medications and illegal drugs such as heroin.

While prescription opioids initially accounted for most deaths, the epidemic is now driven by illicit heroin and fentanyl. Those two drugs were implicated in the vast majority of opioid overdoses reported in 2017, according to federal figures.

RELATED: Why did opioid deaths surpass the number of traffic fatalities in the U.S.?

Keith Humphreys, a drug policy adviser to presidents from both political parties, said some states are making progress, but not because of action by Trump. Humphreys said other states have regressed.

Humphreys said Trump's declaration of opioids addiction as a public health emergency in 2017 failed to translate into significant concrete action. Members of Congress, he said, "figured out they were going to have to do it themselves and they did."

Trump said the administration has committed $6 billion to combat the crisis, set aside money to prevent youth substance abuse, and increased the distribution of the overdose-reversing drug naloxone.

Katherine Perticone attended the summit from Chicago. She said she's seeing the impact already in her community.

"And it's allowing us to provide treatment to the west side of Chicago," she said. "You know, universal screening all the patients who come into our hospital.

"We are literally saving lives as a result of the grants we got," Perticone added.

Trump talked about allowing states to use Medicaid dollars to pay for residential treatment, legislation to help women and babies born dependent on opioids, and treatment for veterans.

He said that almost 400 miles of wall will be in place along the border with Mexico by the end of 2020 and that it "will have a tremendous impact on drugs coming into our country."

The first lady spoke briefly about her visits to hospitals and treatment centers and her meetings with doctors and nurses as part of her own campaign to highlight the "terrible toll the opioid epidemic is having on children and young mothers."

"My husband is here today because he cares deeply about what you're doing to help the millions of Americans affected by the opioid epidemic," she said.

It's difficult to get a complete and authoritative accounting of how much the federal government is spending to fight opioid abuse since it occurs across many programs, including Medicaid, which doesn't require annual funding approval from Congress, and dozens of other programs that do.

Experts say the amount probably is still not enough. Trump's proposed spending blueprint for the coming budget year includes $6.6 billion to curb illicit opioid use. The administration said that is $83 million more than the current year.

Trump signed legislation last fall that outlined steps to improve care and access to treatment. It allows nurse practitioners to prescribe addiction treatment medication, boosts incentives for people to get training in addiction medicine and allows Medicare to cover the use of methadone for opioid addiction.

Humphreys, who worked with lawmakers on the measure, said the parties couldn't agree on the fundamental question of how much money to throw at the problem, so instead they cobbled together the various small improvements they could agree on.

"And that's all good," Humphreys said. "But it's not transformative."

11Alive has done extensive reporting on the opioid epidemic and the impact it's having on metro Atlanta's suburbs.

Our team of digital investigators uncovered a startling 4000 percent increase in heroin-related deaths inside a geographic location identified as “The Triangle” in the wealthy suburbs of Atlanta.

That was the case at the time, but that area has grown.