"Surround yourself with people who love you and don’t read the statistics," Elise Roth Tedeschi said. 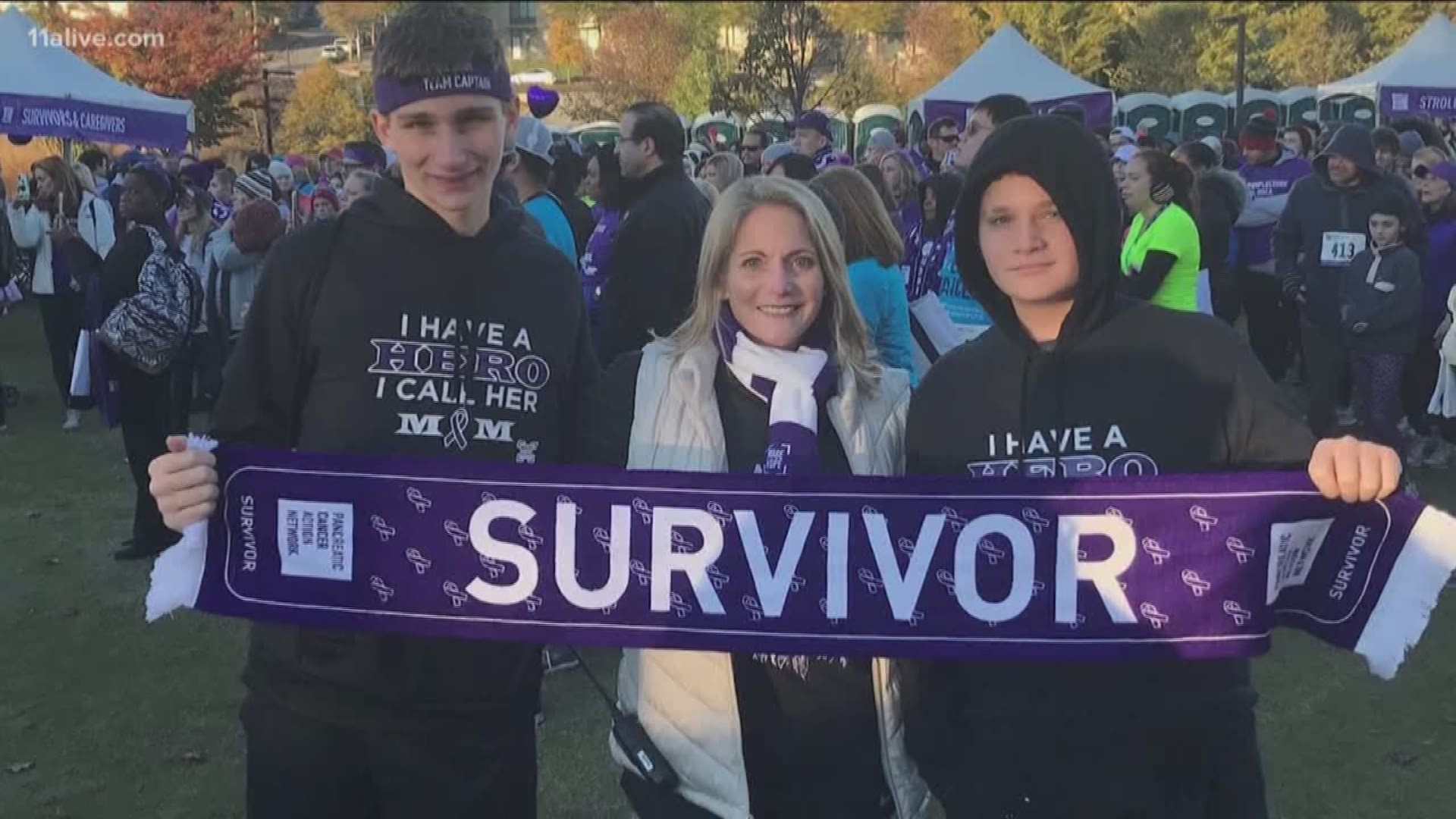 SMYRNA, Ga. — In 2012, Elise Roth Tedeschi was told she had about nine months to live. Almost seven years later, pancreatic cancer is in her rear view window – but not far from her mind.

“I get scans about every six months,” the mother of two from Smyrna said. “There’s just not enough survivors out there.”

Tedeschi had stage 4 pancreatic cancer and said that, even at her sickest moments, she reminded herself of the “four Fs:” Faith, family, friends and fun.

“Even in the midst of getting down to 89 pounds and getting really sick, there were times I still woke up incredibly joyful,” she said. “I remember telling my dad, ‘I’m so thankful for going through this.’ He thought I was crazy for saying that, but I felt as, though for me, faith was a huge piece of it.”

Tedeschi has two sons: Jake at Campbell High School and Ryan at Griffin Middle in the Cobb County School District. Jake was in second grade and Ryan was in kindergarten when she was diagnosed. Today, she is the “normal mother of teenage boys,” but she said it took a long time to get there.

“Honestly, during that time, I would think … if I had nine months to live, I was going to make those nine months great,” Tedeschi said. “I still worked. I really wanted normalcy in my life, and I took those small moments with my kids and made them important.”

Swim practices, football games and family activities continued, even as she lost her hair after 12 rounds of chemotherapy.

“There were times I was super weak. I really didn’t want to get up. But I forced myself to do that, because I wanted good memories (with my boys),” she said. “I tried to make it very normal. I never told them I thought I was going to die. It allowed them not to be fearful.”

She said that, when she shaved her head, her sons asked if they could see it. Her oldest son joked that “daddy looks better bald.” Her younger son told her she was beautiful with or without hair.

Now, she advocates for other local families with the disease as the Atlanta affiliate chair of the Pancreatic Cancer Action Network.

After Jeopardy! host Alex Trebek announced that he had stage 4 pancreatic cancer, Tedeschi wrote him an open letter about her experience, first published in the Daily Meal.

“I love Alex’s attitude. He just went out there and told people rather than news media hitting on it first,” Tedeschi said. “That’s really smart, and really brave. You have a little more control when you do that.”

After her diagnosis, Tedeschi also took control of her own story and wrote a letter to her family and friends a letter about her disease.

“I told people when I got diagnosed, and it was like, I would tell them over the phone and I would get a reaction that was super difficult … I would be talking to them and saying, ‘hey, don’t cry,’” Tedeschi recalled. “So I wrote a letter to my colleagues and friends and said, ‘here’s the deal. Don’t feel sorry for me. It is what it is.’ I hate it when people said they felt sorry for me.”

She said that having control over your own message and story can help people with cancer handle their own emotions – because telling someone you have cancer can be a heartbreak you feel over and over again.

For caregivers, Tedeschi said the most helpful thing was not to simply offer a hand of help – but to show up and give it without being asked.

“It’s so easy to say, when people ask, ‘what can I do for you?’ to say you’re okay. I loved the people who just helped and did things,” she said. “Some would call and say, ‘hey, have your kids ready in 30 minutes, I’ll pick them up and take them somewhere,’ or, ‘hey, I’ll be over with dinner.’ That stuff was great because they didn’t let me make the decision that I didn’t need any help.”

Six and a half years later, Tedeschi said her life is full of joy. She’s starting to write a book about her journey and is looking forward to PurpleStride 2019, which is happening at Chastain Park on Nov. 9, 2019. This year, the goal is to raise $385,000 to end pancreatic cancer.

And she hopes that Trebek feels her hope and faith on his journey as well.

Here is her open letter to Alex Trebek, first published in The Daily Meal.

"I was filled with fear, sadness and disbelief. I thought, “How is this even possible?” I was married to the love of my life for 11 years; I had two amazing boys, Jake (then 8) and Ryan (then 6); and a job that I absolutely loved. But my life, as I knew it, changed forever in an instant.

"So on January 6, 2012, the decision to fight was an easy one, because there was no way that I was leaving my little boys and no way that anyone else was going to marry my husband!

"Like you, Mr. Trebek, I had an outpouring of love and support (on a much, much, much smaller scale). I was astounded by the kindness and sheer beauty from friends and even complete strangers.

"My family became my prayer warriors, my caregivers and my security. My husband held down the home front; he would even carry me upstairs when I was too weak.

"My boys thought it was so funny, but I loved that they had this kind of role model — and I did think it was really romantic! My besties became my sons’ surrogate moms, taking them to swim practice and endless fun activities. The good far outweighed the bad.

"I ended up doing 12 rounds of chemotherapy, 25 rounds of stereo tactical radiation along with a 24/5 (24 hours a day, five days a week) chemo pump and then a cutting-edge surgery, called the IRE or NanoKnife. I also did some more post-surgery chemo.

"Guess what?! I beat the crap out of stage 4 pancreatic cancer and have been in in full remission for six and a half years.

"So Alex Trebek, go kick cancer’s butt — it has no chance against you! You got this!"

Elise Roth Tedeschi is the Atlanta affiliate chair of the Pancreatic Cancer Action Network. Learn more about the disease and give to PurpleStride to fight back and fund new research to save lives.