The protest is being organized by a group that argues taxes on tampons and other necessary women's health products constitute sex-based discrimination. 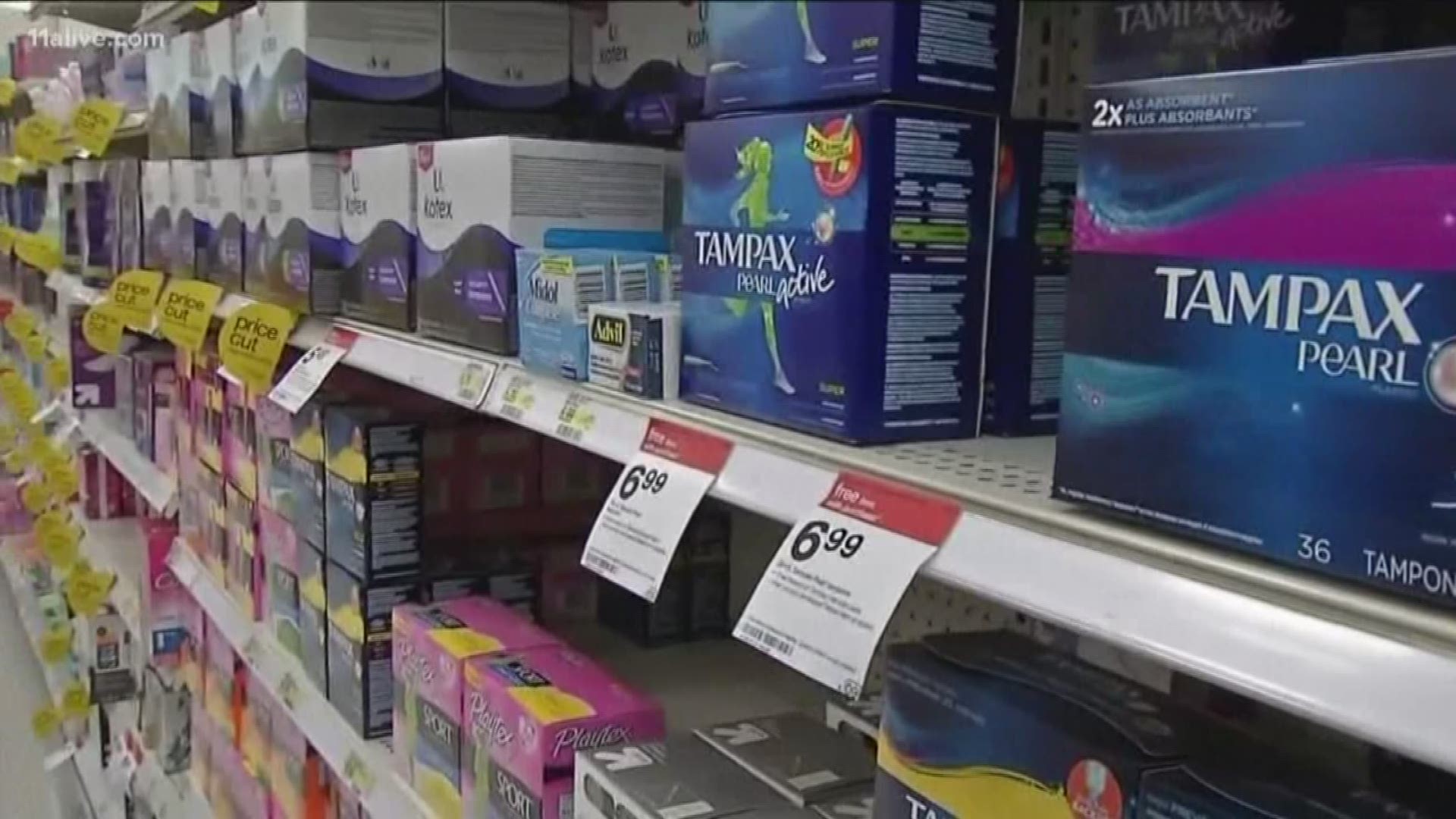 ATLANTA — A nationwide movement to end taxation on tampons that launched last week is targeting metro Atlanta on Tuesday.

The group Period Equity, which describes itself as “the nation’s first law and policy organization fighting for menstrual equity” and Lola, a company that makes tampons and other health products for women, are organizing the protest action.

Protest events for the “Tax Free. Period.” campaign will be held first in Douglasville, from 9 a.m.-3 p.m. at The Village at Chapel Hill, and then another is provisionally scheduled for downtown Atlanta from 4 p.m.-9 p.m. The second event is not yet confirmed by the group.

The movement against the so-called “pink tax” argues that where many states carve out sales or value-added tax exemptions for items considered necessities, few states extend that definition to tampons – a regulatory policy that constitutes sex-based discrimination, activists contend.

Period Equity is calling on women on Tuesday to bring a tampon or pad receipt and submit a tax reimbursement claim to the state Department of Revenue, “protesting the sales tax on your period product receipt as unconstitutional.”

"A sales tax on menstrual products is not just inequitable and unfair; it is sex-based discrimination in violation of the equal protection clauses of the state and federal constitutions, and is therefore unconstitutional and illegal," an event page states.

According to the group, Georgia collects nearly $10 million annually in tax revenue from the sales of tampons, pads, liners and other feminine hygiene products.

Georgia sales tax law makes a wide array of exemptions for services – everything from getting a tattoo to using a tanning bed to parking.

It does not, though, make very many exemptions for what might be considered consumer products – what the Official Code of Georgia Annotated terms “tangible personal property” – whether considered a necessity or otherwise.

It does carve out an exemption for sales of food for “off-premises consumption,” generally meaning groceries.

But practically the only example in the list of exemptions – as outlined in Georgia Code 48-8-3 – of a specific product an individual can buy tax-free in Georgia appears to be any mobility enhancing equipment prescribed to someone by a physician.

There are more than 100 exemptions in the Georgia Code, but the rest mostly relate to sales to and from specific types of organizations (tax-exempt groups and nonprofits) or for highly specific purposes (anything used for aquarium expansions, tickets to “nonrecurring sporting events” expected to generate over $50 million in the host city.)

The "Tax Free. Period." campaign also involves an organized letter-sending action to the 33 governors of states where tampons are taxed, including Georgia.

Similar protest actions have already been held in Austin, New Orleans and Nashville. One more is scheduled for Wednesday in Greenville, S.C.