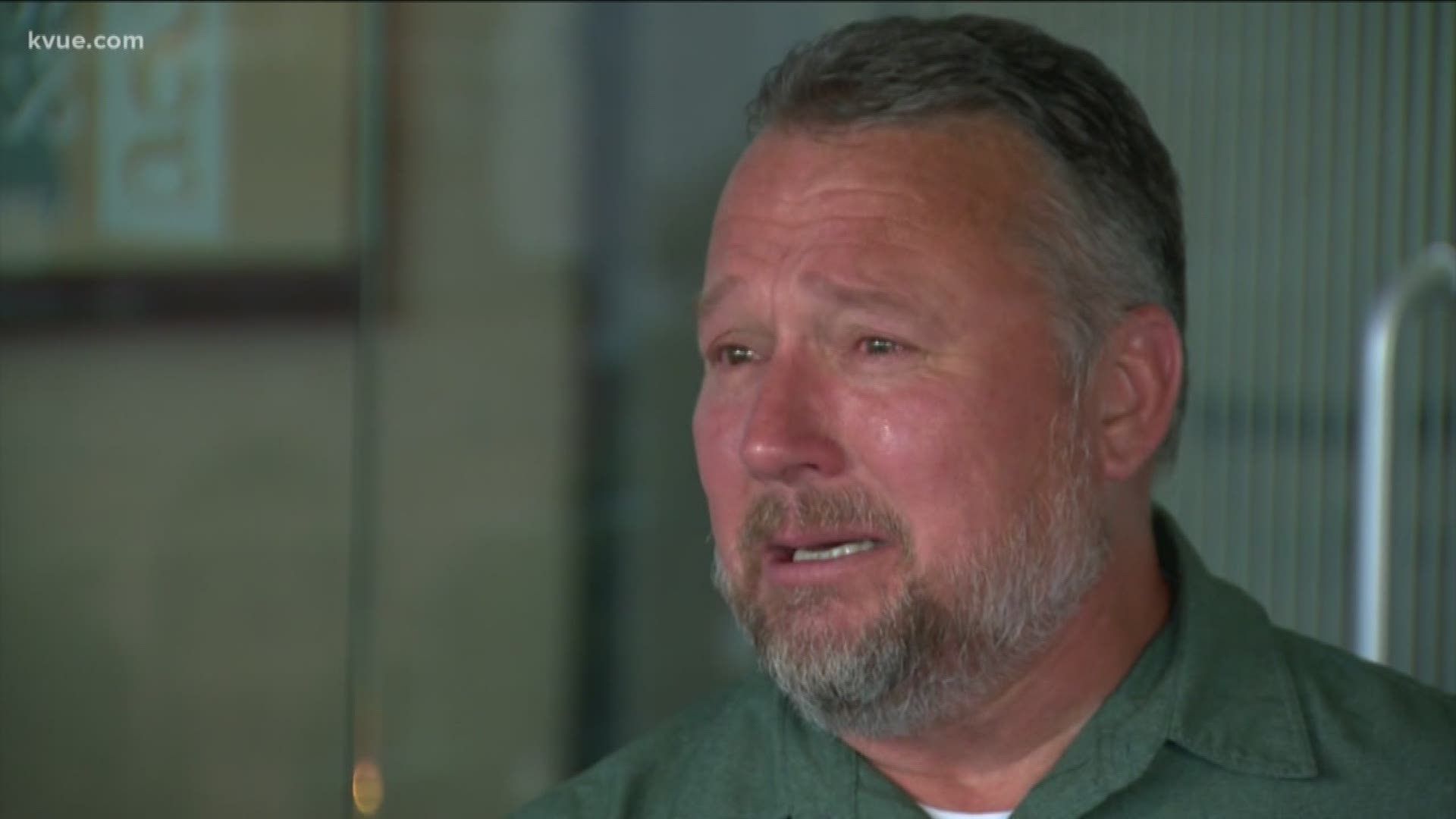 GEORGETOWN, Texas — For more than 20 years, Troy Mansfield was branded a "registered sex offender," a shameful asterisk by his name that followed him everywhere.

"I took my stepdad's name and I wanted it to be a good name," Mansfield said. "And I felt like somehow or another it got trashed by me, and I didn't mean for it to."

The father of two sons struggled to support his family from a cleaning business, purposely in his wife's name, Amy Mansfield.

"We lived between $16,000 and $19,000 a year, for a family of four – so very tight and very hard – because I'm trying to make a living but everywhere we go we get the door slammed on it because of this," Troy Mansfield said.

One of his worst days came when he was kicked out of his church.

"They came in that Sunday they said, 'We want y'all to get out. You haven't done anything wrong, we don't have a problem with you but public opinion is killing us in this church and you've got to leave,'" he said.

Credit: KVUE
Troy Mansfield was convicted of child sex abuse in September 1993. More than 20 years later, he no longer is required to register as a child sex offender.

But Williamson County prosecutors and a judge now agree Troy Mansfield should have never been a registered sex offender or convicted of a crime.

In the summer of 1992, a 4-year-old girl who lived in a duplex next door to Troy Mansfield in Round Rock had a play-date with his son.

Troy Mansfield, who was 25 at the time, remembers his wife being home while he played with the children.

Days later, police told him he had been accused of touching the girl inappropriately through her underwear.

The young father was stunned. He said he had played with both children by tossing them from two beds in his son's room. He flatly denies any inappropriate contact.

"I thought surely this is going to work out. There is no way that this can go any further than it is," Troy Mansfield said. "This is crazy. So I had hope that somehow or another the system would see the truth and this would be over."

PHOTOS: Mansfield with his family in the 1990s

But Williamson County prosecutors pushed hard, promising Troy Mansfield that if he went to trial, he would never see outside a prison cell. They offered several plea agreements that Troy Mansfield rejected. His case was set for trial six times.

"What do you do when you are 25 years old and a county like Williamson County comes after you and you don't have any money?" he said. "You can't hire an attorney. So, hard to fight."

In September 1993, on the night before jury selection started, Troy Mansfield agreed to a deal with 10 years probation. But he had to plead guilty.

The deal also required him to register as a sex offender.

The Mansfields spent the next two decades trying to live a normal life.
Then in 2014, an Austin attorney, Kristin Etter, agreed to review his case.

"Kristen had said to me, 'Ken Anderson was your DA,'" he remembered. "'Do you know what's going on in Williamson County?' And I said, 'No.'"

A Texas man named Michael Morton had been declared innocent in 2011 after 25 years in prison for his wife's murder. Prosecutors had evidence exonerating Morton: Morton's 3-year-old son told police he was home when the murder happened and that his father wasn't. But prosecutors never told Morton or his lawyers that information.

How Michael Morton's wrongful conviction has brought others justice

Troy Mansfield's attorney wondered if she might find something similar. She spent six months trying to get the DA's case files.

Prosecutors finally found the case files, and when they opened it, in plain view, they saw handwritten notes. It was evidence favorable to Troy Mansfield, yet never shared with his lawyers.

The first entries – early in the investigation – show prosecutors had doubts.
They wondered whether another child under a blanket with her may have done it.

"Little kids don't lie," the notes said. "Either she was coached or she had been molested earlier and the accidental touching reminded her."

Prosecutor notes from June, 1993 read: "Victim will be difficult to sponsor in court. She told me she does not remember what happened! At one point told me nothing happened."

RELATED: How a selfie saved a Williamson County man from 99 years in prison

Keith Hampton is an attorney in Austin working for the wrongly convicted.

"It is so factually well established a conviction was obtained through fraud, through prosecutorial misconduct, in the prosecutors' own handwriting," Hampton said.

District Attorney Anderson could not be reached for comment. Other prosecutors who handled the case denied wrongdoing.

Years later, in his 21st year as a registered sex offender, current prosecutors agreed Troy Mansfield was a victim of a grave injustice.

"Amy [Troy Mansfield's wife] and I just wept like babies that day thinking, 'Is this the beginning of the end of this nightmare that we've been through?'" Troy Mansfield said.

Credit: KVUE
Troy Mansfield and his wife said they "wept like babies" when they learned his conviction would be overturned.

Today, Troy Mansfield is no longer a convicted felon – no longer on a list with rapists or child molesters.

"And yet so angry that they would have that and destroy a man's life over what," he said.

Troy Mansfield now has a lawsuit against Williamson County, trying to right a wrong for two lost decades.

"There is no amount of money that anybody could ever pay me to give me back the 23 years that were stolen and the embarrassment that my wife and children had to go through," he said.

But there have been precious moments of moving forward.

Troy Mansfield will never forget the day he got to tell his stepfather, whose name he had taken as a teen, that the awful asterisk beside his name – their name – was finally gone.

Rodney Reed: His fight for a new trial and why prosecutors say he's guilty

Timeline: How did Rodney Reed end up on death row?