Diane Shields car is found in East Point—police make a grisly discovery in her trunk.

EAST POINT, Ga. -- Diane Shields left her office just after 5 p.m., but she still had not returned home after midnight, and worry gnaws at her sister and fiance.

As Henderson and Wilson are about to leave the scene, they get a call over their radios to be on the lookout for a subject who was picked up by a cab just before they discovered the body. They find the subject, 45-year-old Jay E. Roberts, of Hapeville, and arrest him with a charge of suspicion of murder.

East Point investigator, J.E. Hendrix, arrives on the scene where Diane’s body is still inside her trunk.

He observes the blue 1963 Chevrolet two-door hardtop Super Sports Impala parked in the driveway beside the building at the rear of the laundry mat, facing outward to Sylvan Road, with the passenger’s side of the car next to the building.

The trunk is wide open.

As he peers into the trunk, the investigator notices an opened cardboard box on the left side, with a Betty Crocker’s “New Dinner for Two” cookbook sitting on top. The cover illustrates a romantic, candle-lit dinner for two.

Between the box and a spare tire is Diane’s folded body—her left hand donning her shiny engagement ring.

She is on her back, face up, with her legs flexed at the hip and knees. Her thighs are folded up against her chest and her legs are crossed at her ankles.

And she has been brutally beaten and strangled.

It's a gruesome scene.

Credit: East Point Police Dept.
Diane Shields was found murdered in the trunk of her own car alongside an East Point dry cleaners.

The detective follows a small trail of semi-dried blood leading from the trunk to about eight feet from the rear of the car on the asphalt.

The hood is open, and he touches the radiator. It is cool to the touch.

Diane’s body is removed from the trunk.

They stretch out her body into a lying position and place her on the gurney on her back.

She is fully dressed, wearing an olive-green jumper-type dress and a white top with olive-green trim on top and pantyhose—but barefoot.

Blood that once oozed down the side of her chin, now stains her mouth with a deep red. And a piece of cloth that once likely soaked up the blood, saliva and screams just hours earlier, is left protruding from her mouth.

Hendrix takes her temperature and she is 89 degrees.

After Jones and Rickerson take photos of the scene, her body is taken to the Fulton County Morgue for further observation.

Sgt. J.E. Hendricks, with the Fulton County Medical Examiner’s Office determines that she has been dead for about four hours. 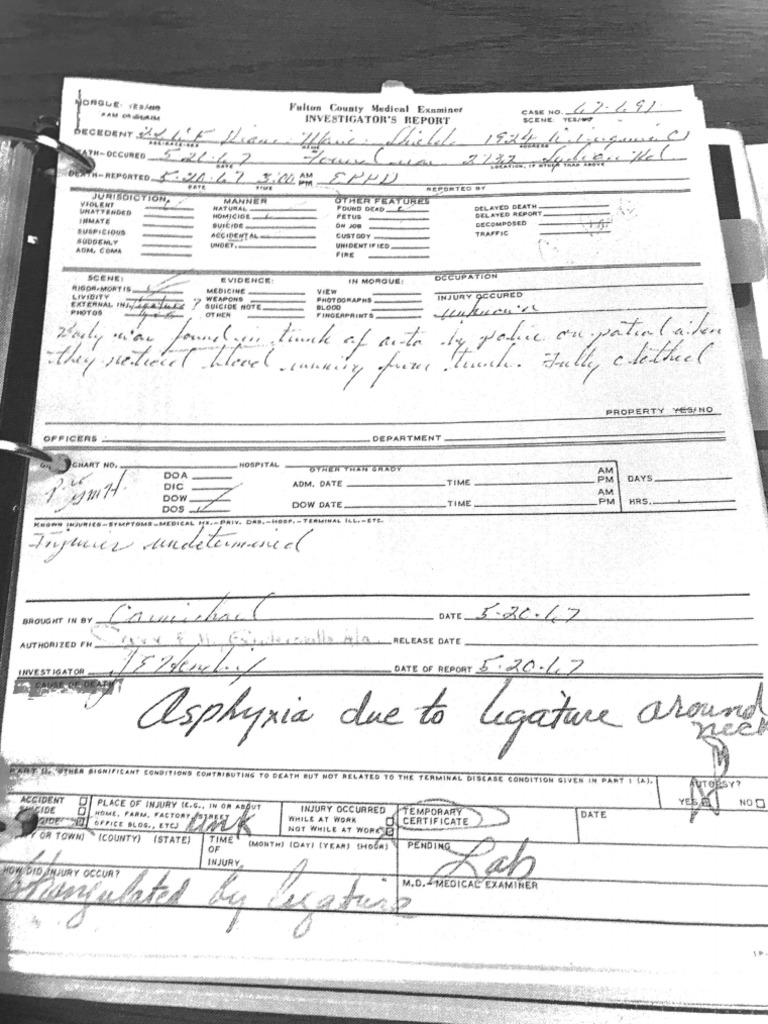 The medical examiner reports her cause of death as strangulation, or asphyxia due to ligature, caused by a phone wire or venetian blind cord placed around her neck and squeezed tightly.

Further, he notes that a paper towel and a head scarf are shoved in her mouth and down her throat—and her left ear is severely torn.

There’s a knock on Fleming's door.

It is the College Park Police.

As Diane's fiance answers the door, the officers begin peppering him and her sister with questions.

The officers take them to the police department and give them the news.