Four years after his elderly parents' brutal murders, their son believes it's time to talk and hopefully break someone else's silence, uncovering a clue into who killed Russell and Shirley Dermond. 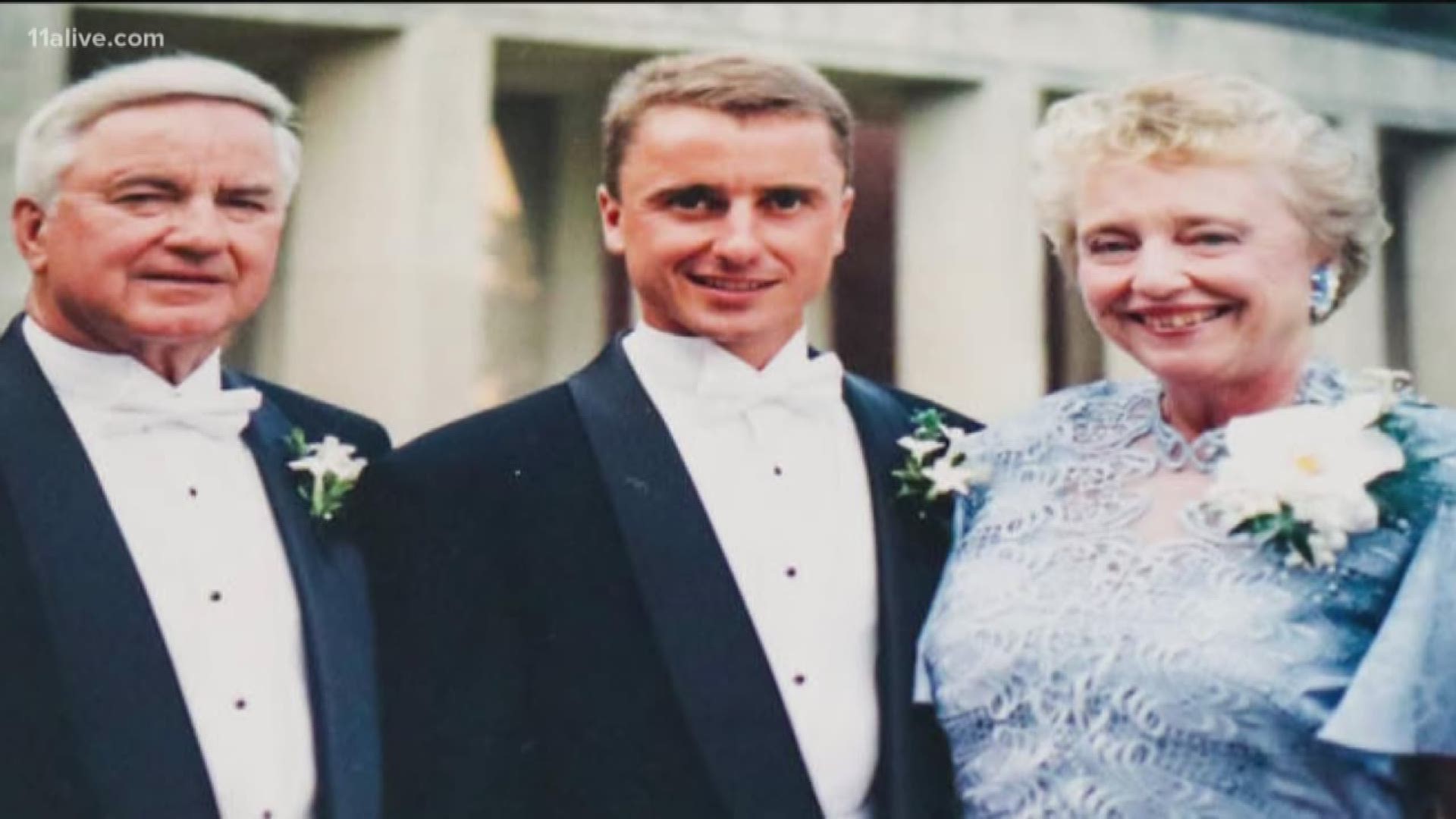 SANTA ROSA BEACH, Fla. – Brad Dermond flips through albums and shuffles through a handful of photographs—remembering family road trips, golfing and how much his parents loved him and his siblings and adored their grandchildren.

But the memories are bittersweet, because that is all that remains. That, and unanswered questions.

The youngest of four, 55-year-old Dermond, says his parents were very private people and that they would hate that he is talking about them at all.

But four years after their brutal murders, Russell and Shirley Dermond's son believes it’s time to talk and hopefully break someone else’s silence, uncovering a clue into who killed his parents in rural Putnam County, Ga.

“[In] that stage in life, you prepare for that call at any time, but not that type of call,” Brad said in his Santa Rosa Beach, Fla., home this week.

Brad Dermond looks at years' worth of memories with his parents, Shirley and Russell Dermond. (Jessica Noll / WXIA)

Russell, 88, was found decapitated inside his garage on May 6, 2014, and two fishermen discovered 87-year-old Shirley’s body 10 days later in Lake Oconee, about five miles from their lakefront home.

The Dermonds owned a house, above, on Lake Oconee. (Jessica Noll / WXIA)

Together, they had three sons and a daughter—and eventually, they would dote on nine grandchildren too.

“Both her and dad, total family people. Their favorite time was to spend time with the family and grandkids,” Brad said about his parents, who were both only children, themselves.

In fact, the grandchildren would go to Lake Oconee for summer camp and spend time with Shirley and Russell every year.

“[They were] just the most wonderful people you’d ever want to meet,” Brad gushed.

Brad Dermond cherishes photos, like above, with his mom, Shirley Dermond. (Provided)

Both were very religious, and Shirley was an avid writer, artist and crossword puzzle enthusiast. Russell was a thoughtful businessman, disciplinarian and Brad’s favorite golfing partner, according to their son.

After several years in the fast food industry, in which Russell owned several Hardees restaurants in Atlanta, he retired in 1994.

The couple moved to Eatonton, Ga., and built their million-dollar Reynolds Plantation's Great Waters home in a cul-de-sac, overlooking Lake Oconee. It was wooded and very private.

Married nearly 64 years, the couple did everything together—including taking their last breaths.

What happened on Lake Oconee?

The last time Russell was seen alive was on Thursday, May 1, 2014 when he ran some errands in town.

According to store and bank surveillance videos, obtained only by 11Alive, Russell transferred money from the drive-thru lane at the Lake Oconee branch of the Peoples Bank at 2:15 p.m. He then traveled to the nearby Publix, at 2:26 p.m., to pick up a prescription for Shirley, for an upcoming cataract surgery—as well as a loaf of bread and a few cucumbers.

In the video, he can be seen wearing dark glasses, khaki shorts, a green polo shirt and dark gym shoes–the same clothes police found in his bedroom when they searched the Dermonds’ residence after his murder.

Later that evening, before dinner, Brad spoke to his parents on the phone. Like most days, he said, they just chatted about how their day went with each other.

The couple was supposed to attend a Kentucky Derby party that weekend, but never showed. After growing concerned, a neighbor checked in on the Dermonds on Tuesday, May 6.

Police discovered Russell’s headless body in the garage in between the couple’s two cars.

According to Putnam County Sheriff Howard Sills, there were no signs of forced entry or indications of a struggle in the home. Nothing was out of place—jewelry and medications were seemingly as the Dermonds had left them. 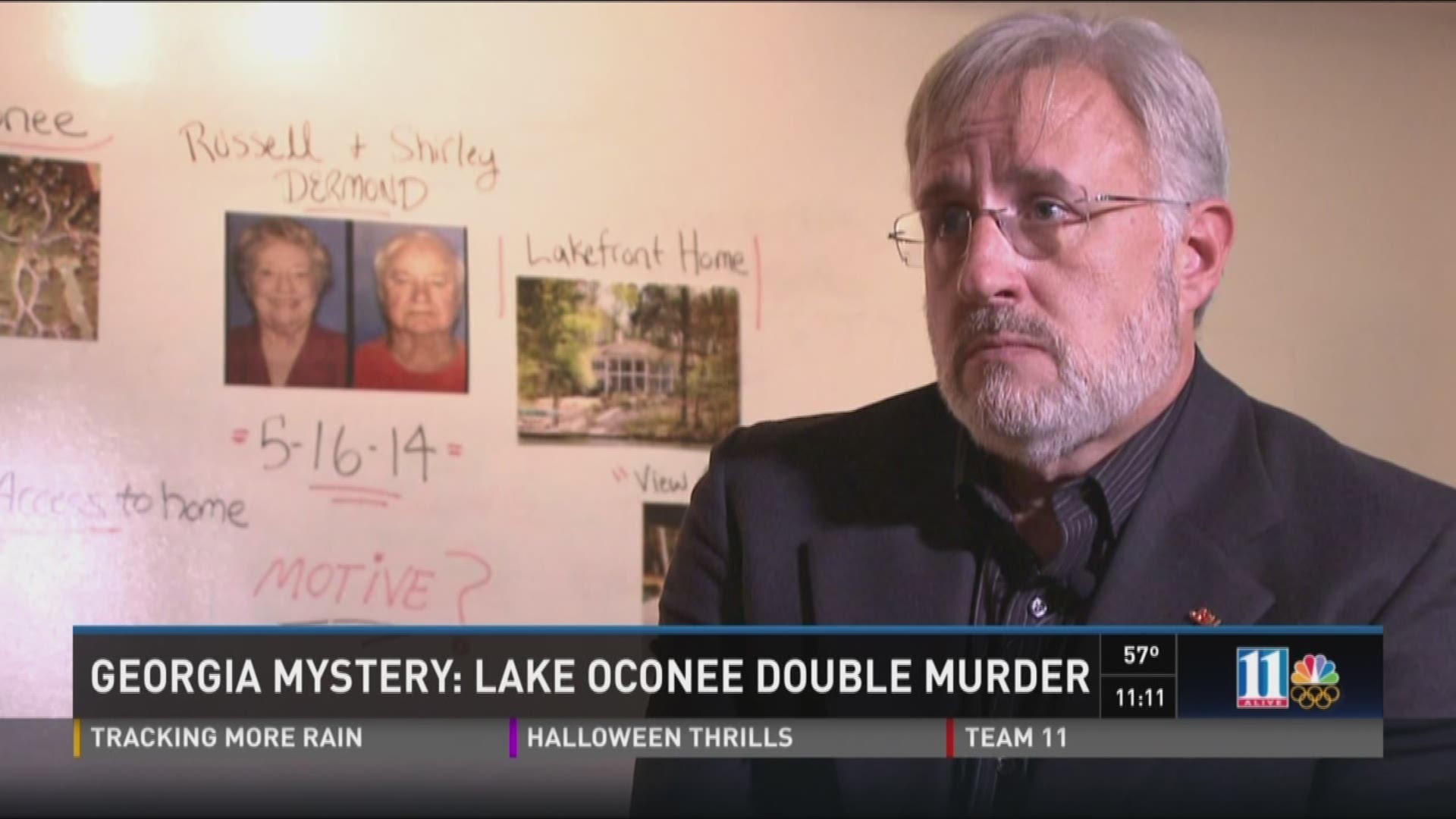 Sills narrowed the timeframe of Russell’s murder to somewhere between 4:30 p.m., on May 1—when the mail was delivered—to 6 p.m., on May 4, when the couple failed to show up for the party.

“They don’t even know how he was murdered, because we don’t have his head,” a frustrated Brad said about his father’s brutal death.

Brad was at his son’s baseball game when he got the worst call of his life.

“We got the call from my brother-in law, and he was a total mess. [I] almost couldn’t even decipher what he was talking about,” he said.

His brother-in-law put his son on the phone to relay the horrific news.

“He said, 'Grandpa had been murdered; grandma was missing.'”

Shirley’s phone and purse were still in the house.

Crews searched for several days with no luck.

On May 16, two fishermen on Lake Oconee found her body near a dam.

She has been bludgeoned to death and her body had been weighted down with cinder blocks.

The mystery of who and why remain.

However, one thing is known.

When Russell’s body was found in the couple’s garage, his finger had a severe wound, Sills said. Tangled within his blood, they found strands of Shirley’s hair.

“It would appear that there was a struggle and dad was trying to be protective of mom,” Brad surmised.

It's difficult for their son to fathom their last moments alive.

“At what point would you just have that sinking feeling, this is it?” he said. “It’s the horror that they must have gone through, from the beginning until it was finished... that’s what’s difficult to overcome.”

Held up by push pins, the Dermonds' unsolved murder poster is faded, but remains on the Putnam County Sheriff's bulletin board as soon as you walk inside. (Jessica Noll / WXIA)

Brad, who still talks to his golfing buddy nearly every day, has dreams about his dad as well. He said, Russell comes to him in his dreams, offering him clues about his death. But he wakes up before it leads anywhere. And, he’s left at a loss all over again—perplexed, because his parents, he said, had no dark side or secrets that would have resulted in their murders.

“It’s not clear but there’s been a couple... where I almost feel like he’s got some answers and he’s trying to get me to see something, read something, that hasn’t happened.”

“It just always ends up with a big question mark,” he said.

These days, he relies on the FBI, Sills and the public to come forward and shed light on who did this to his family.

Brad Dermond, center, with his parents at his wedding. (Provided)

“We may not like how long it takes, but it will be solved,” Brad said with optimism. “When you start involving more and more people, it increases the chances of information being shared. And that’s the information we’re looking for.”

Sills has chased down leads across the country, but still nothing to solve the case.

But, he is convinced more than one person was involved.

“There's no way one person did this," he said. "I’m not going to say it’s absolutely physically impossible, but it’s highly unlikely."

Sills believes that Dermond was decapitated after he was murdered in an attempt to hide evidence, such as a gunshot wound and bullet.

The biggest roadblock is motive. There is none.

But Brad is confident in Sills’ ability to solve the only two homicides of his career that have gone cold.

“If there’s somebody who’s going to get this thing solved, it’s going to be him.”

►FLASHBACK: Sheriff: Beheading is most frustrating homicide in his career◄

►Justice for Love: A mother’s relentless pursuit to find her daughter’s killer

Gone Cold is an ongoing series, where 11Alive Journalist Jessica Noll investigates some of the most infamous and lesser-known cold cases in Georgia. She's digging for answers for the still-grieving families who long for them, and for the victims who have never found their justice.