HATE CRIME | Can a feeling also be considered a crime?

Several cases out of Georgia that could be considered hate crimes were never reported as such. When asked why, law enforcement responses embodied the same answer: There's no hate crime laws. 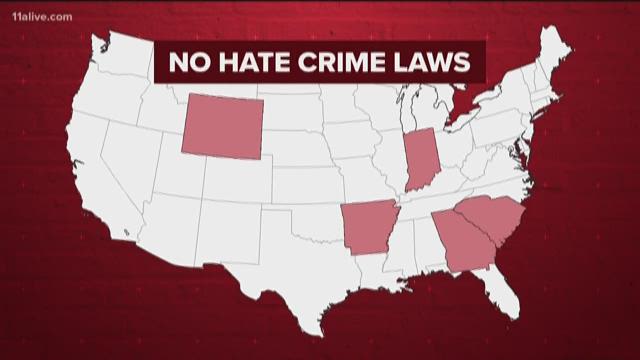 Hate is a feeling, but is it also a crime?

Three bills are being debated that could help truly define what a hate crime is and help law enforcement better understand when they need to report it.

One bill was introduced in the Senate and two in the House. None of the bills have made it out of committee and cross over is quickly approaching.

Research from the Department of Justice shows law enforcement reports about 6,000 hate related crimes every year, but according to victims that were surveyed by the same agency, there are more than 250,000 hate crimes that happen each year.

Why are the numbers so different?

Well, most law enforcement have no protocol to follow when it comes to reporting hate crimes.

Out of the 39 hate crimes that were reported in Georgia last year, 25 of them were from Cobb County and that’s only because Cobb is one of the few agencies that track and report hate crimes.

Several cases out of Georgia that could be considered hate crimes were never reported as such. When asked why, their responses embodied the same answer: There’s no hate crime law.

Agencies that did report hate crimes in 2016:

Metro law enforcement agencies that either do NOT track or reported zero hate crimes:

Corporal Doug Rainwater with the Forsyth County Sheriff's Office admits from 2010-2016 the agency did not consistently track hate crimes. An open records request by ProPublica, a nonprofit journalism organization, revealed 30 hate crimes in that time period, four of them from 2016. But according to FBI data, none were reported.

Rainwater says when Sheriff Freeman took over in January 2017, the policy was made clear: hate crimes would be tracked and reported. In that year, two hate crimes were recorded.

In 2015, Douglasville Police investigated a prominent case considered by many a hate crime.

Jose Torres and Kayla Norton, along with many others, were part of a group called, ‘Respect The Flag’ - which organized rides and flag sales to show support for the Confederate battle flag.

For two days, the group gathered to travel around Paulding and Douglas counties, terrorizing those that disagreed with their message.

When one of the trucks got a flat tire, they stopped next to a home hosting a birthday party – filled with African-American children and their parents. As soon as attendees tried to figure out what was going on, they say the racial slurs and even death threats began.

This incident came just days after the massacre in Charleston, when nine African-Americans were killed.

The defense hoped to dispute the claim someone pulled out a gun, but Facebook messages obtained by prosecutors revealed at least one group members trying to cover it up.

While many in the group claimed they were about history, not hate, other Facebook messages revealed conversations about upcoming KKK meetings and showed support for white supremacy groups.

11Alive obtained thousands of pages of messages through an open records request after the trial. (Some of the messages had text highlighted and are displayed how we received them.)

Member 1: Hey, there is a Klan Rally in Temple Saturday.

Member 1: You can ride with me.

Member 2: This is true lol. Alright then sounds good.

Member 2: Awesome man thanks. I'm finally getting my life back in order so I can be alot more active in this movement.

Member 1: That is awesome!! Our people need us and you'll be safe there nobody f***s with Crew 38 or Hammerskins.

Member 2: Hell yeah man but me not being a skin wouldn't b a problem?

Member 1: No they'll know your with me. Skinhead ain't a haircut it's a way of life.

Member 2: Right I know that. I just need to hang out with skins to learn more.

Norton: Ok do not say anything about us pulling guns. The guns never left the vehicle they were in

The Douglas County judge sentenced Torres to 20 years in prison with 13 to serve and Norton with 15 years, six to serve.

Melissa Alford, whose son and grandson were sharing a birthday the day of the incident, said she could feel the hate.

The messages were enough for the district attorney to convict several of the members for street gang terrorism but not for a hate crime.

Alford says it’s time to call it what it is – a hate crime.

1 / 8
A metro Atlanta couple will be spending years behind prison bars after they were convicted of yelling racial slurs at a group of people celebrating a child's birthday party. Victims look on as the sentences are read.(WXIA)