A Metro-Atlanta landscape company owner refuses to work with a gay couple, citing religious beliefs. Georgia and about 30 other states do not have any laws specifically prohibiting LGBTQ discrimination. 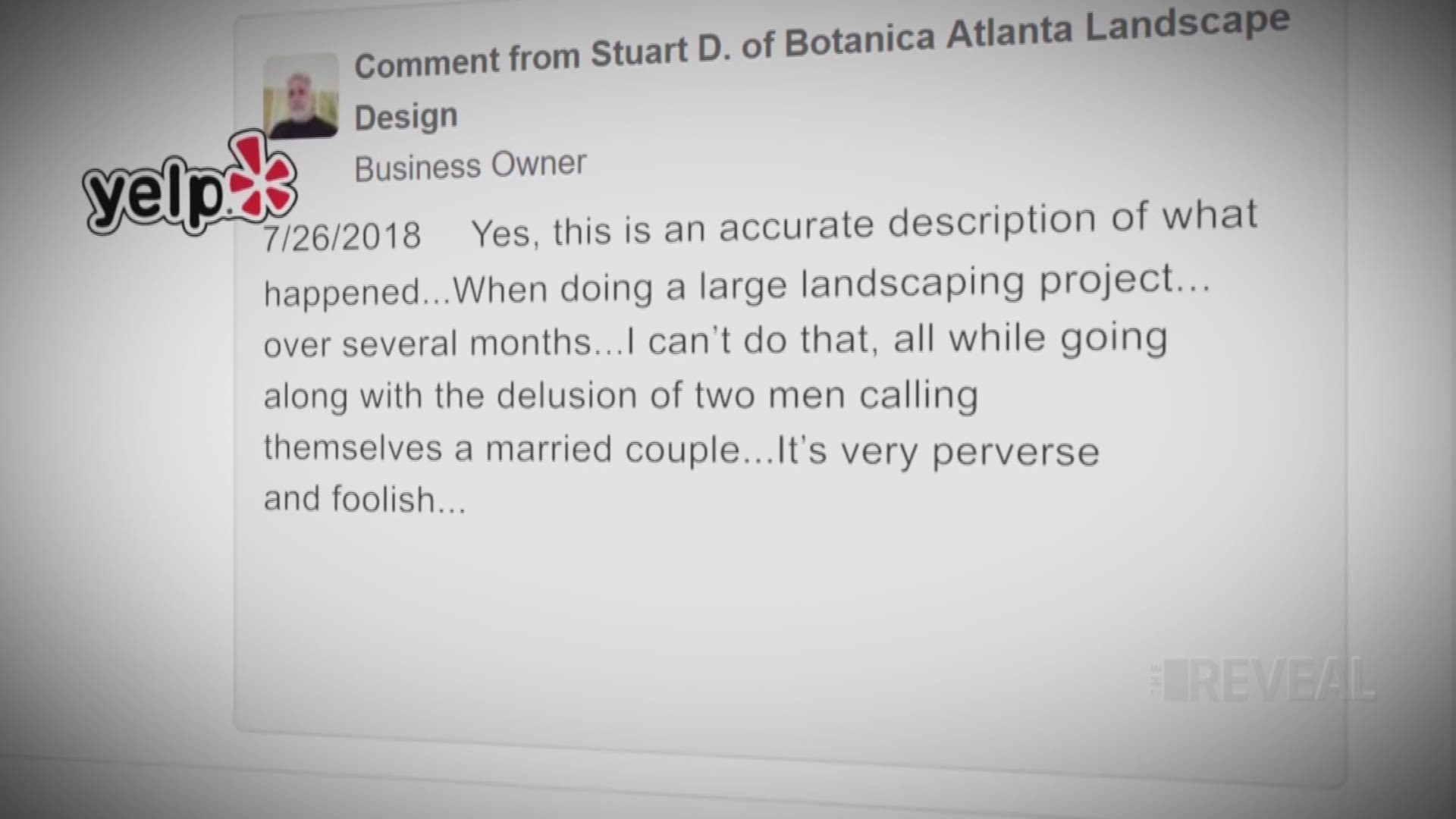 When Colton Southworth and his partner moved into their metro Atlanta home this summer, they had big dreams to transform their yard into a garden oasis.

They also plan to expand their backyard, which requires cutting down trees and major excavations

“Coming from a commercial landscape business, this would be a dream job, in my opinion, if you got called to bid on it,” said Southworth, a North Carolina transplant.

While searching online, he and his husband found Botanica Atlanta Landscape and Design through a website called Houzz.com, a company which connects consumers with home professionals.

They were impressed with the pictures on the website, so they called the owner, Stuart DiNenno.

Over the phone, Southworth explained the scope of the landscaping project to DiNenno. Instead of asking about specific details, DiNenno, questioned Southworth about his marital status.

“He asked me if the project was for myself and my wife, and I said ‘no, it’s for myself and my husband.’ And he said that he would not interested in working with us. At that time, I responded, ‘OK,' and hung up the phone,’” Southworth said.

“I was a little taken back because no one has ever said that to me,” said Southworth. “This was the first time that myself and my partner were inclusively discriminated against based on our relationship.”

Southworth posted this two-sentence Yelp review about the call: “Contacted today about a very large project in Sandy Springs. The owner asked if the work was for me and my wife, I said no me and my husband and he replied that he wouldn't be interested in working with us.”

A few days later, DiNenno responded to Colton’s review. “Yes, this is an accurate description of what happened,” wrote DiNenno. “Large landscaping projects take several months," he said, adding ,“I can’t do that, all while going along with the delusion of two men calling themselves a married couple…It’s very perverse and foolish."

According to DiNenno, his landscaping business focuses on large projects that often exceed $20,000. DiNenno's rant didn't end there. He also posted about their interaction on his personal Facebook page: “I average about one or two calls per year from sodomites or lesbians. I always turn them down,” wrote DinNenno.

DiNenno declined multiple interview requests with 11Alive, but over the phone explained he doesn't believe in same-sex marriage. According to his Christian beliefs, he thinks homosexuality is a punishable offense by death.

Jeff Graham is the Executive Director of Georgia Equality, a LGBTQ advocacy organization. “Frankly, this is one of the most blatant that we’ve seen,” said Graham.

Earlier this year, Gay & Lesbian Alliance Against Defamation (GLAAD) released results of a national survey it conducted about LGBTQ discrimination.

For the first time in four years, it found a significant increase in LGBTQ people reporting discrimination.

“Consistent with this reported erosion in comfort and acceptance among non-LGBTQ Americans, there was a significant increase year over year in percent of LGBTQ community members who have reported having experienced discrimination based on gender identity or sexual orientation,” explained the report.

According to the National Coalition of Anti-Violence Programs, a 2017 study it conducted identified “52 hate related homicides of LGBTQ people” in 2017 – “the highest number ever recorded” by the organization.

“We’re in a real significant period of change. Yes, we can get married and our relationships are respected and protected in the law just like anyone else, but unfortunately there’s been a backlash to that, there’s people that just refuse to recognize that change,” said Graham.

Despite his explanation, the landscape business owner didn’t break any laws when he refused to work with Southworth and his husband. That’s because Georgia and about 30 other states, have no law specifically prohibiting LGBTQ discrimination. That means it’s completely legal to fire or refuse to serve someone based on their sexual orientation in Georgia and other states.

Cities can pass their own ordinances specifically prohibiting LGBTQ discrimination. According to Graham, Atlanta is the only city in Georgia with one. It’s unclear if the ordinance applies to DiNenno because he operates his business out of his Chamblee home. Southworth also lives out of Atlanta’s city limits.

“It is not right that some folks depending on where they live are protected against discrimination, but if they travel someplace else like the state of Georgia to do business or to visit or frankly to relocate, they’re not going to be protected,” said Graham.

How does this case relate to the June 2018 supreme court case involving the Colorado cake maker?