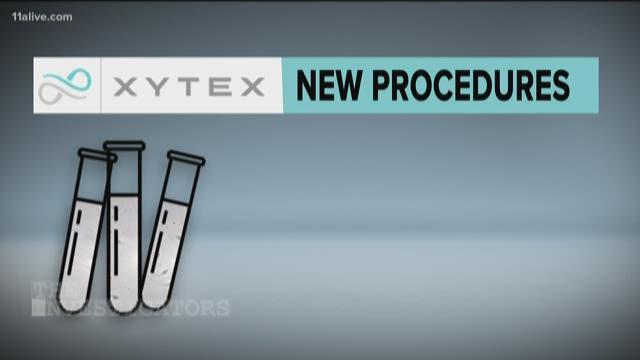 Nearly a dozen lawsuits were filed by families fighting for reform within the sperm bank industry, but just weeks before the start of the first trial in Florida, the families agreed to settle out of court.

The lawsuits filed claimed Xytex failed to properly vet donor 9623, who according to documents obtained by the Investigators, donated sperm for nearly 14 years. There were gaps in his donations, but in an interview sold to prospective parents trying to choose a donor, the company expressed no concerns.

“There have been long stretches where you have not come in. You have been busy with school,” a woman says in the recording.

But according to court records, it wasn’t school, but jail on a burglary charge that kept him away. Donor 9623 also spent time in and out of mental hospitals. Xytex seemed clueless.

“You just don’t know how I appreciate people like yourself spending the time out of your very busy day to come in here, because you are what makes Xytex and other banks above average,” the Xytex representative is heard saying to donor 9623 in the recording.

Xytex tried to get the lawsuits dismissed, but federal courts in Florida and California allowed the cases to move forward. In his order, Judge William Alsup wrote, “If Xytex had screened Donor 9623 as carefully as claimed… he likely would have been rejected. Xytex surely knew that it failed to screen up to the standard it advertised.”

Angie Collins is one of the mothers that filed a lawsuit against Xytex and continues to fight for reforms both in the US and Canada.

“The public needs to know the truth behind the business,” she said.

Collins can’t discuss the details of the settlement, but says it will improve safety for other parents and their donor offspring.

Xytex has never talked publicly about what happened and did not return phone calls from 11Alive even after the cases were settled. But investigator Rebecca Lindstrom has learned the company now runs a criminal background check on new donors.

Collins believes the background check should be done annually. Donor 9623 had been donating sperm for several years when he was arrested for breaking into someone’s house to steal music equipment. A customer service agent explained to Lindstrom by phone that a felony conviction would be an automatic disqualifier, but she had no idea what would happen if the donor was sentenced under a first offender program like Georgia’s.

Xytex now tells potential customers it verifies a donor’s education claims. Donor 9623 claimed to be working toward a Ph.D. at the University of Georgia, when at the time, he’d yet to earn a bachelor. According to school records, he wasn’t even enrolled when he donated the sperm Collins purchased.

The settlement only impacts Xytex. There is still no industry requirement to verify the accuracy of a donor’s application. That’s why Wendy Kramer, a mother in Colorado, petitioned the FDA to take another look at the rules. Nearly 200 donor-conceived children, parents and scientists wrote in support of the petition, accusing the government of giving birth to a deeply flawed industry.

While Canada has agreed to take another look at its rules around sperm donations and the screening process for potential donors, the FDA which regulates the industry in the United States, has put any such review on an indefinite hold.