Drunk driving arrests are down sharply after decades of aggressive enforcement while drugged driving arrests are climbing. That's why Georgia has more than 250 officers with special 'Drug Recognition Expert' training. But the 11Alive Investigators discovered those 'experts' sometimes put innocent people behind bars. 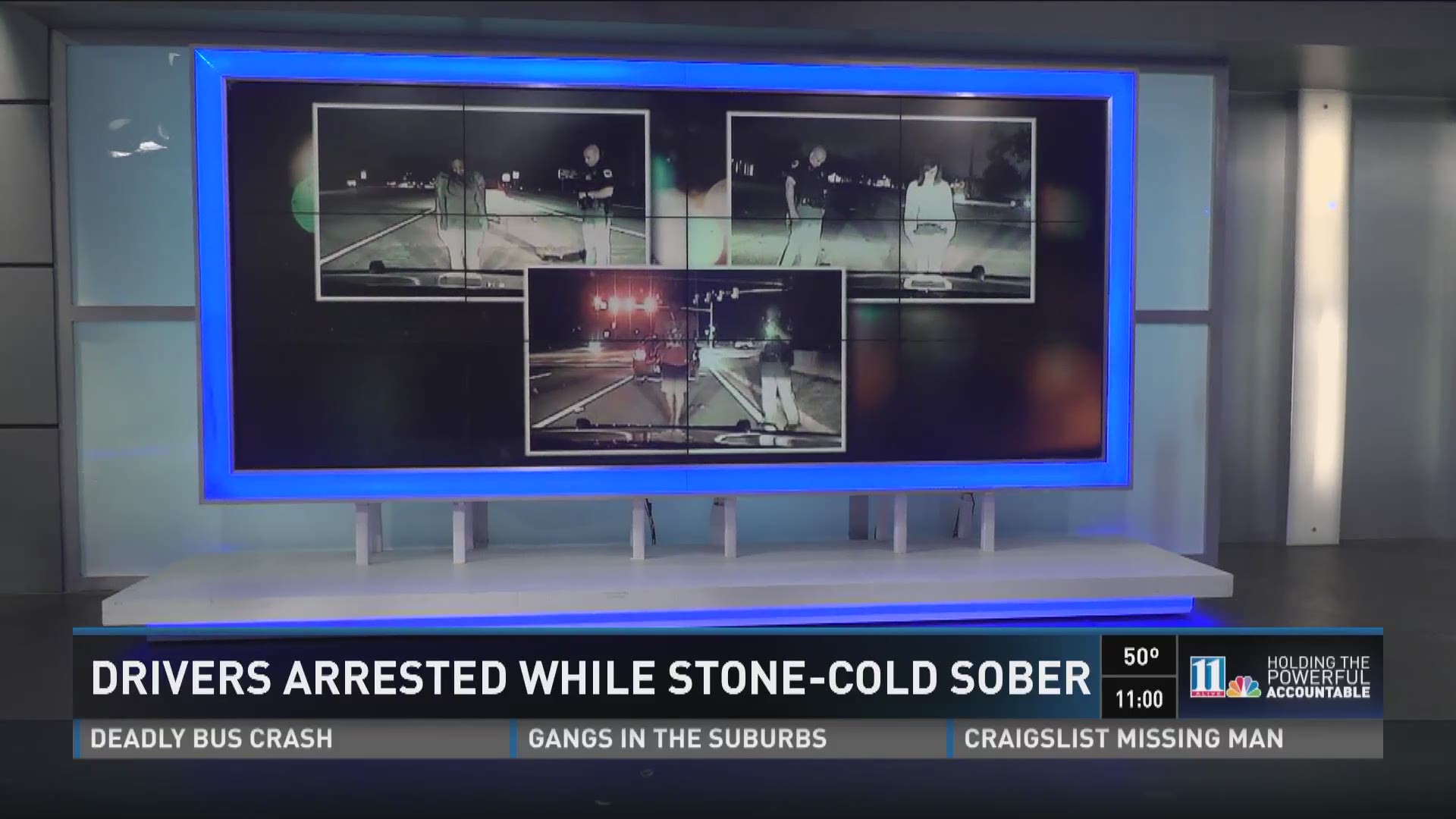 But 11Alive News Chief Investigator Brendan Keefe discovered some drivers are getting arrested for driving stoned -- even when their drug tests came back clean.

Katelyn Ebner was arrested after she left her job as a server at a bar in Cobb County.

Cobb County Police Officer T.T. Carroll: "You said you haven't had anything to drink tonight?"

Katelyn Ebner: "Not tonight, no."

Officer Carroll: "Not tonight, okay. One of the things we do is we ask people to blow through this thing, okay."

Katelyn Ebner crossed the center line, and got pulled over on the way home from work. She works in a bar, and does not drink while at work.

Officer Carroll: "Blow real hard, blow 'til I ask you to stop -- keep going, keep going -- you can stop. Okay."

No, she had not been drinking. All tests for alcohol came up empty. But the Cobb County police officer who pulled her over was not done yet.

Officer Carroll: "I'm going to ask you a question, okay? When was the last time you smoked marijuana?"

Katelyn Ebner: "Oh, I don't do that. I can give you a drug test right now."

Officer Carroll: "Okay. Well, you're showing me indicators that you have been smoking marijuana, okay?"

"I didn't realize that you could get arrested for something that you didn't do," Ebner told Keefe. "That never crossed my mind until it happened to me."

Officer Carroll: "Watch your wrists for me, I don't want to pinch you."

Officer Carroll: "No, ma'am -- not possession, unless I find any in your car. I believe you're impaired by the marijuana you've smoked."

Katelyn Ebner: "Okay, so when I do a drug test, I'll be free to go, correct?"

Officer Carroll: "You're going to jail, ma'am. Okay? I don't have a magical drug test that I can give you right now." 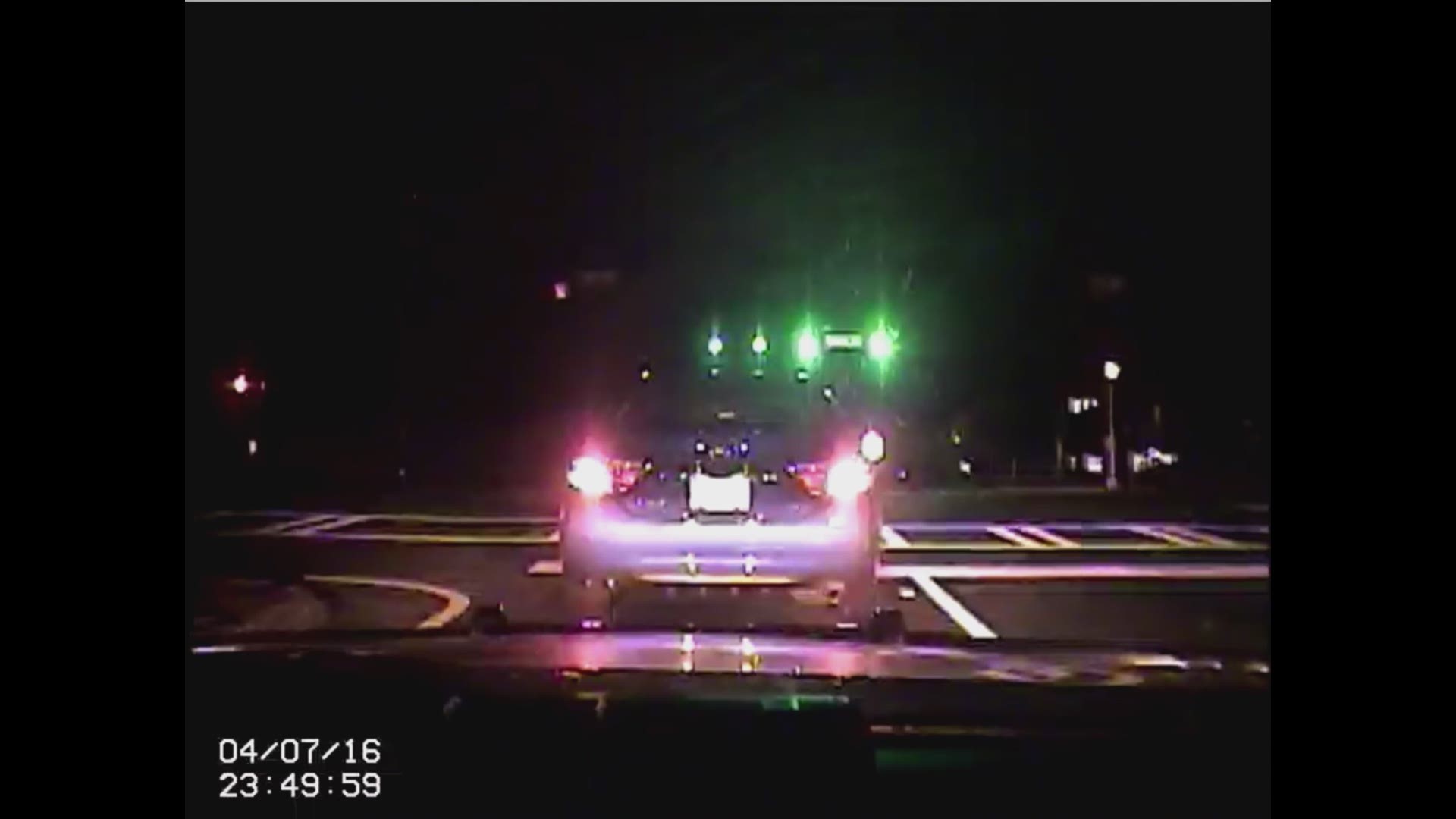 "Before you felt the handcuffs closing over your wrist, did you understand just how serious this was?" Keefe asked Ebner.

"I didn't understand," Ebner said. "As soon as I took that breathalyzer, I thought I was going home."

The waitress spent the night in jail, had her alcohol server's permit revoked because of the arrest. After four months, prosecutors dismissed all her charges -- because the blood test came back completely clean.

Nursing student Princess Mbamara was arrested by Cobb County Police Officer T.T. Carroll because he believed she was under the influence of marijuana

"You had to spend months -- and thousands of dollars -- proving your innocence," Keefe said.

Princess Mbamara: "No. Not at all."

Officer Carroll: "Just one second -- Just give me one second."

Princess Mbamara: "You're arresting me!?"

Princess Mbamara: "You're arresting me because you think I smoke marijuana?"

Officer Carroll: "I think you're impaired by cannabis, yes, ma'am."

Princess Mbamara: "Sir, I don't smoke weed! Is there a way you can test me right now?" 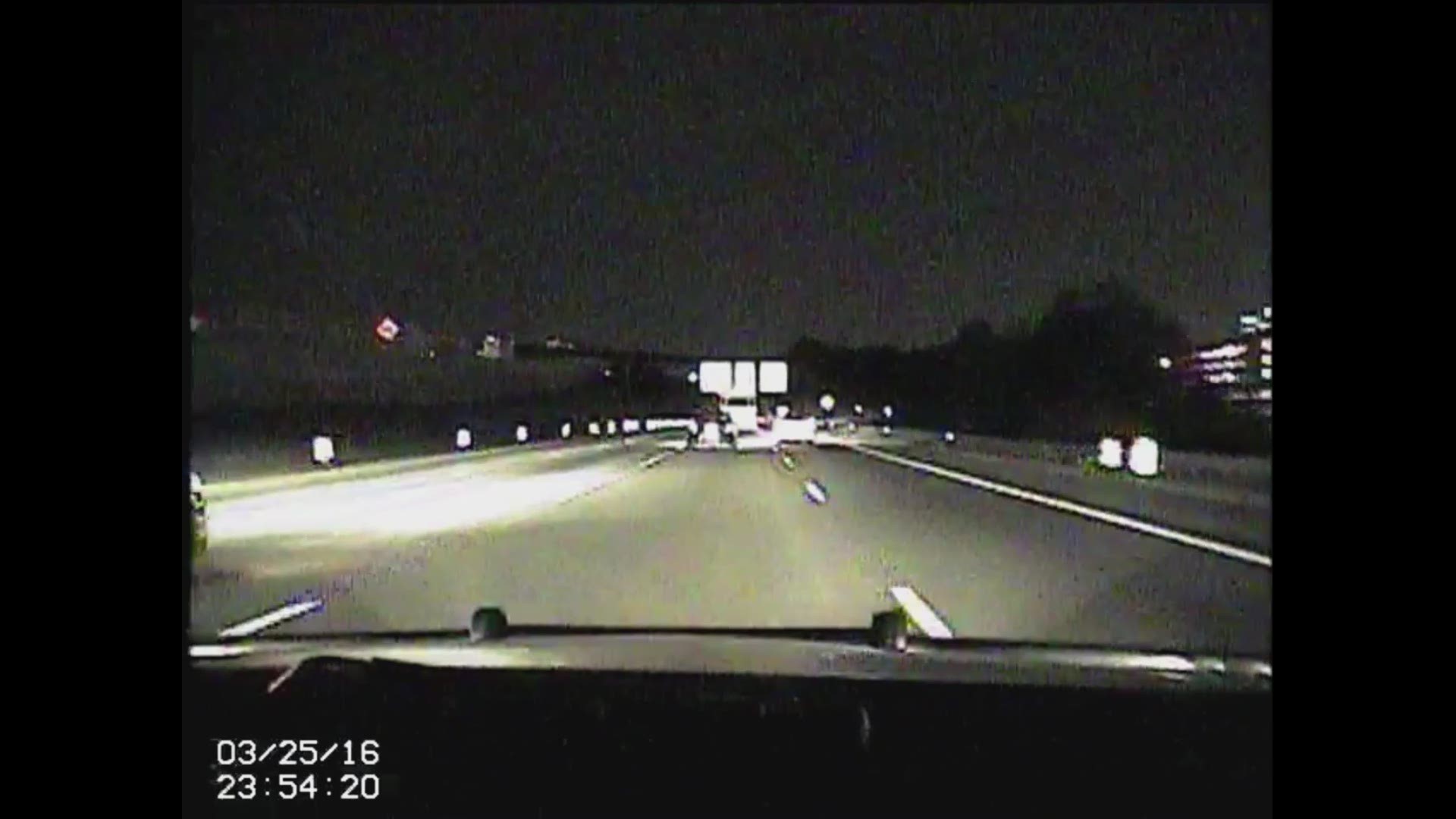 Princess Mbamara was also jailed. She fought the DUI-drug charges for half of 2016.

"So the blood test comes back, and they toss the case?" Keefe asked.

Princess Mbamara's toxicology screening only showed positive for lidocaine - an over-the-counter medication used in products like these back pain medication patches, available for less than $10 at Walmart.

"I remember my lawyer trying to talk about a deal," she said. "I was like, 'I'm not taking a deal. I didn't do anything! I want more than just a deal -- I want more than just dismissal; I want my life back. Can you reverse time? If you can go back in time, then that's what I really want.'"

Mbamara's toxicology screen came back and only showed positive for lidocaine -- an over-the-counter local anesthetic used in transdermal patches to treat back pain, insect bites and other types of pain and discomfort. Lidocaine can be found in many other anti-burn, anti-itch and pain creams, lotions and medications sold both over-the-counter and by prescription under a myriad of brand names, including Aspercreme, Icy Hot, Salonpas, Preparation H, Gold Bond, Solarcaine and others.

An Auburn University student was also arrested by Officer Carroll using the same drug recognition screening protocol. After his blood and urine tests came back negative, charges were dropped by the prosecutor five months later.

►ANOTHER INVESTIGATION: Trigger: Who shot the officer's wife?

Months later, it happened again to an Auburn University student.

Officer Carroll: "You're giving me indicators that you have consumed marijuana, okay? So at this time, I believe that your failure to maintain lane was the reason for that -- so you're being placed under arrest for DUI, okay?"

The prosecutor filed a dismissal of the DUI-drug charge five months later: "Defendant performed well on FSEs (Field Sobriety Evaluations) and blood and urine were negative."

Watch the dashcam from the Auburn University Student's traffic stop: 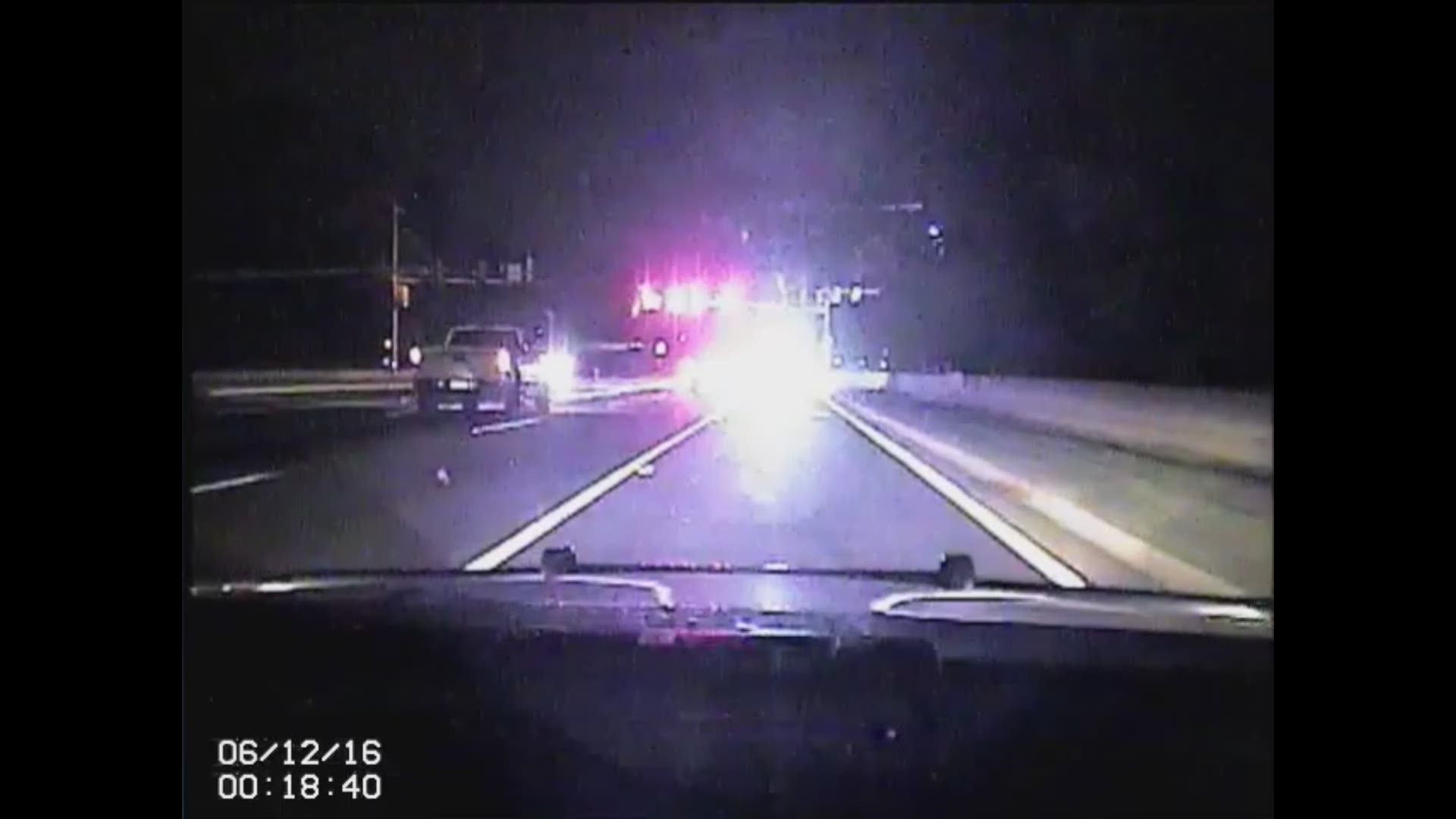 ►ANOTHER INVESTIGATION: From auction block to handcuffs: Why did a legal car auction put a couple in jail?

Documents show Carroll is one of the best-trained officers on Cobb County's legendary DUI Task Force.

Katelyn Ebner: "I understand that. But I can 1,000 percent guarantee you that I don't do that stuff."

He's a certified drug recognition expert -- one of 250 Georgia officers who have gone through a month-long training course.

The DRE Evaluation involves a dozen observations that allow officers not only to pronounce a driver is on drugs, but to identify which of seven types of drugs are in their system.

Princess Mbamara: "How can you look at somebody and say marijuana?"

Officer Carroll: "Because of the totality of the circumstances and a lot of things -- and there are involuntary responses of the body that we can observe that have suggested impairment of marijuana, okay?"

"He looked at you. He did this technique that he was taught, and he determined you were on something you weren't on," Keefe said.

"Yeah, unfortunately for me," Mbamara said.

Officer Carroll relies on his drug recognition expert training -- but in these three dismissed cases, he did not do the full evaluation after the arrests. The standard protocol requires all 12 steps to be completed -- yet, any police officer can make a DUI-drug arrest on fewer observations.

Officer Carroll: "If I establish probable cause, and I believe that based on my training, so that's why I put the handcuffs on you, okay?"

Katelyn Ebner: "Okay, so when I do a drug test, I'll be free to go, correct?"

Officer Carroll: "You're going to jail, ma'am. Okay? I don't have a magical drug test that I can give you right now."

"But he just did the 'magical drug test' that resulted in your arrest," Keefe said.

Cobb County Investigators exonerated the officer and doubted Ebner's innocence, insisting, 'the marijuana could have already metabolized out of the blood.'

"When you brought up that you had a clean blood test when complaining to Internal Affairs, their answer was what?" Keefe asked.

"They said, 'Yeah, we see this happen all the time. Um, the test results come back wrong all the time,'" she said.

"So the test results were wrong?" Keefe asked.

► ANOTHER INVESTIGATION: 3 missed clues: Evidence that could have stopped a killer

"Yeah, that's what they said," Ebner replied. "The test results were wrong, and also, if I had a urine test, it would have come back positive for drugs."

But Katelyn got her own urine test the same week as her arrest -- scanning for any metabolites that would still be in her system. The urine test was also negative for marijuana -- or other drugs.

"This training is so powerful, that they believe they can detect drugs that a blood test will not detect," Keefe said. "Is that surprising to you?"

Last week, Cobb County's DUI Task Force was awarded a trophy by Mothers Against Drunk Driving, and Officer Carroll was given a Silver Medal for 90 DUI arrests during 2016.

"And you were one of them," Keefe said.

"And I'm one of these arrests," Mbamara said. "So this guy is just stacking up on awards and trophies. On ruining people's lives."

"He's getting praised for arresting innocent people," Katelyn Ebner said. "I'm not saying all those people he arrested were innocent, but at least three of them were, and no one is doing anything about it."

"It's something that I'm going to have to carry for the rest of my life," Mbamara said.

Officer Carroll got a promotion and a merit raise after a 2016 employment evaluation -- which also noted most of his DUI arrests end in convictions or pleas. Supervisors call him the department's 'go-to officer when it comes to DUI-drugs." He got top marks for making the correct arrest-no arrest decision on impaired drivers.

There's no mention of the three drivers who had their DUI charges thrown out because of negative lab tests.

What is the Cobb County Police Department saying about all of this?

Commanders would not let Officer Carroll talk with us, but they stand behind the arrests. The department doubled-down on their assertion that the drug recognition expert is better at detecting marijuana in a driver than scientific tests.

Are these isolated incidents? Has something like this happened to you?

We are looking for additional stories of people who have encountered these types of experts at traffic stops in Georgia and elsewhere.