The Drug Whisperer: 'It happened to me'

The 11Alive Investigators broke the story revealing hundreds of innocent people nationwide have been forced to fight DUI-Drug charges in a system that treats everyone as if they’re guilty. 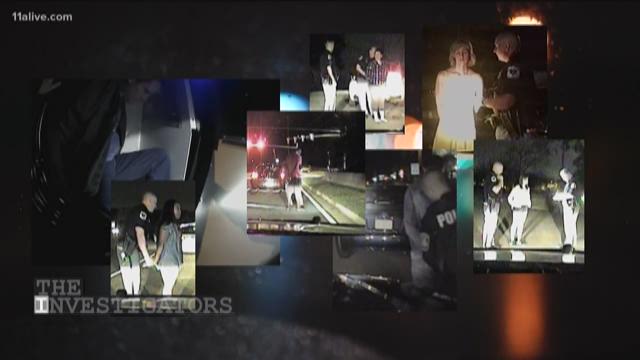 Innocent people are being arrested for driving on drugs. Our investigation shows this is not limited to one arrest or one officer – it’s a nationwide problem.

“What’s really troubling about these warrantless arrests is we have police officers who are going around on our streets, arresting innocent people and throwing them into jail based on a training that is completely unreliable and is based on junk science,” said ACLU attorney Sean Young.

Young and the ACLU of Georgia are suing the Cobb County Police Department on behalf of the four drivers we discovered in our original investigation – drivers who gave their blood to prove their innocence – after they were arrested by one of the department’s drug recognition experts.

“We’re talking about police departments,” Young said, “Teaching them how to be these so-called Drug Recognition Experts and telling them that they need to start pulling people over and throwing them into jail based on the results of this completely bogus methodology.”

That methodology has been validated by multiple studies, but most were funded by the same federal agency pushing the drug recognition expert program.

Other independent studies have concluded a DRE’s opinion of drug impairment is not much better than flipping a coin.

In order to graduate, drug recognition experts are tested using 12 real-world intoxicated subjects in jails or rehab facilities – but the officers know in advance the suspects are on something.

They are not required to evaluate a sober person as part of that test group to see if they detect impairment that is not there.

They hit the streets having seen drugs in every suspect they have evaluated.

“Can you stick your tongue out, real big at me?”

“What’s troubling to me is that these police officers are being told that they can now conduct medical examinations on random people by the side of the road,” Young said. “I wouldn’t trust my own brother to do a medical exam on me because he’s not a doctor. And so, why are we allowing – why are these police departments allowing police officers to go around doing medical tests on people? That’s wrong.”

There are documented, visible indicators not present in most drivers who test positive for marijuana. Red eyes, pupils not dilating or recovering normally, raised taste buds, a coating on the tongue. But any of those symptoms can be caused by something else.

“Stick out your tongue real big…”

The officers believe they are seeing impairment because they are taught to see it. They learn from other officers and from former officers who have been certified as DRE instructors.

In video footage of the original infractions that resulted in the traffic stops that landed all four of the drivers in our investigations in jail – a touch of a lane marker; one straddled the line while deciding between two exits.

► RELATED | 'The Drug Whisperer': How a delayed Benadryl arrest nearly cost a man his children

“You stopped me because I was swerving, right?” asked Princess Mbamara during her traffic stop.

“Because you were failing to maintain lane,” said Cobb County Police Officer Tracy Carroll. “You were driving on the ramp. You were halfway in one lane, and halfway in the other.”

All four of them allowed police to search them and their cars – some even begged the arresting officer for a drug test on the spot along with a search.

“I understand that, but I can one-thousand percent guarantee you that I don’t do that stuff,” Ebner said.

“I can take a drug test – I can do any of that,” Ebner said. “I really don’t. You can call my mother, you can search my car, you can do everything.”

No drugs or drug paraphernalia were found on any of them. The officer’s opinion alone was enough to justify a DUI-Drug arrest – even though in three out of the four cases we profiled, the Drug Recognition Officer did not do the full DRE Evaluation.

All of the certification studies were done on doing this full protocol – this full evaluation, but the officers don’t need that under the law to make an arrest. They need probable cause – which is a much lower standard than 12 steps.

It turns out Drug Recognition Experts get it right in the vast majority of full 12-step DRE evaluations. In the last three years, Georgia DREs completed toxicology tests on 507 drivers suspected of marijuana impairment. Of those, 430 came back positive for THC. That means 77 drivers tested negative, but the highest-trained DUI officers in the state got it right 85 percent of the time.

“You can throw statistics at our clients all day, but what they know is that they were thrown in jail overnight,” Young said. “Some of them have never been arrested ever in their lives, and they now have to answer for an arrest record for a crime they didn’t commit for the rest of their lives.”

Georgia has more drug recognition experts than ever. Why, then, has the total number of 12-step DRE evaluations gone down?

Officers have learned the DRE training allows them to see all they need to justify an arrest without completing the full post-arrest evaluation to confirm it. No one is tracking those cases for accuracy.

The arrests of Katelyn Ebner, Kunle Oriyomi and Princess Mbamara – and their negative tox screens – are not in any federal database, because DREs are required to report only full-evaluation opinions.

Drug recognition experts are trained to see possible indicators as definitive ones, while ignoring negative lab tests that may lower their confidence on the street.

This slide is part of the DRE class in Georgia:

Instructors tell officers, “When this happens to you – and it will – it is important that you don’t let yourself become discouraged. The laboratory is not perfect and the toxicologists won’t always be able to corroborate your opinion, even though your opinion may be accurate.”

When someone tells you you’re an expert, and puts you through this training, do you blame the officers for thinking they have these powers?

“I think if anyone is going through some kind of training, and they get a special certificate at the end of that training, yeah, they’re going to be led to think that they are now an expert on whatever training they went through,” Young said. “But this piece of paper – this printed certificate – means absolutely nothing.”

Courts in some states, such as Florida and California do not allow prosecutors to use the word “expert” when referring to certified DREs. They’re called “Drug Recognition Evaluators” or “Examiners.” Dozens of new DREs just hit the streets in Georgia – funded by special grants from the Governor’s Office of Highway Safety.

Until very recently, federal grants were tied to the number of arrest – not convictions – which created an incentive for police departments to drive up those numbers. That has been changed.

But when we looked at police personnel files, we noticed merit raises for DUI task force officers were often tied to the number of arrests they make – regardless of whether the drivers turned out to be guilty or innocent.

Is this an isolated incident? Has something like this happened to you?

We are looking for additional stories of people who have encountered these types of incidents at traffic stops in Georgia and elsewhere.