Earlier this year, we uncovered the story of The Drug Whisperer. Now, we have found even more cases Cobb County Police originally wouldn't let us see and denied even existed. 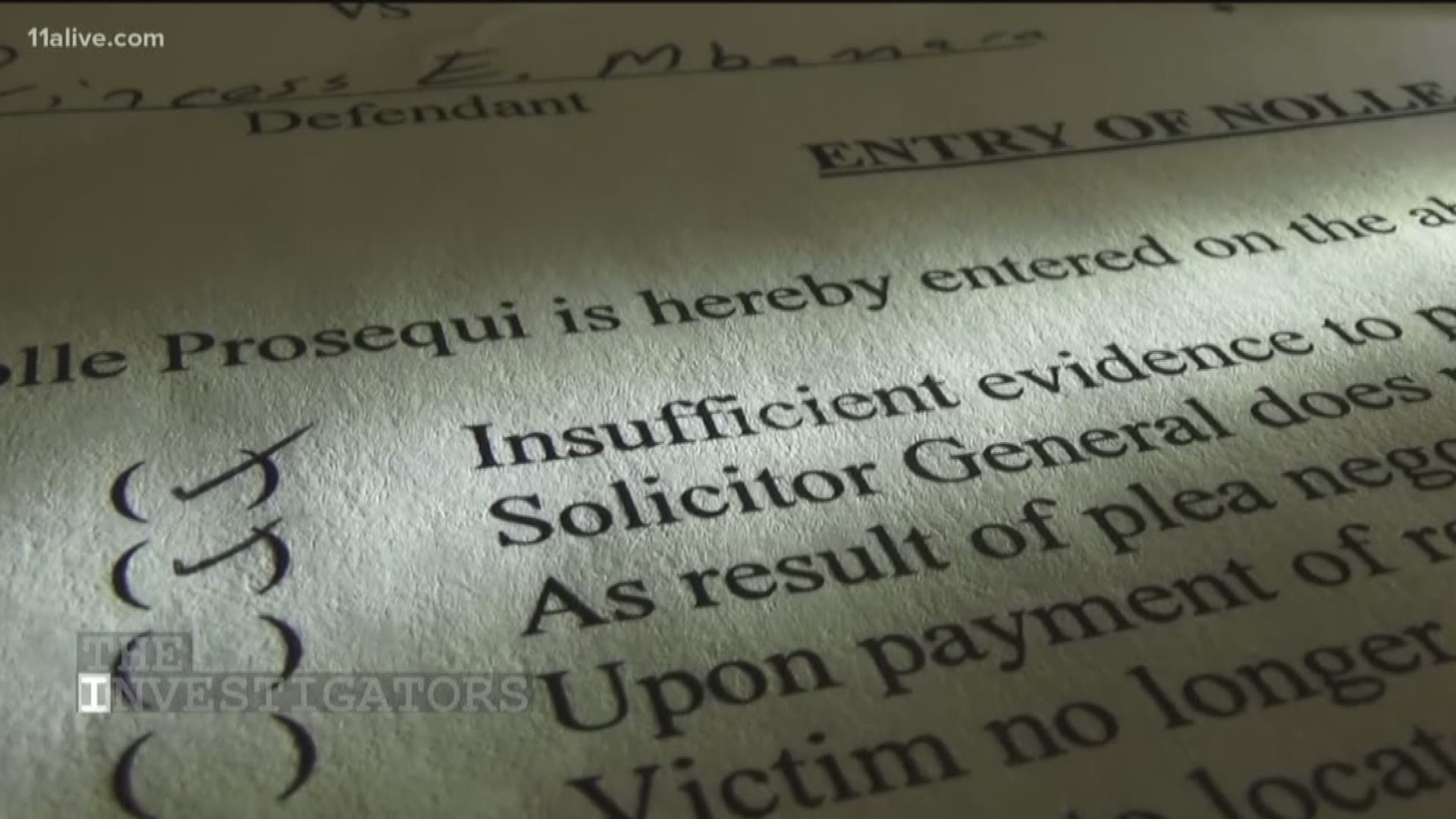 COBB COUNTY, Ga. -- Could you be arrested for driving stoned, even when you’re completely sober?

Police across the nation are getting Drug Recognition Expert training that they say is better than a lab test.

Earlier this year, we uncovered the story of Cobb County Police Officer Tracy Carroll – or as we referred to him, The Drug Whisperer. Now, we have found even more cases from the Cobb County Police Department, that they originally wouldn’t let us see and denied even existed.

In three separate cases that we profiled last spring, Officer Carroll pulled over motorists and insisted that they were under the influence of marijuana.

Cobb County Police Officer T.T. Carroll: “You don’t smoke marijuana?”
Katelyn Ebner: “I do not, no.”

Officer Carroll: “So you’re saying that you haven’t consumed any marijuana?”
Princess Mbamara: “No, sir.”
Officer Carroll: “All right. Well, I don’t believe you’re telling me the truth, okay? Because I’m seeing some involuntary indicators that you’ve consumed marijuana, okay?”

Officer Carroll, a certified Drug Recognition Expert, did not believe these drivers. All three of them gave their blood to prove their innocence.

Princess Mbamara: “Is there a way you can test me right now?”

Katelyn Ebner: “I can give you a drug test right now. I can guarantee I don’t smoke marijuana.”

The charges for all three motorists were dropped months later, when all three blood tests came back negative.

“As far as the individuals unjustly arrested, I believe at the time of the arrest, the officer felt that they were making a just arrest,” Cobb County Police Chief Michael Register told 11Alive Chief Investigator Brendan Keefe.

The Cobb County Police Department has been aware of this problem for at least a decade.

Keefe asked Chief Register about the situation in July, before an ACLU lawsuit was filed on behalf of the drivers in our story.

“The officer’s opinion based on his training is more accurate at detecting impairment of marijuana in a driver than a blood test,” said Keefe, quoting internal Cobb County Police documents. “Is that your understanding? Your belief?”

“We have to base our ability to prosecute on the threshold of the law,” Register said. “And when the evidence or the circumstances do not meet the threshold, then the person should not be prosecuted.”

Publicly, the department announced a policy change after our investigation, no longer jailing suspected cannabis impaired drivers, but privately, Cobb County was in damage control mode.

“Yes, the DRE’s training does indeed allow them to often detect impairment that does not later show up in blood/urine toxicology tests,” DUI Task Force Commander Lt. Greg Abbott wrote to his chief.

One official wrote, the department has “taken quite a negative PR hit because of this story. Our Facebook page has been blowing up with tons of negative comments.”

Right after our story first aired, and a full year after Katelyn Ebner’s arrest, Cobb County had the Georgia Bureau of Investigation’s Crime Lab check her blood a second time.

The GBI was asked to use a more sensitive test for the components of THC. The GBI Crime Lab reported – again – negative results, across the board.

“At the end of the day,” Keefe asked Ebner, “did they ever apologize?”

“Nope, they never apologized,” Ebner said. “Officer (Greg) Abbott did say, ‘I know you don’t trust me, but I’ll always be there for you.’ And my response was, ‘To put me back in jail again for something I didn’t do?’”

In that memo, Lt. Abbott wrote, “Keefe purposely and knowingly allowed [Ebner] to lie during her interview. Keefe allowed Ebner to make the statement that she had ‘never smoked marijuana’ and to air that statement on Channel 11, and to post it to the Channel 11 website.”

But that statement appeared nowhere in the television story 11Alive aired.

In the interview, Ebner said, "I've never done drugs," but afterward, clarified to The 11Alive Investigators she tried marijuana some years earlier. We chose not to include either statement because that fact was not relevant to the charge that she was high on the night of her arrest.

Ebner did deny ever smoking marijuana when first stopped by Officer Carroll, telling him, “I can promise you, I have never -- please -- I have never smoked marijuana." That exact quote from the police video was included in the web story here on 11Alive.com in the context of the traffic stop, but it was not in the TV story.

We also posted the entire dash cam recording in that same web story, in which Ebner later admitted to trying marijuana years before the stop, saying, “I have smoked marijuana maybe one time in my life and it was like seven years ago.”

Lt. Abbott’s false claim was the primary example cited to support his argument that the 11Alive chief investigator had been “unethical and unfair” in his reporting.

Elsewhere in the five-page document, Abbott cited Keefe’s “lack of research,” but told his bosses there were only 190 active Drug Recognition Experts statewide, when in fact the state of Georgia reported there were more than 250 active DREs in the state at that time.

Abbott wrote that there were no other negative blood tests for arrests by this officer where the drivers denied consuming marijuana.

The Cobb County Police Department had no problem reporting that Carroll had made 90 arrests when they reported his record to Mothers Against Drunk Driving -- for which he received a Silver Medal last year.

► RELATED | 'The Drug Whisperer': How a delayed Benadryl arrest nearly cost a man his children

So, why, when we asked for every one of Carroll’s arrests during 2016, were five of those arrest reports missing?

This narrative is from one of those cases that Cobb County did not tell us about – shown here for the first time.

Brittany Penwell is a young mother, and a fourth arrest by Officer Tracy Carroll.

Officer Carroll: “Most people tell me that they don’t – but ma’am, I believe, based on my observations, that you have consumed marijuana, okay, to the point that it’s made you an impaired and less-safe driver, all right?”

In March 2017, a police captain certified in writing, “there were no other reports excluded due to OCGA 35-3-37 (expungements).”

The Cobb County Police Department gave the 11Alive Investigators a Drug Recognition Log for Officer Carroll – with much of the toxicology blacked out. But we obtained an unredacted copy, which was shared internally among commanders.

Hiding behind those redactions was Brittany Penwell’s negative drug test, and yet another negative tox report for a fifth marijuana arrest dismissed for “NO TRACES” of marijuana in the blood. Two more negative tests, hiding behind the Cobb County Police Department’s black marker.

Yet, the DUI Task Force Commander told his superiors we picked the only three cases in which drivers denied using marijuana.

Chief Register took command of the Cobb County Police Department in the early summer of 2017. 11Alive requested an interview with the chief, and he asked his DUI Task Force commander for background. Lt. Abbott apparently replied to Keefe by accident, asking his new chief, “Why are we still speaking to this dishonest guy?”

Keefe forwarded the email on to Chief Register and offered the opportunity to correct anything that we may have gotten factually wrong, or to rectify anything that may have been perceived as "dishonest" in any way.

Keefe also noted that we had an obligation to speak with Lt. Abbott on camera in his capacity as head of the DUI Task Force. Abbott declined our interview.

Keefe asked Chief Register about the email during the interview.

“This is at the very top of his memo -- saying we’re being dishonest,” Keefe said. “The reason this is relevant is because Lt. Abbott commands a unit that has the power, on a single officer’s opinion, to lock someone up. If he is willing to alter the facts to fit his case in a written document – an official document – how can we trust him not to alter the facts in a case that might result in someone losing their freedom?”

“I’ve always known him to be an honorable person and a good officer,” Register answered.

A video of DUI Task Force Commander Lt. Greg Abbott during a traffic stop surfaced shortly after our interview with Cobb County Police Chief Mike Register. After the events depicted in the controversial video, Abbott retired after 28 years with the Cobb County Police Department in lieu of termination.

As for the five missing cases, the Cobb County Police Department says software prevented a low-level department staffer from seeing them because they had been expunged. Three of the five cases with negative blood tests were among the files Cobb County did not originally acknowledge.

Meanwhile, one of the cases we uncovered – Brittany Penwell – has joined the three other plaintiffs in the ACLU’s lawsuit against the Cobb County Police Department for wrongful arrest.

The GBI is now considering cutting in half its threshold for further testing for the components of THC in half because of complaints from Cobb County Police. Right now, the GBI crime lab says only 6 percent of suspected marijuana cases statewide fall below the higher threshold.

Is this an isolated incident? Has something like this happened to you?

We are looking for additional stories of people who have encountered these types of incidents at traffic stops in Georgia and elsewhere.