The Athens-Clarke County board could vote on a proposal as early as next week. 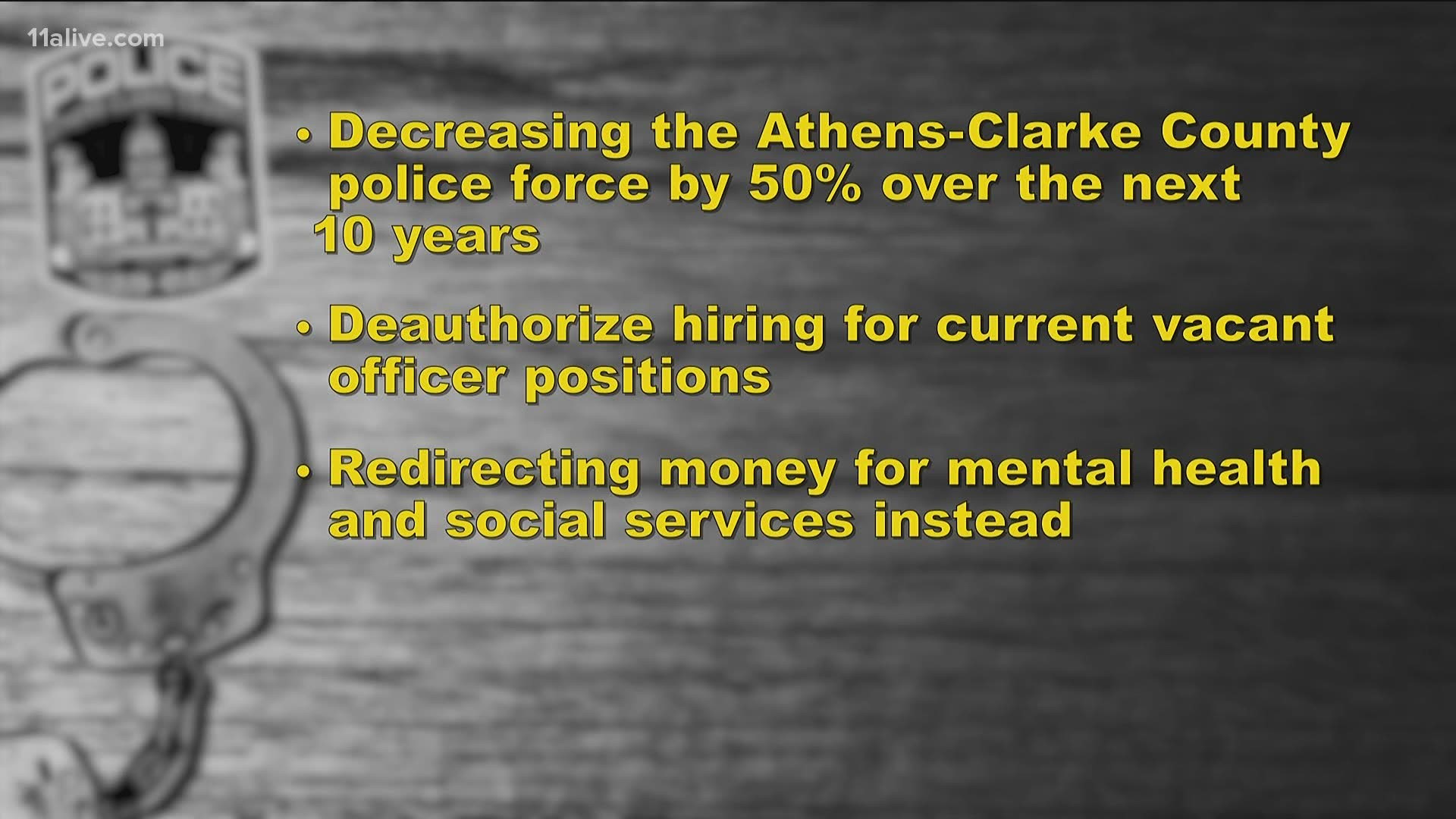 ATHENS, Ga. — As protests against police violence continue, there are now more calls for communities across the country to scale down their police departments and put more emphasis in social programs that target the root cause of issues that lead to police response.

11Alive has learned there is now a proposal in Athens-Clarke County that could put police funding up for a vote in just a matter of days.

But Athens-Clarke County Commissioner Mariah Parker says they also could have possibly been prevented.

“Serious reforms are necessary,” she told 11Alive Investigator Faith Abubey in an exclusive interview on Tuesday.

Commissioner Parker has put together a four-page proposal laying out what those reforms would look like. The measure could be put up for a vote as soon as next Tuesday, June 16.

It would be part of the 2021 Athens Clarke County budget amendment.

“There is a variety of community response that we can implement in order to take the burden off our police department and ensure that people experiencing crises get the help that they need,” Parker explained, adding that the plan includes:

► READ THE ENTIRE PROPOSAL AT THE BOTTOM OF THIS STORY

“I've actually been really inspired by the outpouring of support that's come from the communities thus far, I've gotten hundreds of emails from constituents in support of this plan,” Parker said.

Among the supporters, commissioner Tim Denson, who has also signed on to the plan.

“It has become apparent that we must create and fund a system that has the resources, knowledge, and capacity to connect individuals to the resources they need and help people through mental health crises. I am proud to co-author the 50/10 Plan to Reimagine Public Safety in Athens. If we move in this direction, we will save lives, make a safer city, and a more equitable community," Denson said in a statement to 11Alive.

The ACLU of Georgia also sent a letter to Athens-Clarke Mayor and Commissioners in support of the budget proposal.

“We urge you to enact this bold, thoughtful plan, rather than accept the status quo that results in millions of dehumanizing encounters each year and which resulted in Athens-Clarke sworn officers fatally shooting six people in 2019,” said Andrea Young, executive director of the ACLU of Georgia wrote in the letter. “It’s time to reimagine the role, responsibilities, and presence of police officers in the everyday lives of Black and Brown people.”

But despite the support she says she has, Parker might still face some opposition -- including Athens-Clarke County Police Chief Cleveland Spruill.

"That's just a shotgun approach to looking at how to do something," said Spruill. "If we're going to think about the police in the police department we need to look at what our challenges are, what our needs are and be thoughtful about what percentage if any really needs to be reduced and then do it based off of that and not just say chop everything in half."

Spruill says he agrees with parts of Parker’s proposal but cutting funding to the police department to address other issues isn’t the answer.

“I understand that some political education is still necessary to get everybody on board. A lot of folks have questions about, you know, what happens if your house gets broken into and there's someone with a knife,” said Parker. “And that's why we're calling for a 50 percent reduction and not complete disbandment as the Minneapolis City Council.”

Amid protests over the death of George Floyd in police custody, the Minneapolis City Council announced its intent last week to disband the police department.

Spruill says unlike what protesters have characterized as excessive use of force by police against Black community members, "none of the people that were shot by [Athens-Clarke County police officers] were African Americans. We had one Hispanic. And then, I think two Asians and the others were Caucasian but in each of those instances it involved an individual, a person who either shot around, at our police officers, pointed a gun at our police officers or attacked a police officer with a knife. And so, in those cases our officers. Only use lethal force in order to defend their own lives against a violent attack on them."

Spruill also notes, "there was mental health involved in these police shootings."

Since the 2019 officer-involved shootings, Spruill says he has made several changes at the department including a requirement that the entire police department take an "integrated communications assessment and tactics" training.

RELATED: How law enforcement continues their work, while social distancing

"It's the nation's best practice training that is developed by the Police Executive Research Forum. It's geared to do exactly that, to teach officers skills so that they can use to de-escalate and prevent from having to get into a deadly force situation with an individual who is in mental crisis, and who is on drugs. And so all of that training we do regular crisis intervention training," explained Spruill.

Parker, who lost her aunt to a murder in 2018 by her own cousin, says police were instrumental in bringing justice in that case, but perhaps that tragedy too, could have been prevented had public safety been re-imagined.

“I want to let people know how important it is to take the burden off policing for addressing the wide variety of community crises we do experience,” Parker explained. "The old saying goes when you're a hammer, everything you see is a nail or something like that. And so I understand that the bold proposal that I am putting forward, might shock those who are inculcated with the police logic of how necessary their services are, and so I'm willing to sit down and have those conversations."

Parker says she has tried for two weeks to have those conversations with the Athens-Clarke County police chief but has still not gotten a response.

11Alive has also reached out for a comment from the county and the police department.

How will protests impact the spread of COVID-19 in Georgia?