Our investigation for solutions to puppy mills took us to Pennsylvania, where a special team of officers help animals and punish those who hurt them. 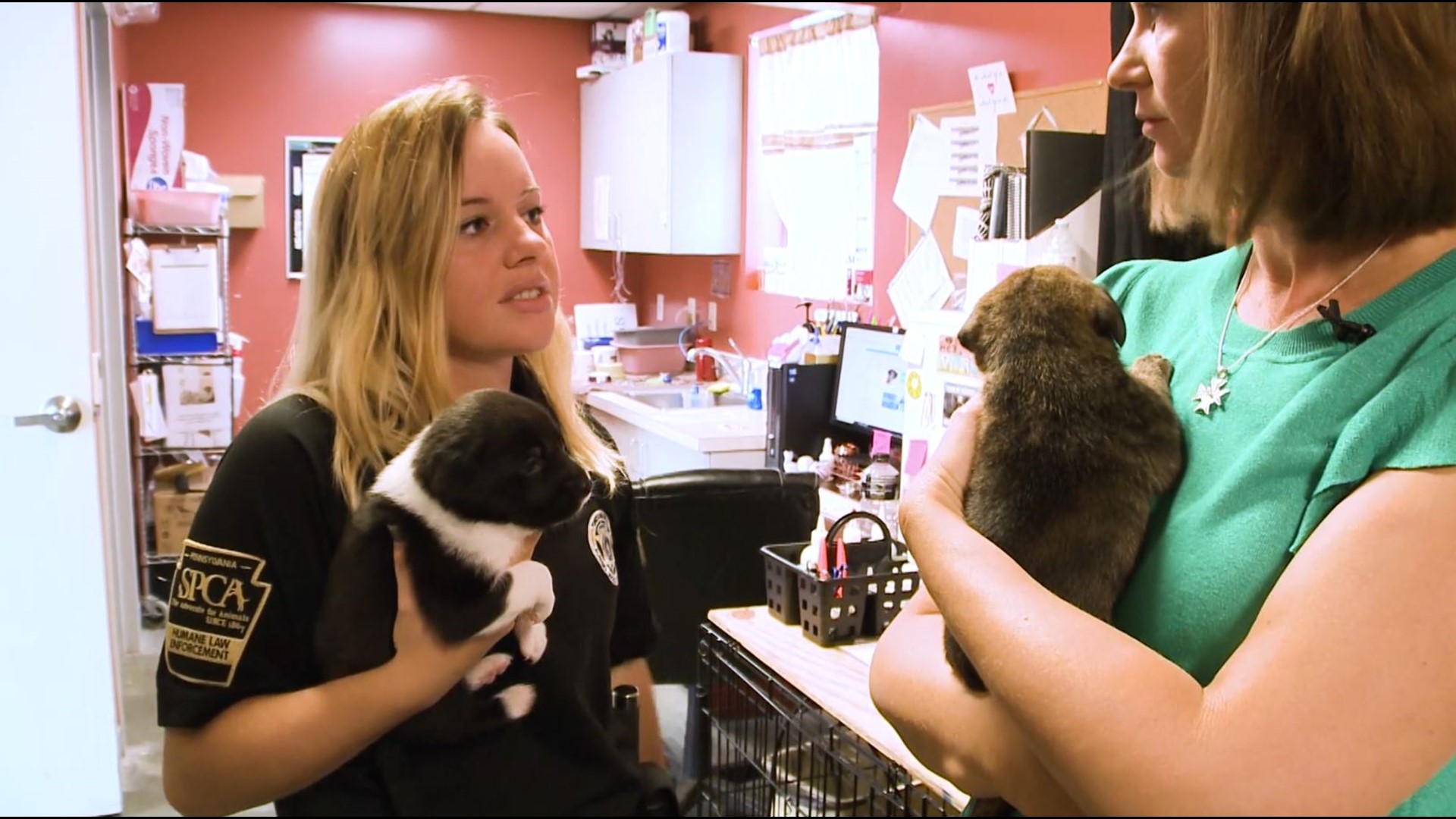 Pictures of potentially abused animals at Georgia dog breeding facilities emerged earlier this year – yet local law enforcement did little, if anything, about it.

In Montgomery County, inspectors with the Department of Agriculture appealed to the sheriff, but it took a public outcry to get action. Sheriff Doug Maybin said at the time his officers weren’t trained to recognize animal cruelty.

In Long County, the sheriff apparently saw nothing wrong with the 70 dogs rescued from a licensed breeder, one with no lower jaw. Local volunteers with The Guardians of Rescue say they tried to report the dogs' medical needs and conditions at the breeding facility, but received no response.

These kinds of cracks in the system are why one state turns to independent investigators to do what local law enforcement often can’t or won’t – stop animal cruelty.

Pennsylvania's Humane Society Police Officers are hired by animal welfare groups and can only investigate offenses related to the state’s animal cruelty laws. They aren’t animal control, they don’t catch strays. If other potential crimes exist on a property, the local law enforcement is called to handle it.

RELATED: She gave birth to 150 puppies then was discarded. How Victoria's story could stop puppy mills

“We have arresting powers, we do search warrants, we give out charges, we go to court,” explains Officer Jennifer Nields, who works for the Pennsylvania SPCA, or PSPCA.

Officers must complete a two-week training course that covers everything from proper execution of search warrants to accepted agricultural industry standards for keeping animals. It’s all necessary to differentiate between what the law allows and doesn’t, and how to build a case when the law is broken.

Officers are not bound by jurisdiction, but they do need permission from the local district attorney and the courts for any community they wish to serve.

Nields in sworn in to investigate animal cruelty in several counties, but directly covers three as part of her work for the PSPCA, which calls their investigators Humane Law Enforcement Officers. The PSPCA has nine officers this year, a significant drop due to funding, which is reliant on donations.

While the number of officers has dropped, Nields says the need has not.

Pennsylvania is a picturesque state of rivers, farm fields and houses that dot the hills. Nields says that beauty makes it easy to hide animal abuse.

“We can’t do our job without the community being able to look out for the animals too and reporting what they see," she says. "If they turn a blind eye, nine out of ten chances we’ll never find them.”

Like the produce delivery driver that spotted a Boston terrier puppy near death, covered in a foul-smelling mange. The backyard breeder, not interested in providing medical care, allowed the man to take him.

“When I went to pick him up he was in a cardboard box in a garage and I laid blankets out on my seat and I said if he’s going to pass away it’s going to be comfortable,” remembers Nields.

The Speranza Animal Rescue that cared for Libre named him after the Spanish word for free. They expected to put it on his box of ashes to signify he was free now from the pain and suffering in this world.

“These people are having to actually stand in front of a judge now," Nields says. "And to respond to the things that they actually did.”

As lawmakers and animal groups fight to change laws, Nields says it’s her job to enforce them.

The tips that day ranged from a farmer accused of neglecting his injured draft horse to a small scale breeder tethering his dog 24 hours a day, a violation of Pennsylvania’s law.

“I think the starvation cases are the ones that sit with me the most. The animals that are just left to starve to death,” said Nields.

The tips get her on property where she always looks for other concerns. At one stop, the officer noticed kennel structures and the sound of dogs. She made a note to verify the owners have a license.

The PSPCA says having someone independent, that’s dedicated to animal cruelty, is important.

“The animal is not going to provide us with information on who did what to them. So being able to make assessments based on how the animal is acting, physical condition of the animal, those are all things that you have to be consistently trained on,” said Sergeant Nicole Wilson, who leads the PSPCA’s program.

“This year we’re on track to be between 95-98% successful prosecutions. We’ve only lost one case all year," exclaims Wilson.

Among them, an unlicensed vet taking away female dogs' voices by shoving a pipe down their throats in a cruel process known as debarking. Nields says some breeders do it so nosey visitors won’t know the dogs are there.

“She would do these procedures on dirty barn floors, it wasn’t sanitary. The animals were not under anesthesia,” said Nields.

But investigations are expensive, because they often mean dogs need to be rescued and treated medically. Many will have to be housed for months as the court case plays out.

“We spend, depending on a given year, between three and four million dollars,” said Wilson.

The non-profit is dependent on donations to fund that work.

“Those local and state police officers don’t have any place to take those animals if they seize them,” which Wilson adds may make them more likely to look the other way or limit their response. Wilson says some smaller non-profits trying to fund an officer may also have similar challenges.

That’s why the PSCPA hopes lawmakers will see the work they do enforcing the state’s laws and begin to provide financial assistance. Wilson worries about drops in donations, because she knows animal cruelty is often linked to other crimes.

“Many of our animal neglect cases also have a component of other people being neglected as well. Whether that is an elderly member of the family, whether it is children in the household. When you’re talking about the animal fighting you have obviously the guns and drugs," said Wilson.

Strict regulations around kennels have helped to reduce cases of animal cruelty at licensed breeding facilities. But the state doesn’t require a license for those that possess or sell fewer than 26 dogs, and many kennels try to skirt the requirements by going unlicensed.

“It’s in that space where we see a lot of work. The things that we’re often dealing with are the people who haven’t met the standard and are trying to operate in the grey space  And those are the cases where we go in and tend to take a lot of animals out and we prosecute those cases hard,” Wilson explained.

Nields says the job comes with a lot of responsibility. It’s physically and emotionally exhausting.

“This job, no matter how many times I’ve lost sleep over it… no matter how heart wrenching it is, I don’t think I could imagine myself in a different position," said Nields.