Kidney disease took his legs and the use of much of his hands. But the procedure to prove his illness was caused by contaminated water is 'too dangerous' 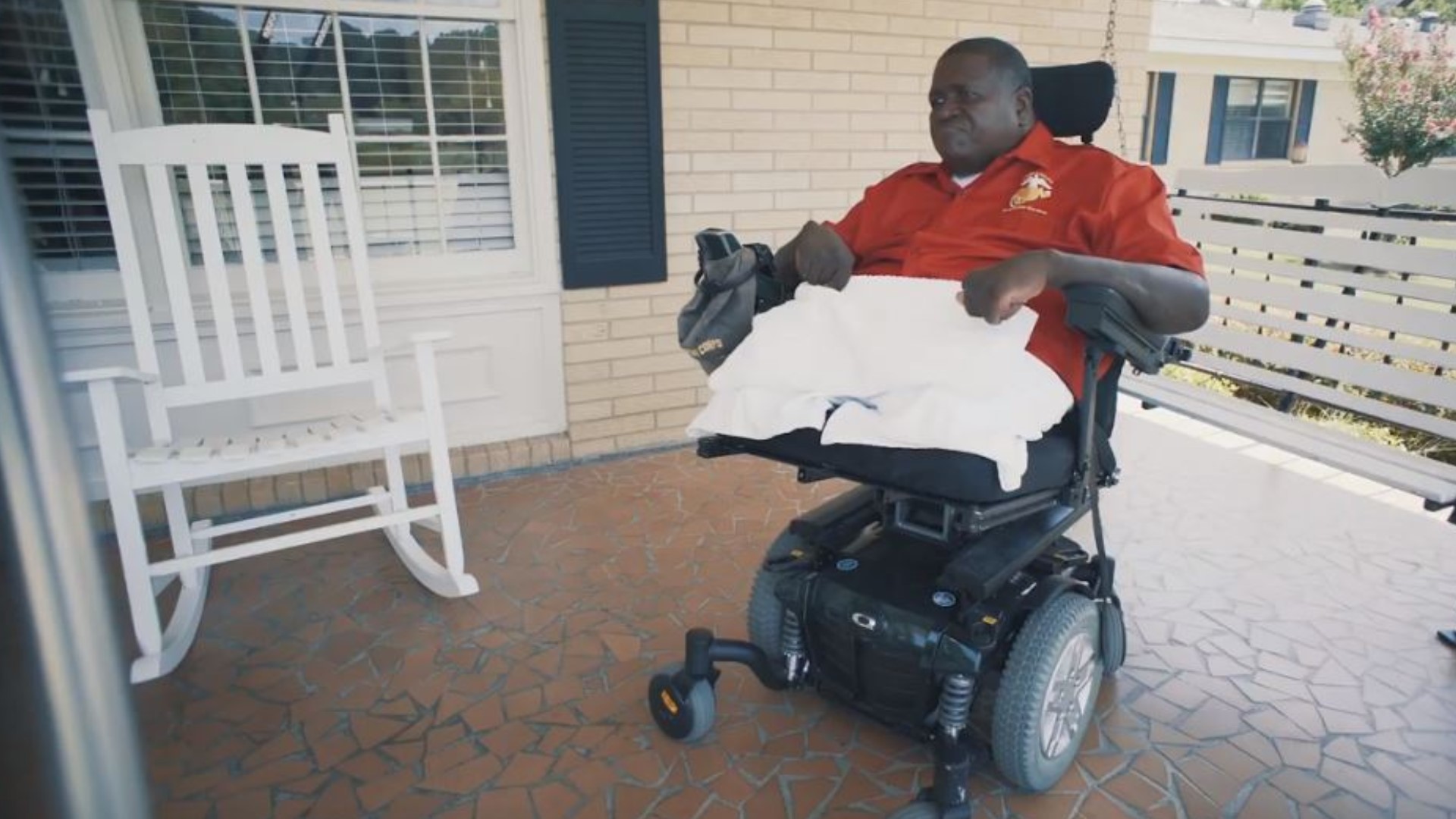 ATLANTA — A number of Marine Corps veterans in Georgia are currently fighting to get the U.S. Department of Veterans Affairs (VA) “to do the right thing.”

The veterans are part of nearly a million servicemen and women the VA admits were potentially exposed to contaminated water while stationed at Camp Lejeune.

But an investigation by The Reveal has found despite the federal government promising for years to take care of the servicemen and women impacted by the water contamination, most of the veterans’ claims for medical/health benefits are being denied – even as some sit close to death.

Willie Copeland’s claims for benefits have been denied three times in the last six years. Amid the discomfort and pain he feels throughout his body every day, he finds peace and comfort in his spirituality.

“I’ve read the Bible through a couple of times,” Willie explains. “Kind of takes my mind off everything.”

At 55 years old, life has thrown a lot at him. End-stage kidney disease has stolen both his legs, much of his hands and a lot of his dreams.

“I mean,” Willie stops mid-sentence as he gets emotional. He drops his head and covers his eyes with his now deformed fingers.

“Excuse me,” he says, as he regains his composure during an interview with The Reveal's Faith Abubey. “When I think about it, it makes me want to cry… I mean, I didn’t ask for this. I didn’t do anything wrong.”

The Marine Corps veteran has no doubt his service in the military is what caused the painful damage to his body.

Not in combat, but through toxic water -- the only water he had to drink, to bathe, and to cook with during his two and a half years stationed at Camp Lejeune.

“I was drinking like a lot [of water],” Willie recalls of those hot North Carolina days on base in the 1980s after drill exercises. “I didn’t know it was contaminated.”

The military admits between the 1950s and 1980s the water at Camp Lejeune was poisoned by fuel leaks and potentially other sources.

According to the Camp Lejeune Water Contamination (CLWC) benefits eligibility guidelines, 30 days of exposure to the contaminated water is enough to cause concern.

The VA also admits Willie is one of up to one million service members potentially exposed to the chemicals. But in a letter to the veteran, the VA says there’s no scientific evidence the contaminated water is what caused Willie’s kidney problems.

“[The contamination] was so bad that they thought if you were there for 30 days that your body could be damaged. And I was there for two and a half years,” Willie said.

So far, the U.S. government has linked eight medical conditions to the contamination.

In emails to The Reveal, the VA’s Public Affairs Office highlights the fact that the Department has approved 74 percent of claims for those presumptive conditions.

That office has declined our repeated requests for an interview about how the benefits are being processed.

We requested the raw data for claims under the Camp Lejeune Contamination from the department’s records office and when we crunched the numbers, we found the administration is actually only approving less than 25 percent of all the issues claimed under CLWC.

In less than nine years, veterans have filed claims for more than 84,000 conditions related to the contaminated water at Camp Lejeune, according to records released to The Reveal by the VA.

See below for the number of issues claimed in each state, that were based on CLWC between January 2011 and June 2019.

Looking at the data, Marine Corps veterans and their families who have settled in Georgia are seeing the highest denial rate out of the top five states with the highest number of total issues being claimed.

Florida, North Carolina, Pennsylvania and Texas round out the top five.

“They know the water was contaminated. They know it was a problem and now they're refusing to step up to the plate,” Willie said.

While the public affairs office focuses on the approval rate for the presumptive conditions, vets like Willie say the list isn’t comprehensive enough.

A spokesperson for the Department said in those email exchanges that the veterans were denied because there’s no evidence of a diagnosis, no evidence that the disability is related to military service or the condition cannot be established by presumption.

RELATED: He served his country: How his family believes a Vietnam War parasite killed him 46 years later

But Willie’s kidney doctor of 15 years, Dr. Robert Shay, says the veteran carries a logical stream of events that offers some evidence the VA should consider.

Dr. Shay also says given Willie’s condition, there’s virtually no safe way to give the VA the scientific evidence it’s asking for without risking the veteran’s life. Willie was born with only one apparent kidney, which Shay says, has nothing to do with his current medical problems. A test for scientific proof would require a biopsy on that kidney.

“He was never really a very good candidate for a kidney biopsy, which would be the only way to definitively decide without putting him at some risk. Because, if he had a complication from the biopsy, he would have been immediately on dialysis. So, you know, in the kidney world, most kidney doctors, not all, but most kidney doctors, would shy away from doing a kidney biopsy and putting somebody’s remaining healthy kidney or even partially, at risk,” Dr. Shay explained.

“It’s a sad situation, I think my feeling is that his case should be completely reviewed. You know, if I was involved in looking at this from a medical, legal perspective, I would certainly make the assumption that he had suffered as a result of exposure,” Dr. Shay added.

In documents reviewed by The Reveal, VA decision-makers said they considered 28 pieces of evidence including medical records before denying Willie’s claims. But Dr. Shay says none of that included more than a decade of medical records he has on the patient.

“The VA has never contacted me, personally, to ask me for my records or to ask me about what I perceive to be his issues. So, they are missing a major link. I mean, I’ve been his nephrologist since 2004,” the doctor explained.

The VA also says its team considered the results of a medical exam they performed on Willie in September 2017. But a screenshot the veteran provided The Reveal team from his VA account shows that appointment and a subsequent appointment in October were both cancelled.

“It sounds to me like it's the kind of process that is often used by insurance companies where you really have to fight for your benefits, even though the right for those benefits is pretty obvious to everybody else around,” Dr. Shay said. “It's amazing how the system works. People just deny and deny and deny that harm was done to somebody.”

“I think it’s obviously a system that is not working to the benefit of the people who have been in the military and protected us all,” Dr. Shay explained. “We live in a world where we don't acknowledge the responsibility of the government to take care of things that they caused, and or to support those people who have been at the front lines."

When Willie enlisted in the Marine Corps at 18 years old, he knew he would have to fight.

But this wasn’t the fight the Marine anticipated.

“The VA has, I mean, they have failed me miserably over the last few years. You know, I just feel like no one cares. it’s just hard to bear sometimes,” Willie explained.

'Once a Marine, always a Marine': Veteran gets new kidney after years of denial from VA