Glynn County Commissioners have publicly said the original DA prevented the arrests of the McMichaels. 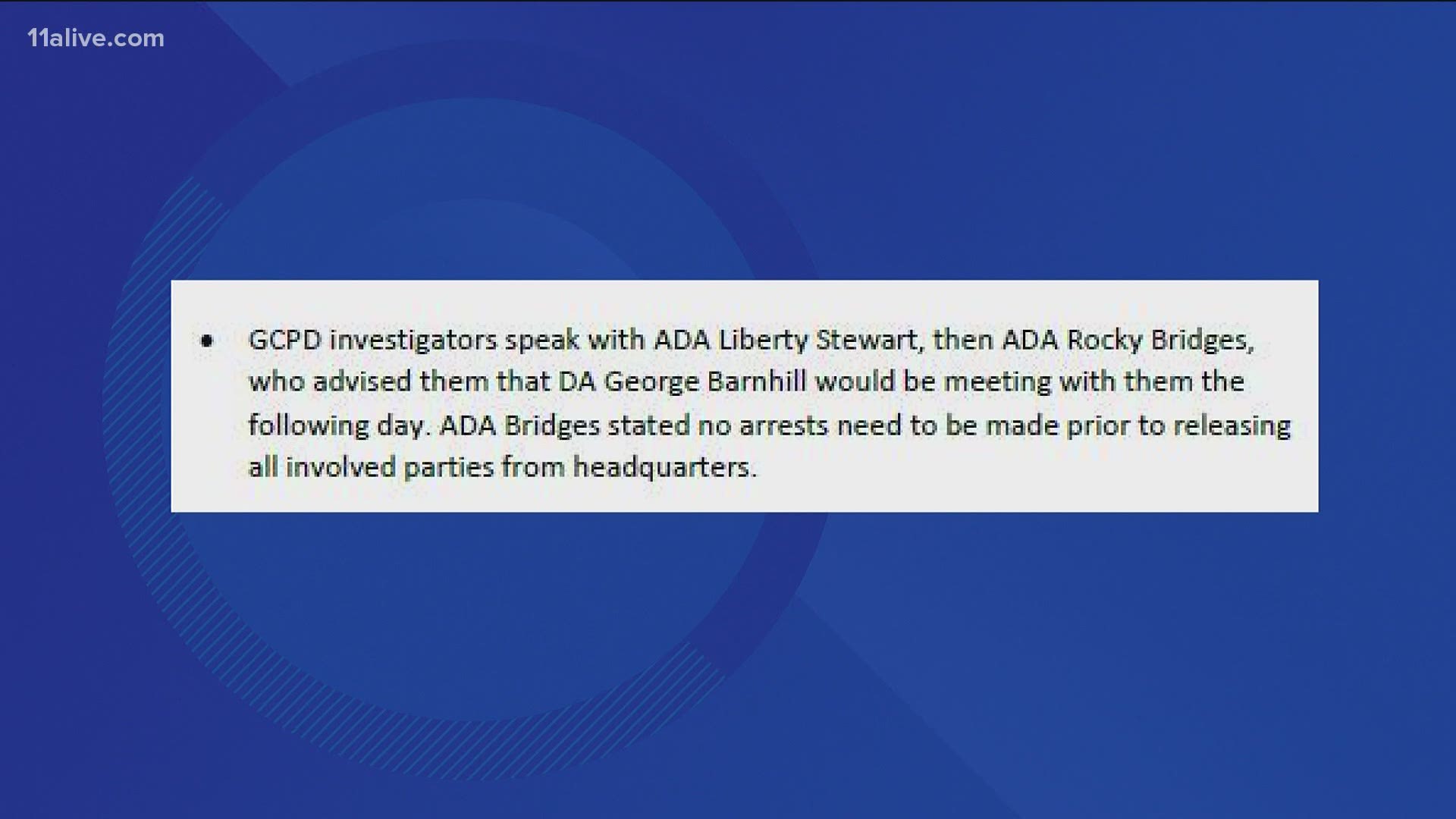 GLYNN COUNTY, Ga. — As protesters call for the Brunswick Judicial Circuit District Attorney Jackie Johnson to step down amid her office’s handling of the Ahmaud Arbery case, tensions are brewing between her and county commissioners, who have publicly accused her of preventing an arrest in the early days of the south Georgia shooting.

Arbery was gunned down in the Satilla Shores neighborhood on Feb. 23. Father and son, Gregory and Travis McMichael, told police they pursued Arbery because he looked like a burglary suspect. The older McMichael, Gregory, is a former police officer in the Glynn County Police Department and, more recently, an investigator for the Brunswick DA's office. He had retired less than a year before the shooting.

According to records from Glynn County, police investigators on the Arbery shooting reached out to DA Johnson’s office within hours of the shooting, asking for legal advice on how to handle the case.

“GCPD investigators [spoke] with ADA Liberty Stewart, then ADA Rocky Bridges, who advised them that DA George Barnhill would be meeting with them the following day. ADA Bridges stated no arrests need to be made prior to releasing all involved parties from headquarters,” a police timeline reveals.

DA Johnson’s office then recused itself from handling the Arbery case on the day of the shooting.

Two other district attorneys handled the case before Georgia Attorney General Chris Carr appointed a special prosecutor and the GBI to look into the shooting.

On May 7, nearly two months after the shooting and two days after officially taking over the case, the GBI arrested the two McMichaels.

Glynn County Commissioners Allen Booker and Peter Murphy made a public statement the next day claiming Johnson previously prevented the arrests in the case.

"[Johnson] shut down [police] to protect her friend McMichael," Booker is reported as saying.

DA Johnson later released a statement to the media, including 11Alive, saying, "it is unfortunate that Commissioners [Peter] Murphy and [Allen] Booker have chosen to make false accusations against District Attorney Jackie Johnson in an attempt to make excuses and ignore the problems at the Glynn County Police Department, for which they are ultimately responsible," the statement read, adding that the acting police chief indicated it was a mistake that then-Police Chief John Powell did not immediately call in the Georgia Bureau of Investigation.

The disagreement didn’t end there.

Documents obtained by 11Alive show text messages where county commissioners were discussing whether to issue a news release on May 8.

Booker wrote in the thread “I think it needs to go out now. This is not about local news, we are getting killed 24/7 and I have several media outlets that can get this statement out now. Our side out now, she had said that [Commissioner Murphy] and I are making false statements, I am not giving her 48 hours to say I am lying, send me final version or I am sending the draft, I am not getting slammed without fighting back!!!!”

The Glynn County Commission Chair Michael Browning responded, “considering your points, commissioner, I agree we should release it now.”

The documents obtained by 11Alive through the Georgia Open Records Act show, days later, on May 12, Attorney James Stein faxed a cease and desist order to Glynn County Attorney Aaron Mumford regarding Commissioners Booker and Murphy’s statements about DA Johnson.

“Dear Mumford: Please be advised that you are notified the actions and statements of commissioners Murphy and Booker amount to libel and slander as defined by O.C.G.A. §51-5-1 and §51-5-4. Your clients are put on notice that they should immediately cease and desist from making any statements that Jackie Johnson and/or anyone associated with the Brunswick Judicial Circuit District Attorney’s office advised any law enforcement official that no arrest should be made in the investigation pertaining to Ahmaud Arbery As you are aware, defamed public officials and public figures can recover upon a showing of actual malice and renders the persons libel for damages. Further, notice is given for a retraction be made pursuant to O.C.G.A. §51-5-11 within the time limit set in said code,” attorney James Stein wrote on behalf of DA Johnson.