An 11Alive investigation looks into how the Ahmaud Arbery case was handled and why there is now a state and federal investigation. 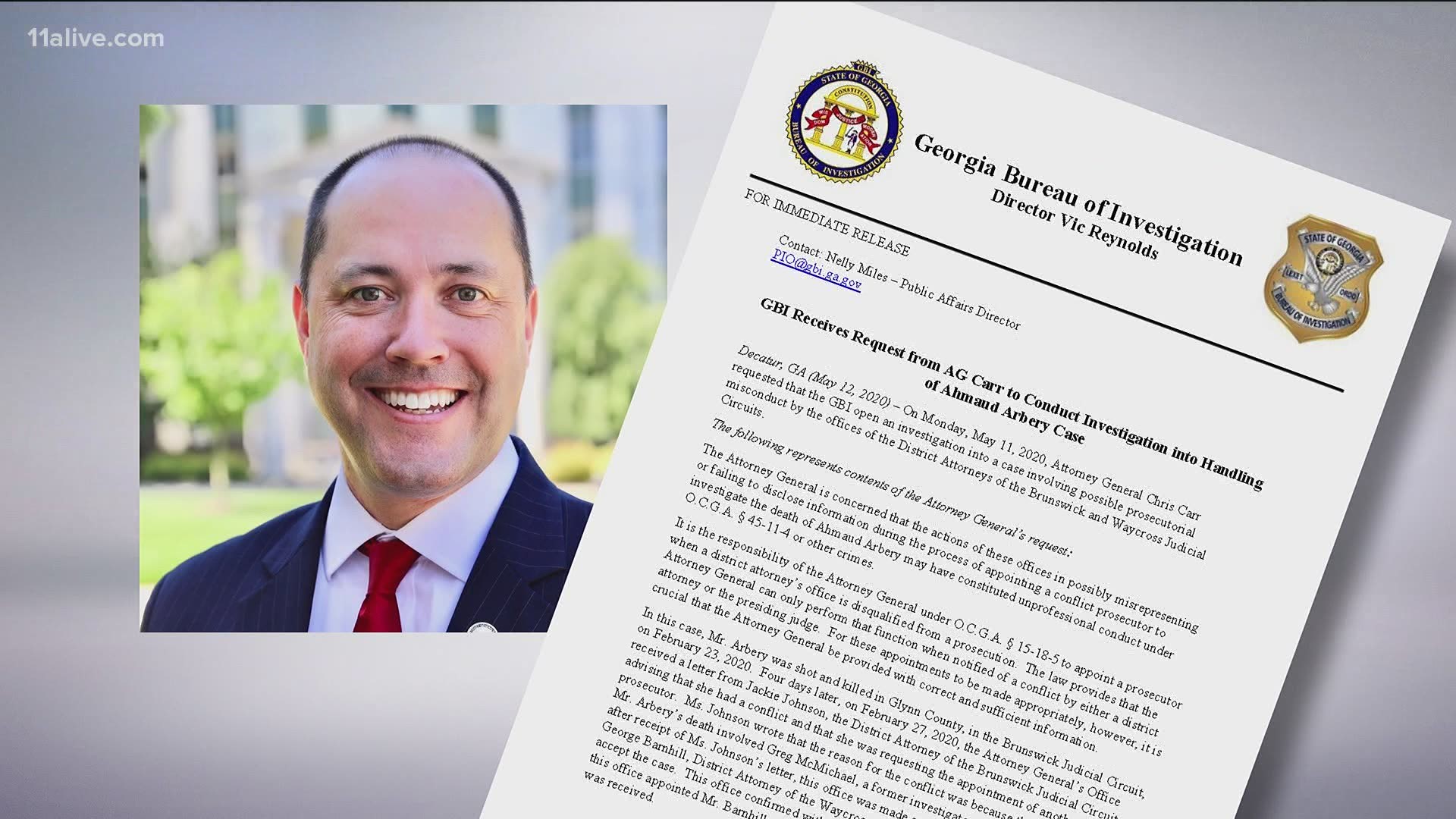 “[I] was stunned and shocked by it,” Attorney General Carr told 11Alive Tuesday morning. “Thankful the video was released so that we could see with our own eyes. I'm a father, I'm a fellow human being and when I saw that, I, too, was shocked and I was sick.”

Carr said despite claims on social media and the fact that his office has been aware of the Ahmaud Arbery shooting since April 7, he had not seen the video until the world saw it.

“Our office did not see the case file. We've never seen evidence. Our role was to appoint conflict counsel, which we did,” Carr explained.

The conflict of interest is now at the center of two investigations into prosecutorial misconduct.

Two days later, on May 12, Carr asked the GBI to also conduct a concurrent investigation into prosecutorial misconduct.

Just hours after Ahmaud Arbery was shot and killed on February 23, public documents reviewed by The Reveal, 11Alive's investigative team, show the Glynn County Police Department called the Office of the District Attorney of the Brunswick Judicial Circuit for advice on how to handle the case.

The officers had realized one of the suspects, Gregory McMichael, was a former police officer who worked in their department and they wanted an outside opinion on the case.

The Reveal has learned, it's the same DA’s office where suspect Gregory McMichael also worked as an investigator until May 2019.

The day after the February 24 shooting, Barnhill echoed the Brunswick DA’s advice, telling police the shooting was “justifiable” and there was "no cause for arresting the McMichaels and William 'Roddy' Bryan", the man who recorded the video of the shooting.

It wasn’t until February 27, four days after the shooting, that the Brunswick DA’s office officially requested a new prosecutor on the case. Barnhill was appointed to take over.

The attorney general’s office said neither the Brunswick DA’s office nor the Waycross DA’s office disclosed Barnhill had already been making decisions in the case or that he too had a conflict.

“The concern we have is, it's incumbent upon district attorneys to determine whether they have a conflict in a particular case [and] weren't notified of the communications or any of the actions that had occurred,” Carr told The Reveal.

On April 2, more than a month after he began handling the Arbery case, Barnhill finally revealed his conflicts, but not to the attorney general's office.

In a letter to Captain Tom Jump of Glynn County Police Department regarding the case, Barnhill explained to the police captain that Ahmaud Arbery’s mother raised some concerns about the fact that Barnhill's son is an investigator in the Brunswick District Attorney’s office where Greg McMichael once worked and also noted that the younger Barnhill had previously prosecuted Arbery.

Barnhill went on to list five reasons why he believes the shooting was “justifiable.”

Barnhill went on to suggest Arbery shot himself as he was struggling with Travis McMichael over the gun even though the official police report from the Glynn County Police Department said, “Travis fired a shot and then a second later there was a second shot.”

According to Attorney General Carr, on April 7, Barnhill informed the AG’s office he was recusing himself from the case. It was then that Barnhill revealed his conflicts to the attorney general’s office.

Carr notes in a May 10 news release, “the request of April 7, 2020 did not provide any reason for the delay in contacting the Office of the Attorney General to request appointment of a new prosecutor since the discovery of those facts.”

Carr went on to say Barnhill told him he learned as of “'about 3-4 weeks ago,' that his son who is employed as a prosecutor in the Brunswick Circuit District Attorney's office, had handled a prior prosecution of Mr. Arbery and that one of the defendants in this case had also served as an investigator on the same prosecution.”

At the time, it had been nine weeks since the shooting and Barnhill had been involved in the Arbery case within the first 24 hours.

The Glynn County Police Department, which has also come under fire for how it handled the investigation, explained in a news release, “it was ultimately decided not to seek out the Georgia Bureau of Investigation (GBI) to review the case [early on in the investigation] given that none of the officers involved in the case were employed with the Police Department, from 1982 to 1989, when Greg McMichael was employed by the department and the officers involved in the case had little to no contact with Mr. McMichael when he was employed by the Brunswick District Attorney’s Office.”